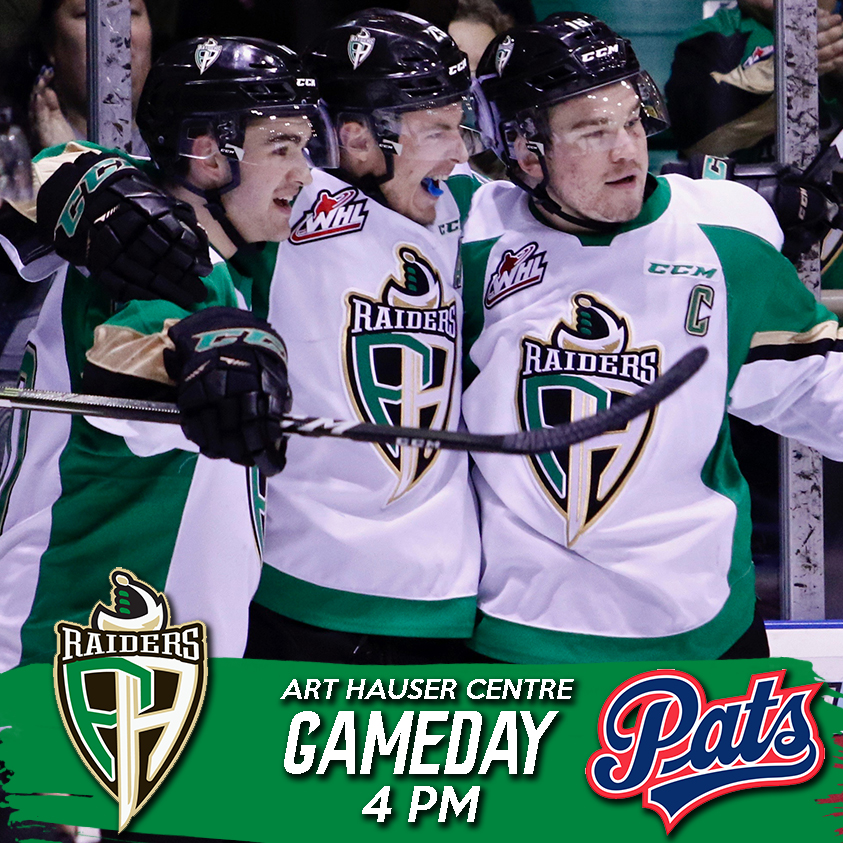 RAIDER REVIEW: The Prince Albert Raiders (8-32-3-2) close out the home-and-home series with the Regina Pats (28-5-6-1) this afternoon at the Art Hauser Centre. Last night, the Raiders dropped a wild 7-6 overtime game against the Pats at the Brandt Centre. The Raiders got out to a great start in the opening 20 minutes. Carson Miller opened the scoring at the 6:24 mark of the period. Curtis Miske made it a 2-0 game before Miller tallied his second of the period.  Then, Jordy Stallard scored with 1:28 to play in the period to give the Raiders a 4-0 lead after the first. In the second, the Pats cut into the lead 17 seconds into the period when Bryan Lockner scored. Jeff de Wit and Dawson Leedahl also scored in the period to make it a 4-3 game after two. Parker Kelly restored the Raiders’ two-goal lead with a shorthanded goal in the third. About a minute later, Nick Henry made it a one-goal game again with a power-play goal. Spencer Moe then put the Raiders up 6-4 with a bar-down wrist shot. However, Jake Leschyshyn scored to make it 6-5. Adam Brooks sent the game to overtime with his goal with 8.5 seconds remaining. Brooks then ended the game 18 seconds into overtime. Nicholas Sanders got the start in goal for the Raiders, making 29 saves in the loss. Mad Paddock took over in goal in the second period for the Pats and stopped 13 shots for the win.

VS. REGINA: This is the seventh meeting of the year between the Raiders and the Pats. The Raiders are winless at home against the Pats this season.

OFFENSIVE EXPLOSION: The Raiders offence has been clicking lately, culminating in a six-goal performance on Saturday night in Regina. That tied the Raiders’ highest amount of goals scored in a game this season. The Raiders previously defeated the Kootenay ICE 6-0 in November. Since the trade deadline, the Raiders are averaging 5.3 goals per game.

NEXT UP: The Raiders hit the road for four games in five nights beginning on Wednesday in Cranbrook against the Kootenay Ice. The next Raiders’ home game is on Friday, January 27 against the Lethbridge Hurricanes on Canada 150 Night. The Raiders will be wearing special jerseys that evening celebrating the three Prime Ministers with ties to Prince Albert. Tickets can be purchased here, in the Raider Office, or by calling 306-764-5348.