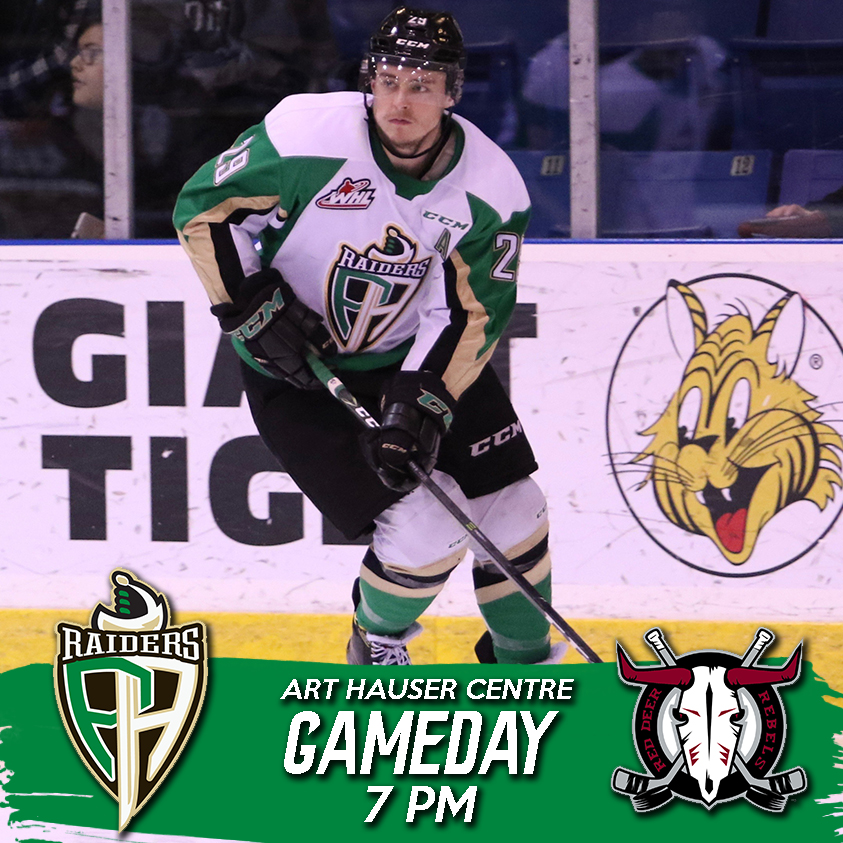 RAIDER REVIEW: The Prince Albert Raiders (13-35-3-2) welcome the Red Deer Rebels (22-21-5-3) into the Art Hauser Centre for the final time this season. In the Raiders’ last game, Max Martin scored a power-play goal with 6.7 seconds remaining to lift P.A. to a 3-2 win over the Broncos in Swift Current on Sunday afternoon. Cavin Leth opened the scoring in the first period when he batted a puck out of mid air past Jordan Papirny. After the Broncos took a 2-1 lead heading into the third period, Curtis Miske made it a 2-2 game midway through the final period. It was the first time this season that the Raiders defeated the Broncos. Nicholas Sanders stopped 27 shots to pick up his fifth win in six games.

VS. RED DEER: This is the last meeting of the year between the Raiders and the Rebels. Brayden Pachal scored a late power-play goal to lead the Raiders to a 3-2 win over the Rebels in Red Deer the last time these two teams met. When these teams played three weeks ago at the Art Hauser Centre, Adam Musil scored with 3:08 remaining to give the Rebels a 4-3 win.

JANUARY RECAP: The Raiders ended 2017’s first month as winners of five of their last six games. January was also the Raiders’ busiest month of the season. They compiled a 5-7-2-1 record in the month for a total of 13 points.

TOP PROSPECT: Raiders goaltender Ian Scott got the start in goal for Team Cherry on Monday night at the Sherwin-Williams CHL/NHL Top Prospects Game in Quebec City, QC. The 18-year-old stopped 13 of the 17 shots he faced in Team Cherry’s 7-5 win over Team Orr. The next day, Scott was ranked 40th amongst players for the 2017 NHL Draft in TSN’s Mid-Season Rankings.

GETTING IN RHYTHM: Nicholas Sanders has been on a tear since picking up his first win with the Raiders two weeks ago against the Red Deer Rebels. Including that night, Sanders has five wins, a 2.83 goals-against average and a 0.915 save percentage.

POWER SURGE: The Raiders’ power play has been clicking of late. Over the last four games, the Raiders have converted on six of 13 chances with the man advantage, including all three goals in Sunday’s win over the Swift Current Broncos.

NEXT UP: The Raiders are hit the road for three games next week, beginning on Wednesday night against the Medicine Hat Tigers at the Canalta Centre. The Raiders return home on Wednesday, February 15 when they host the Brandon Wheat Kings. Tickets can be purchased at raiderhockey.com, in the Raider Office, or by calling 306-764-5348.