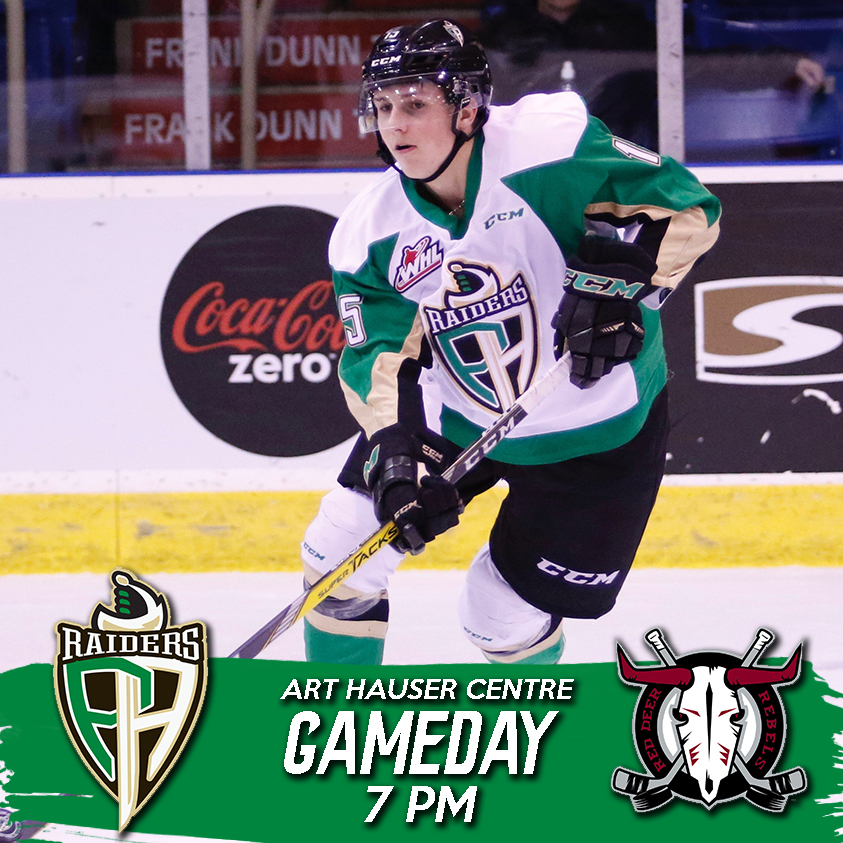 RAIDER REVIEW: The Prince Albert Raiders (8-31-2-2) start a “three in three” tonight when they host the Red Deer Rebels (19-17-4-2) at the Art Hauser Centre. On Wednesday, the Raiders came from behind twice to erase a couple of two-goal deficits, but ultimately fell 5-4 in overtime to the Calgary Hitmen. After Calgary opened a 2-0 lead in the first period, Adam Kadlec and Kolten Olynek drew the Raiders even by the 10:53 mark of the period. The Hitmen scored two consecutive goals again, including a goal five seconds into the third period to take a 4-2 lead. The Raiders battled back again as newcomer Jordy Stallard and overager Cavin Leth found the back of the net in the third period to send the game to overtime. In the extra frame, Vladislav Yeryomenko scored the game-winning goal at the 2:11 mark. Ian Scott made 27 saves in the loss for the Raiders, including a couple of point-saving saves late in the third period. Trevor Martin got the win in goal for the Hitmen.

VS. RED DEER: Friday is the second meeting of the season between the Raiders and the Rebels and the first in Prince Albert. In October, the Raiders fell 3-1 to the Rebels in Red Deer. Nicholas Sanders made 32 saves his first game with the Raiders and Tim Vanstone scored the team’s lone goal. Michael Spacek, Brandon Hagel and Josh Mahura all found the back of the net for Red Deer.

FAMILIAR FACES: Friday night marks the third consecutive home game that the Raiders have played a former player. Tonight, Austin Glover returns to the Art Hauser Centre for the first time since being traded on Dec. 28. In return for the overage centreman, the Raiders received 1999-born forward D-Jay Jerome and a third-round pick in the 2017.

CZECH MATES: World Junior teammates become opponents on Friday night. Adam Musil and Michael Spacek teamed up with Vojtech Budik and Simon Stransky for Team Czech Republic at the annual tournament. The Czechs were eliminated by Canada in the quarter-finals on Jan.2.

DOUBLING UP: Raiders forward Adam Kadlec recorded the first multi-point game of his WHL career on Wednesday night, picking up a goal and an assist in an overtime loss to the Hitmen. Kadlec now has points in three of the last four games.

NEXT UP: The Raiders open up a home-and-home series with the Regina Pats on Saturday night at the Brandt Centre. Game time is 7 p.m. The second leg of the series is on Sunday afternoon at the Art Hauser Centre. Puck drop is 4 p.m. Tickets can be purchased here, in the Raider Office, or by calling 306-764-5348.