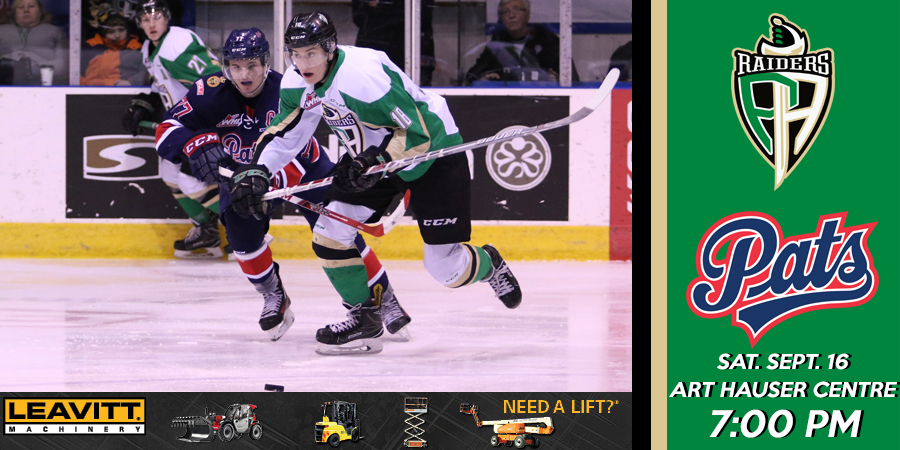 RAIDER REVIEW: The Raiders earned their second win of the WHL Pre-season last night in Regina when they downed the Pats 3-2 in a shootout. Devon Skoleski celebrated his 20th birthday last night by scoring the only goal in the shootout, which came in the eighth round. Nikita Krivokrasov and Justin Nachbaur also scored for the Raiders. Curtis Meger picked up the win by making 19 saves in about 35 minutes of action. He was also perfect in the shootout.

MAKING THEIR DEBUTS: Skoleski and two other Raiders made their pre-season debuts on Friday night. Nicholas Sanders got the start in goal and turned aside all 14 shots faced in just more than 30 minutes of game time. Max Martin also played in Friday night’s game. He hit the crossbar in the seventh round of the shootout.

BREAKING THE STREAK: When Nikita Krivokrasov scored with 3:55 remaining the in the first period of Friday’s game, he stopped Sean Montgomery’s scoring streak. Previously, Montgomery had scored the Raiders’ last four goals, including the tying and game-winning goal in Sept. 8’s game against the Saskatoon Blades. Montgomery was held pointless on Friday night in Regina.

STICKING AROUND: All four Raiders invited to NHL rookie camps will be away from the team for a little while longer. Vojtech Budik (Buffalo), Parker Kelly (Ottawa), Ian Scott (Toronto), and Jordy Stallard (Winnipeg) will take part in their respective team’s training camps, all of which opened earlier this week.

ROAD TRIP: The Raiders are sending a fan bus to Moose Jaw for the Warriors’ home opener at Mosaic Place on Saturday, September 23. The bus leaves at the Art Hauser Centre at 2:30 p.m. and will have Coca-Cola and pizza for the ride. A maximum of 45 tickets will be available and are on sale now in the Raider Office. Call 306-764-GAME for more information.

NEXT UP: The 2017-18 WHL Regular Season opens in less than three weeks when the Raiders host the Moose Jaw Warriors on Friday, September 22 at the Art Hauser Centre. Puck drop is at 7 p.m. Single-game tickets and flex packs are now on sale at the box office or the Raider Office Monday to Friday from 9 a.m. to 5 p.m.