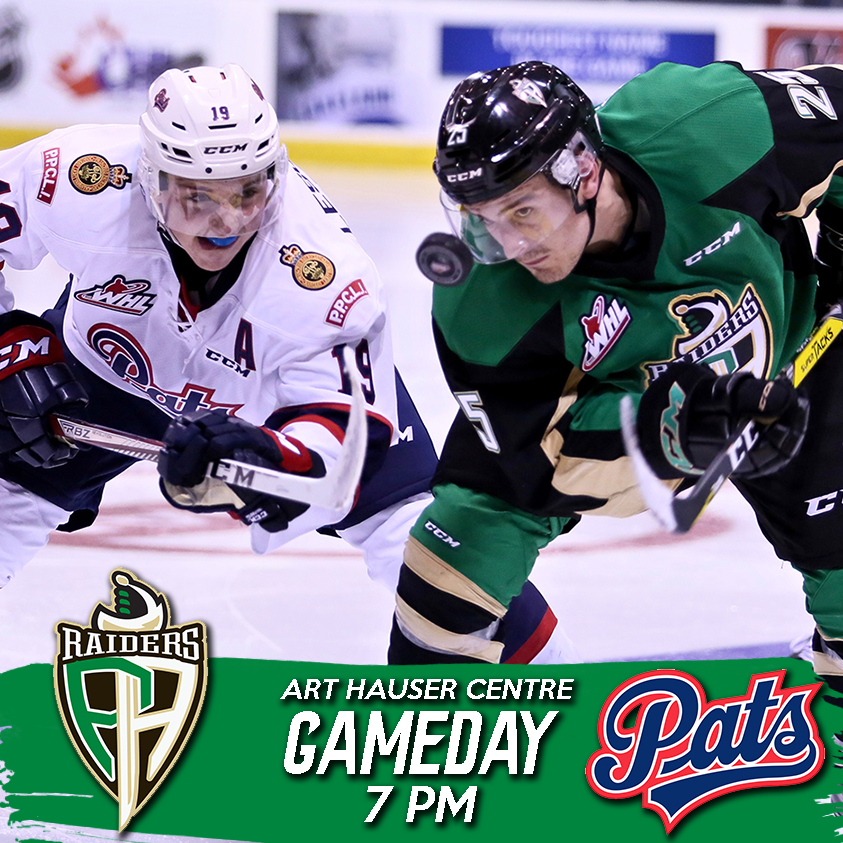 RAIDER REVIEW: The Prince Albert Raiders (8-27-1-1) close out the calendar year when they host the Regina Pats tonight at the Art Hauser Centre. In their last game, the Raiders’ comeback attempt fell short in a 3-2 loss to the Saskatoon Blades at the SaskTel Centre. The Blades opened the scoring with five seconds left in the first period. They added another midway through the second to take a 2-0 lead into the final period. With approximately five minutes remaining, Carson Miller picked up a power-play goal to cut the lead to one. However, the Blades quickly responded to restore their two-goal lead. Miller brought his team back within one again, causing a turnover at the Blades’ blueline and beating netminder Brock Hamm. The Raiders weren’t able to get any closer, despite having a couple of quality chances with the extra attacker. Ian Scott was between the pipes for the Raiders, stopping 39 of 42 shots faced.

VS. REGINA: This is the fourth meeting of the season between the Raiders and the Pats and the second at the Art Hauser Centre. The Pats won the first contest between the teams in Prince Albert in September.

MAKING MOVES: The Raiders were active on the trade front again on Wednesday, acquiring 1999-born rookie forward D-Jay Jerome and a third-round pick in the 2017 WHL Bantam Draft from the Red Deer Rebels in exchange for overage centre Austin Glover. Jerome, who hails from Lethbridge, AB, had five goals and three assists in 23 games with the Rebels this season. Glover’s time in Prince Albert came to an end after playing in 113 games over the course of three seasons. He had 32 goals and 53 assists with the Raiders.

WELCOME BACK: With the departure of Glover, the Raiders were able to bring overage centre Kolten Olynek back into Hockey Town North. Olynek was waived by the Raiders in October prior to the 20-year-old deadline. He was picked up by the Blades, but released from Saskatoon in December. Including Wednesday night’s contest against the Blades, Olynek has seven goals and six assists in 32 games played.

NEXT UP: The Raiders get an early start to 2017 when they travel to Regina on New Year’s Day to close out the home-and-home holiday series with the Pats for a Sunday matinee. Puck drop in the provincial capital is set for 4 p.m. The next Raiders’ home game is on Tuesday when the Moose Jaw Warriors visit the Art Hauser Centre. Game time is 7 p.m. Tickets are available here, at the Raider Office or by calling 306-764-5348.