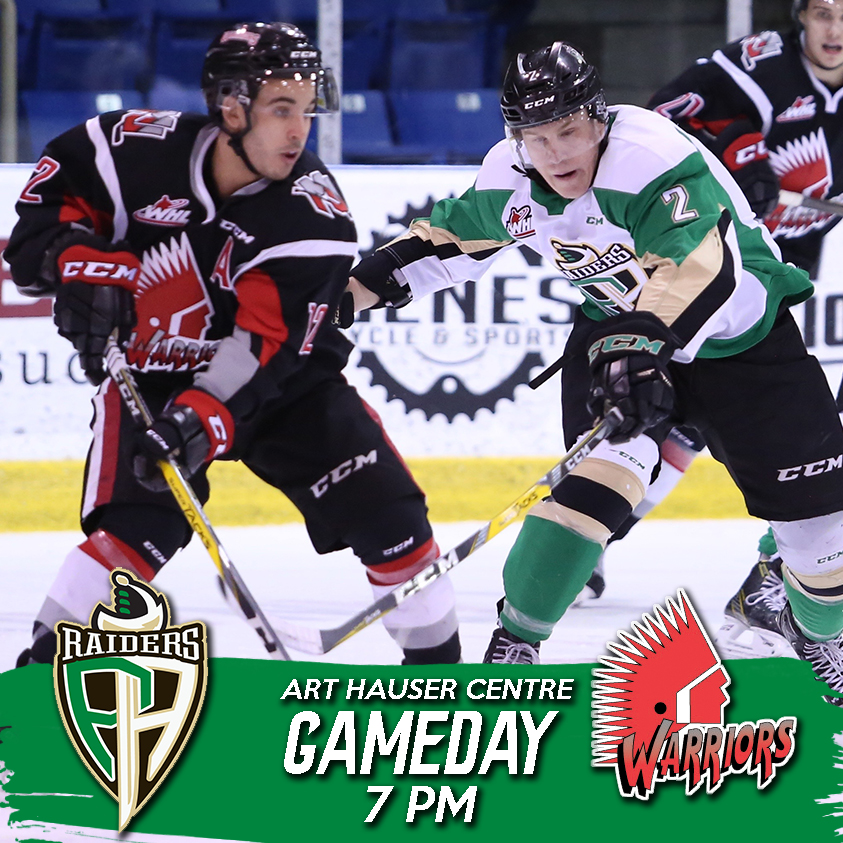 RAIDER REVIEW: The Prince Albert Raiders (11-35-3-2) continue their three games in three nights when they host the Moose Jaw Warriors (30-12-6-1) tonight at the Art Hauser Centre. The Raiders had their three-game winning streak snapped on Friday night in a 5-4 loss to the Lethbridge Hurricanes at the Art Hauser Centre. The Hurricanes stormed out to an early lead with three first-period goals, which also ended Nicholas Sanders’ night in net for the Raiders. Kolten Olynek got the Raiders on the board 58 seconds into the second period. However, Lethbridge responded about a minute later to make it a three-goal game again. The Raiders got back within one with two goals in 14 seconds. First, Cavin Leth beat Stuart Skinner with a snap shot off the rush. Then, Nick Heid redirected Tim Vanstone’s shot past Skinner to bring the Raiders within one heading into the third. Ryan Bowen restored a two-goal advantage for Lethbridge 1:46 into the third, however. Leth tallied his second goal of the game at the 8:39 mark of the final period, but it was as close as the Raiders would get. Scott made 17 saves in relief, but was saddled with the loss.

VS. MOOSE JAW: This is the seventh of eight meetings between the Raiders and the Warriors this season and the last one at the Art Hauser Centre. In the last game between the two clubs, the Raiders fought back, but fell 6-5 in a shootout to the Warriors in Prince Albert. Carson Miller had a goal and an assist, including the game-tying goal with 1:50 left in regulation to win the Raiders a point.

OFF TO QUEBEC: Raiders goaltender Ian Scott will miss the next two games as travels to Quebec City for the Sherwin-Williams CHL/NHL Top Prospects Game. Scott will represent the Raiders as a member of Team Cherry during the game that showcases the best draft eligible prospects in the CHL on Monday night. Curtis Meger has been recalled from the SJHL’s Estevan Bruins to fill Scott’s spot on the roster.

NEXT UP: The Raiders finish off their weekend with a trip to Swift Current to take on the Broncos at the Credit Union i-Plex. Puck drop is 4 p.m. on Sunday. The next Raiders home game is on Friday, February 3 when they host the Red Deer Rebels. Game time is 7 p.m. Tickets can be purchased here, in the Raider Office, or by calling 306-764-5348.