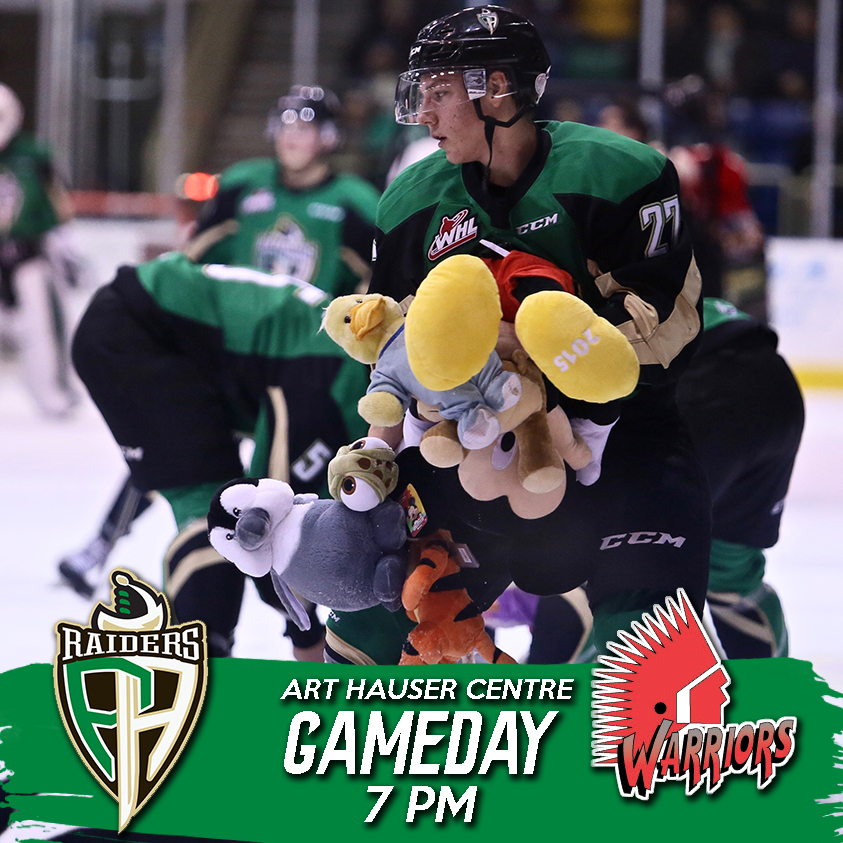 RAIDER REVIEW: The Prince Albert Raiders (6-22-1-0) renew their rivalry with the Moose Jaw Warriors (16-6-4-1) on Teddy Bear Toss Night presented by Canadian Tire at the Art Hauser Centre. In their last time out, the Raiders were downed 3-2 by the Calgary Hitmen at home on Tuesday night. After Carsen Twarynski opened the scoring in the second period, Sean Montgomery responded with his eighth goal of the year. Beck Malenstyn broke the deadlock, but Simon Stransky potted a rebound with 50 seconds remaining in the middle frame to make it 2-2 after two. In the third, Jordy Stallard scored the game-winning goal for Calgary on a power play with 4:13 remaining in the third. Ian Scott got the start in net for the Raiders, making 39 saves – including 19 in the second period – in the loss.

VS. MOOSE JAW: This is the third of eight meetings between the Raiders and the Warriors this season and the second of four at the Art Hauser Centre. In the previous meeting, a two-goal game from Simon Stransky paced the Raiders to a 5-3 home win over the Warriors. Cavin Leth, Austin Glover and Max Martin also found the back of the net in the Raiders’ win. Ian Scott stopped 31 shots to pick up his fifth win of the season.

MAKING IT RAIN: Tonight is the Canadian Tire Bear Toss. Following our first goal, fans will throw their stuffed animals onto the ice. Here’s a look back the last three Teddy Bear Toss goal scorers:

HEADING TO CAMP: Simon Stransky and Vojtech Budik have a chance to represent their country. The pair from the Czech Republic were invited to their country’s training camp for the 2017 World Junior Hockey Championship. Stransky played on the team last year, picking up a goal in five games. Budik skated for the Czech Republic at last spring’s IIHF World U18 Championships. The 2017 World Junior Hockey Championship runs from Boxing Day until January 5 in Montreal and Toronto.

MAC’S-IUMUM EFFORT: Five Raiders prospects will be spending their holiday break in Calgary at the prestigious Mac’s Midget AAA World Invitational Tournament. Pools for the annual tournament were announced on Wednesday afternoon. 2015 WHL Bantam Draft picks Tyler Lowe and Chase Felgueiras lead the Calgary Northstars into the tournament. As for the Class of 2016, Quinn Olson and the Calgary Buffaloes will be playing in the Mac’s. Also, Adam Herold and Eric Pearce will suit up for the Regina Pat Canadians.

NEXT UP: The Raiders finish off the weekend home-and-home series with the Warriors on Saturday night in Moose Jaw at Mosaic Place. Game time is 7 p.m. The next Raiders’ home game is Tuesday, December 13 against the Edmonton Oil Kings on Santa Anonymous Night presented by the Prince Albert Optimist Club. Fans are encouraged to bring a new, unwrapped present for donation to the Salvation Army. Tickets are available at raiderhockey.com, at the Raider Office or by calling 306-764-5348.