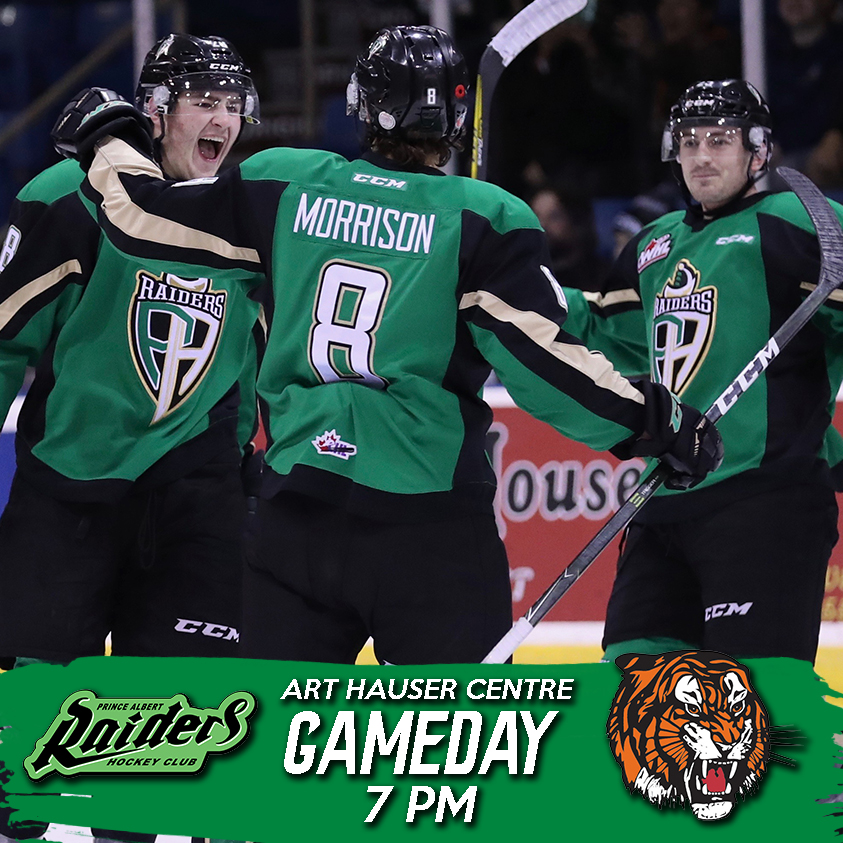 RAIDER REVIEW: The Prince Albert Raiders (5-17-1-0) try to get back in the win column tonight on Saskatchewan Rush Night at the Art Hauser Centre against the Medicine Hat Tigers (18-5-1-0). On Wednesday, the Raiders played their first home game in nearly two weeks, but fell 3-1 to the Swift Current Broncos. The Raiders came out of the gate with a strong push, getting the game’s first 12 shots. However, Ryan Graham opened the scoring for Swift Current early in the second period. Later in the second, Cavin Leth tallied a power-play goal to make it a 1-1 game after two. In the third, Graham notched his second of the game to put the Broncos ahead. Max Lajoie sealed the game by scoring into the empty net. Nicholas Sanders got the nod between the pipes for the Raiders, stopping 28 shots in a losing effort.

VS. MEDICINE HAT: This is the first of four meetings between the Raiders and the Tigers this season. Last year, the Raiders won three of the four games against the Tigers. The only loss came in the final meeting of the season when the Tigers scored three goals in the final four minutes to steal the game.

FEEL THE RUSH: Tonight is Saskatchewan Rush Night at the Art Hauser Centre in support of Prince Albert Minor Lacrosse, as well as celebrating the Rush’s 2016 National Lacrosse League championship. The Raiders will wear Rush-inspired jerseys tonight, which will be available via silent auction online and throughout the game until third period. A select few jerseys will be auctioned off live in the Ches Leach Lounge following the game.

NEWEST SIGNING: On Thursday, the Raiders announced the signing of 1999-born defenceman Austin Crossley. The 6’0”, 204-pound Fort St. John, BC product started the season in the BCHL with the Nanaimo Clippers, picking up a goal and an assist i 25 games played this year. Crossley participated in the Raiders’ 2015 training camp. He also captained Team B.C. to an undefeated gold-medal effort at the 2016 National Aboriginal Hockey Championship in Mississauga, ON.

NEXT UP: The Raiders hit the road for a mid-week jaunt to Alberta to take on the Tigers in Medicine Hat on Tuesday and the Hurricanes in Lethbridge on Wednesday. Both games begin at 8 p.m. The next home game for the Raiders is on Friday, December 2 when they host the Moose Jaw Warriors. Puck drop is 7 p.m. Tickets can be purchased online, in the Raider Office, or by calling 306-764-534