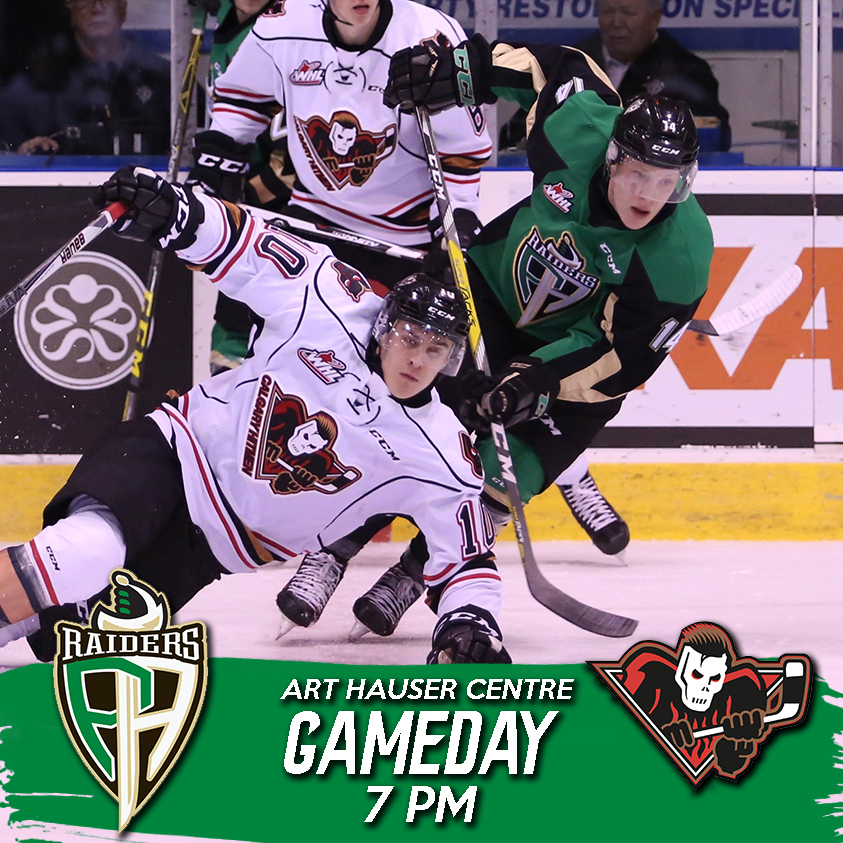 RAIDER REVIEW: The Prince Albert Raiders (8-31-1-2) open a stretch of four games in five nights tonight when they host the Calgary Hitmen (14-19-4-2) tonight. The Raiders are trying to snap a losing skid after falling to the Swift Current Broncos 5-2 on Saturday night Speedy Creek. Kolten Olynek opened the scoring for the Raiders, netting his first goal since rejoining the team at the end of December. The Broncos responded with two goals to close out the first period and added another early in the third. Simon Stransky got the Raiders back within one with his first power-play goal of the season to make it 3-2. However, Swift Current scored twice in the final 13 minutes of the third period to round out the scoring.  Ian Scott got the start and made 33 saves in a losing effort.

VS. CALGARY: Wednesday night is the third of four meetings between the Raiders and the Hitmen this season. It’s the final time Calgary comes to Prince Albert this season. These teams last played on Dec. 6 in Prince Albert with Calgary pulling out a 3-2 victory. Sean Montgomery and Simon Stransky scored the Raiders’ goals in the loss.

SWAPING DEFENCEMEN: The Raiders exchanged rearguards with the Victoria Royals on Monday morning, acquiring 1999-born defenceman Brayden Pachal and a sxith-round pick in the 2017 WHL Bantam Draft in exchange for 1997-born defenceman Loch Morrison and a fourth-round pick in the 2017 draft. Pachal, who is listed at 6’0” and 195 lbs, has three assists in 35 games this season. The Estevan product is already familiar with one member of the Raiders, playing on the Estevan Bantam AA Bruins with Cole Fonstad in the 2013-14 campaign.

DEADLINE DEAL: The Raiders acquired 1997-born centreman Jordy Stallard and a sixth-round draft pick from the Calgary Hitmen in exchange for 1998-born forward Luke Coleman and a fourth-round draft pick at the trade deadline. Stallard is expected to be in the lineup on Wednesday night against his former team.

STREAKING: Speaking of Cole Fonstad, the Raiders’ rookie is riding a three-game point streak into Wednesday night’s contest against the Calgary Hitmen. Fonstad has a goal and two assists in that span, bringing his total to seven goals and eight assists on the season. With 15 points, the rookie is fourth on the team in scoring.

NEXT UP: The Raiders return are back at it on Friday night when the host Austin Glover and the Red Deer Rebels. Puck drop is 7 p.m. Then, the team begins a home-and-home series with the Regina Pats on Saturday, with the Prince Albert leg being played on Sunday afternoon at the Art Hauser Centre. Tickets can be purchased at raiderhockey.com, in the Raider Office, or by calling 306-764-5348.