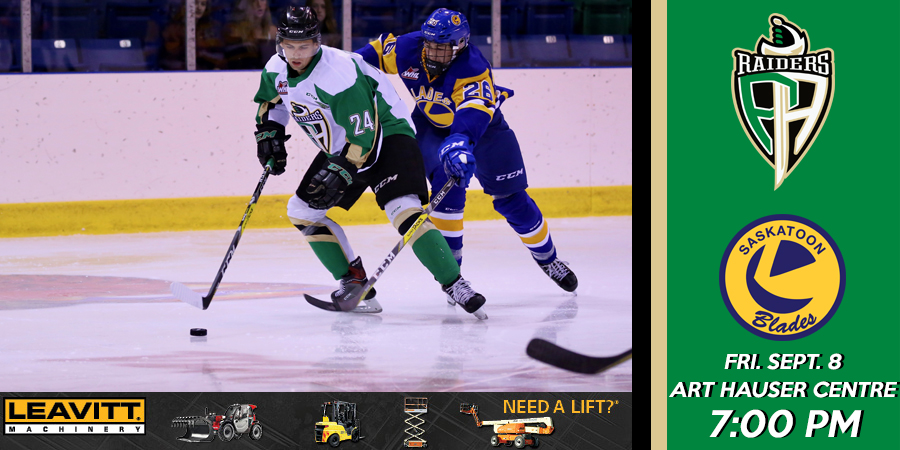 Tickets on sale at the Raider Office. Adults are $10; Children are $5

RAIDER REVIEW: The Raiders opened the 2017 WHL Pre-season with a 4-3 loss to the Saskatoon Blades on Sunday afternoon at the Art Hauser Centre in the Young Guns Game. D-Jay Jerome had a goal and an assist in the loss to lead the Raiders’ offensive output. Nikita Krivokrasov and Spencer Moe also found the back of the net. Goaltender Ian Scott made 24 saves in a losing effort.

O CAPTAIN! MY CAPTAIN!: The Prince Albert Raiders announced their leadership group earlier this week. Curtis Miske will be the 41st captain in Raiders history. Parker Kelly, Brayden Pachal, and Jordy Stallard will serve as alternates.

IN THE BIG LEAGUES: Four Prince Albert Raiders have left to take part in NHL training camps. Ian Scott (Toronto, 2017 Fourth Round) and Parker Kelly (Ottawa, Invite) will square off in a rookie tournament at Ricoh Coliseum this weekend. Vojtech Budik has joined the Buffalo Sabres (2016, Fifth Round) for this weekend’s Prospects Challenge at the Harbour Centre. Jordy Stallard is off to BC with the Winnipeg Jets (2016, Fifth Round) for the 2017 Penticton Young Stars tournament that opens on Friday night.

RE-ASSIGNED: The Raiders re-assigned ’01-born defenceman Adam Herold to the Regina Pat Canadians (SMHL) on Thursday afternoon. Herold, a second round pick of the Raiders in the 2016 WHL Bantam Draft, two goals and nine assists in 43 regular season games as the Pat Canadians won the SMHL Championship and qualified for the Telus Cup.

HOME OPENER: The 2017-18 WHL Regular Season opens in less than three weeks when the Raiders host the Moose Jaw Warriors on Friday, September 22 at the Art Hauser Centre. Puck drop is at 7 p.m. Single-game tickets and flex packs are now on sale online or the Raider Office Monday to Friday from 9 a.m. to 5 p.m.

NEXT UP: The Raiders conclude the home-and-home series with the Blades tomorrow night in Warman at the Legends Centre. Puck drop is 7 p.m. The next home game is on Saturday, September 16 when the Regina Pats head to the Art Hauser Centre.