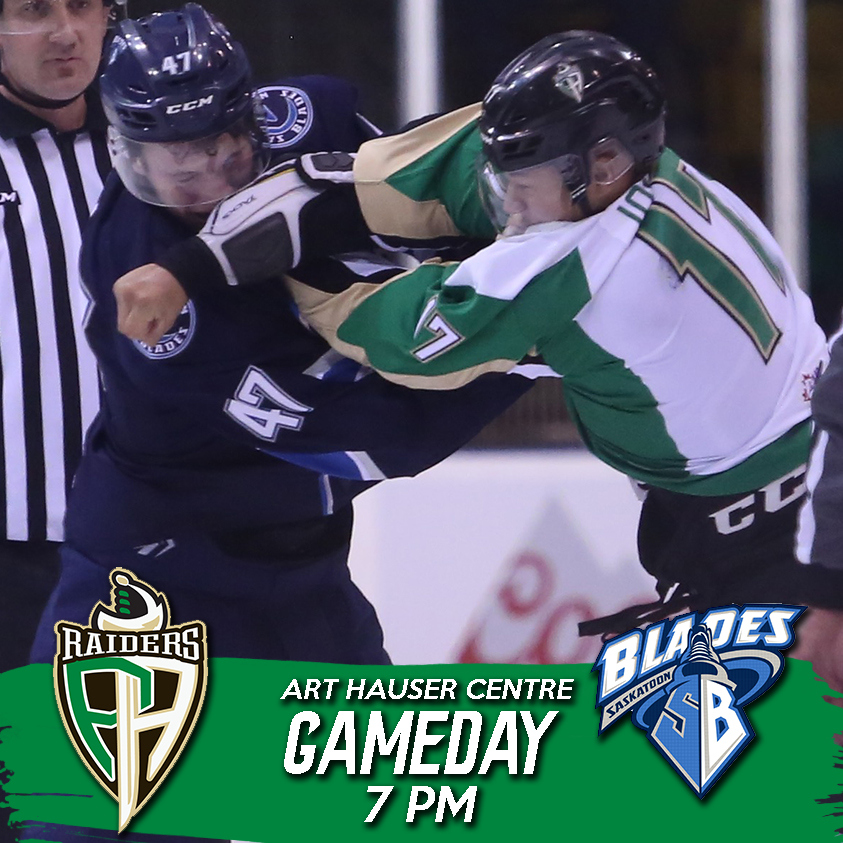 RAIDER REVIEW: The Prince Albert Raiders (16-40-4-2) finish off their weekend home-and-home series with the Saskatoon Blades (24-29-6-2) tonight at the Art Hauser Centre. In the first leg of the weekend set, Logan Flodell made 29 saves to backstop the Blades to a 3-1 victory over the Raiders. After both goalies stood their ground in the first period, Josh Paterson opened the scoring seconds after a Raiders’ penalty expired to put the Blades up 1-0. Less than two minutes later, Curtis Miske continued his hot streak by scoring his 11th goal as a Raider to tie the game. However, about 30 seconds later, Braylon Shmyr finished off a backdoor pass from Mason McCarty to restore Saskatoon’s one-goal advantage. Late in the third, Libor Hajek was allowed to walk in from the point and he snapped a shot past Raiders goaltender Ian Scott to put the Blades up 3-1. Scott was pulled for the extra attacker for the remainder of the game, but the Raiders were unable to generate another goal. In the losing effort, Scott stopped 20 shots.

VS. SASKATOON: This is the sixth game this season between the Raiders and the Blades and third at the Art Hauser Centre. The Raiders have split the games with the Blades in Prince Albert so far this season.

PUTTING UP POINTS: Raiders defenceman Brayden Pachal is helping set up the team’s offence. The Estevan product has an assist in three straight games after picking up a helper on Curtis Miske’s goal last night in Saskatoon. It’s the 17-year-old’s second point streak of three or more games since joining the club at the WHL Trade Deadline. Pachal has two goals and eight assists since being acquired from the Victoria Royals.

SUSPENSION SERVED: Raiders winger Kolby Johnson is eligible to return tonight after serving a three-game suspension following a charging major and a game misconduct for his hit on Everett Silvertips forward Orrin Centazzo.

NEXT UP: The Raiders continue their home stand on Wednesday night when the Medicine Hat Tigers visit the Art Hauser Centre. Game time is 7 p.m. Then, the Raiders host the Lethbridge Hurricanes on Friday night and the Kootenay ICE on Autism Awareness Night on Saturday. Both weekend games begin at 7 p.m. Tickets can be purchased here, in the Raider Office, or by calling 306-764-5348.