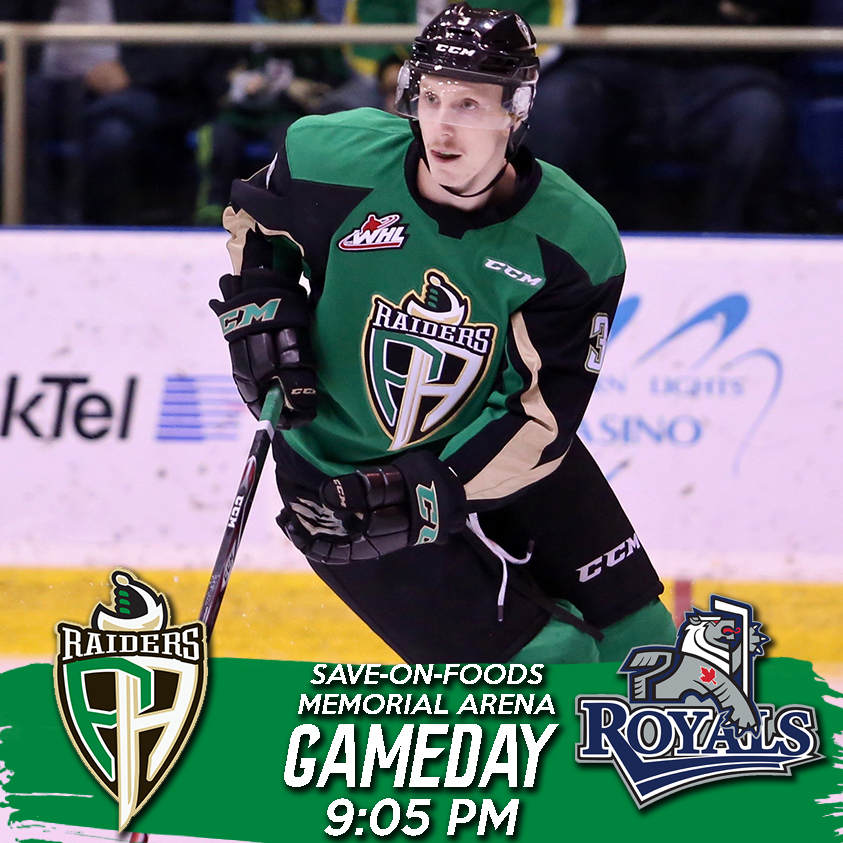 RAIDER REVIEW: The Prince Albert Raiders (5-13-1-0) hit the midway point of their B.C. road trip tonight when they visit the Victoria Royals (11-8-2-0) at the Save-On-Foods Memorial Arena.  The Raiders are coming off a tough 7-1 loss to the Kelowna Rockets on Saturday night at Prospera Place. Simon Stransky scored the Raiders’ lone goal of the game in the third period to break Michael Herringer’s shutout attempt.  The Rockets used their power play to take control of the game early, scoring their first four goals with the man advantage. Jake Kryski had a pair of goals for the Rockets, while five Kelowna players finished the game with three points. Ian Scott started for the Raiders and made 27 saves in the loss.

VS. VICTORIA: The Raiders play their lone meeting with the Royals this season. In the only meeting between the teams last year, Victoria edged the Raiders 3-2 in overtime at the Art Hauser Centre. Hunter Warner and Jesse Lees provided the goals for the Raiders in the loss. Vladimir Bobylev found the back of the net in overtime for the Royals. In the last contest in Victoria, the Raiders were blanked 1-0.

RECENT HISTORY: The Raiders have struggled over the last five years against the Royals, winning once in five matchups. The Raiders’ last win in Victoria was on January 29, 2013. Leon Draisaitl scored the lone goal in the shootout as the Raiders prevailed 6-5.

PAYING FOR PENALITES: The Kelowna Rockets made the Raiders pay for going to the penalty box on Saturday night, scoring on four of their five opportunities with the man advantage. However, that hasn’t been the norm of late for the Raiders. Heading into Saturday night’s game, the Raiders had allowed just one goal in their past 28 times shorthanded.

MILESTONES: A couple of Raiders have passed career games played milestones so far on this road trip. On Friday night in Kamloops, Simon Stransky played in his 150th career WHL game. On Saturday, captain Tim Vanstone suited up for his 250th game in the WHL. Luke Coleman also celebrated a milestone on Saturday night, dressing in his 100th career game. All three players have played their entire WHL careers with the Raiders.

NEXT UP: The Raiders start the home stretch of their B.C. road trip tomorrow night at the Langley Events Centre against the Vancouver Giants. Game time is 9 p.m. CST. The Raiders return home to the Art Hauser Centre on Wednesday, November 23 when they host the Swift Current Broncos, followed by Saskatchewan Rush Night on Friday, November 25’s home game against the Medicine Hat Tigers. Both home contests begin at 7 p.m.