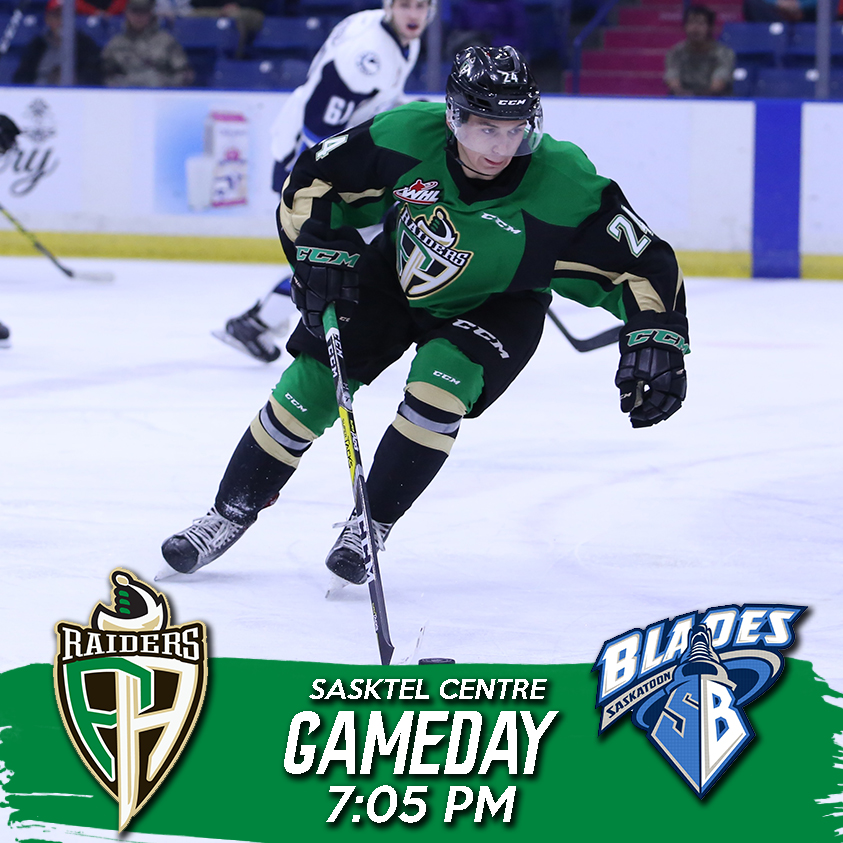 RAIDER REVIEW: The Prince Albert Raiders (16-39-4-2) open a home-and-home series with the Saskatoon Blades (23-29-6-2) on Friday night at SaskTel Centre. The Raiders are coming off of a 3-2 overtime loss to the Regina Pats on Family Day. Sean Montgomery opened the scoring with a power-play goal midway through the first. Dawson Leedahl tied the game up early in the second period. Midway through the middle frame, Tim Vanstone gave the Raiders a 2-1 lead with his 11th of the season. However, with 13 seconds to play in the period, Josh Mahura tied the game again. Ian Scott was stellar in the third period for the Raiders, stopping all 16 shots fired his way to send the game to overtime. In the extra frame, Leedah tallied his second to give the Pats the win. Scott finished the game with 41 saves in a losing effort.

VS. SASKATOON: This is the fifth contest this season between the Raiders and the Blades. In the last meeting between the two teams, Carson Miller scored two third period goals for the Raiders, but it wasn’t enough to complete the comeback as they fell 3-2 to the Blades in Saskatoon.

JOHNSON SUSPENDED: Kolby Johnson will serve the final game of a three-game suspension this evening. Johnson was suspended after receiving a five-minute major for charging and a game misconduct for his body check on Orrin Centazzo on Feb. 17 against the Everett Silvertips.

SETTING A NEW BAR: With his goal on Monday afternoon against the Regina Pats, Raiders captain Tim Vanstone set a new career high in points with 27, surpassing his previous mark of 26 from last season. The five-year Raider has increased his point production every season and has 11 games remaining to add to his new career high. Vanstone now has 91 career points in 288 games.You

NEXT UP: The Raiders finish off the home-and-home series with the Blades on Saturday night at the Art Hauser Centre. Puck drop is 7 p.m. That game opens a six-game homestand for the Raiders, featuring games against the Medicine Hat Tigers, Lethbridge Hurricanes and our Autism Awareness Night against the Kootenay ICE. Tickets can be purchased at raiderhockey.com, in the Raider Office, or by calling 306-764-5348.