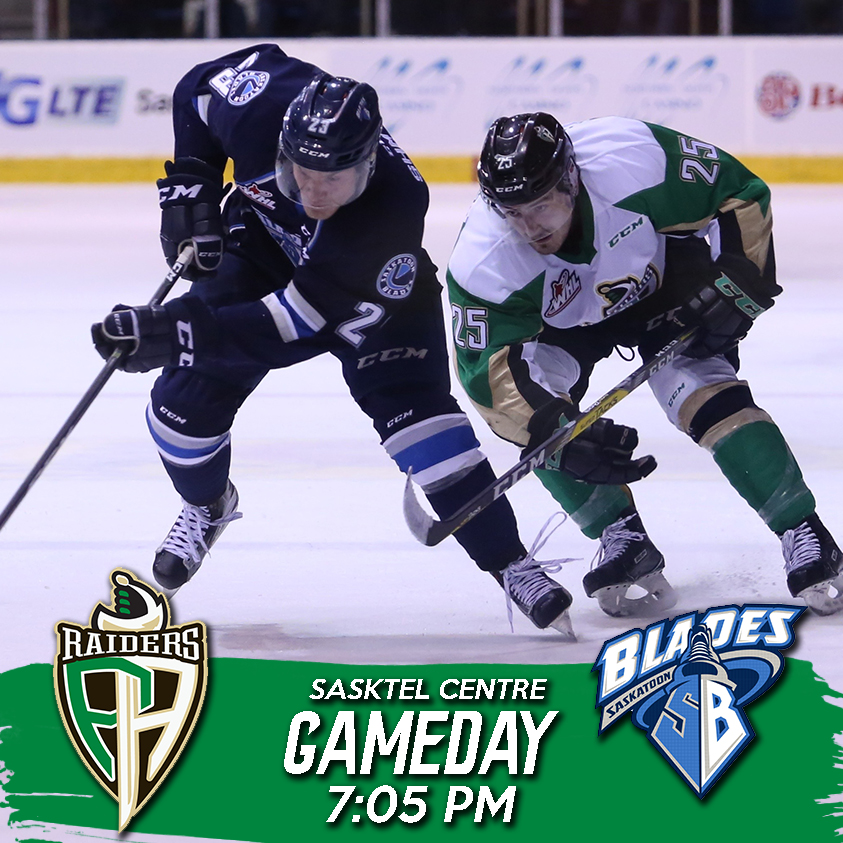 RAIDER REVIEW: The Prince Albert Raiders (8-26-1-1) return close out a home-and-home series with the Saskatoon Blades (13-20-3-1) tonight at the SaskTel Centre in Saskatoon. Last night in the first leg, the Raiders skated to a 5-3 win over the Blades at the Art Hauser Centre. The Raiders jumped out to a 3-0 lead in the first period on the strength of goals from Cody Paivarinta, Luke Coleman and Cole Fonstad. Before the end of the frame, Logan Christensen cut into the lead to make it 3-1 after 20 minutes. In the second, Drew Warkentine and Braylon Shmyr exchanged goals to give the Raiders a 4-1 advantage heading into the third. In that final period, Cavin Leth and Shmyr each scored to make it a 5-3 final. Ian Scott was strong in net for the Raiders, making 38 saves to pick up the win.

VS. SASKATOON: This is the fourth meeting of the season between the Raiders and the Blades and the second at SaskTel Centre. The Blades won the first contest between the teams in Saskatoon in October.

ALWAYS A FIRST: Two Raiders notched career milestones on Tuesday night in Prince Albert. Cody Paivarinta scored the first goal of his WHL career in the first period. The Abbotsford, BC product now has one goal and four assists in 50 career WHL games. The other milestone came from Rhett Rhinehart, who made his WHL debut against the Blades. The Raiders’ first-round pick in the 2016 WHL Bantam Draft didn’t make an impact on the scoresheet, but laid a nice hit on Caleb Fantillo in the first period.

AT THE WORLDS: Simon Stransky, Vojtech Budik and the Czech Republic suffered their first setback of the 2017 IIHF World Junior Hockey Championship on Tuesday, falling 4-3 to Switzerland in overtime. The Czech Republic is off until Thursday when they face off against Denmark.

MONKEY OFF HIS BACK: Luke Coleman found his way back into the goal column on Tuesday night, notching his sixth goal of the season. It was the Red Deer, AB product’s first goal since Nov. 2 against the Seattle Thunderbirds.

NEXT UP: The Raiders welcome the East Division-leading Regina Pats into the Art Hauser Centre for just the second time this season. Puck drop is scheduled for 7 p.m. Tickets can be purchased at raiderhockey.com, in the Raider Office, or by calling 306-764-5348.