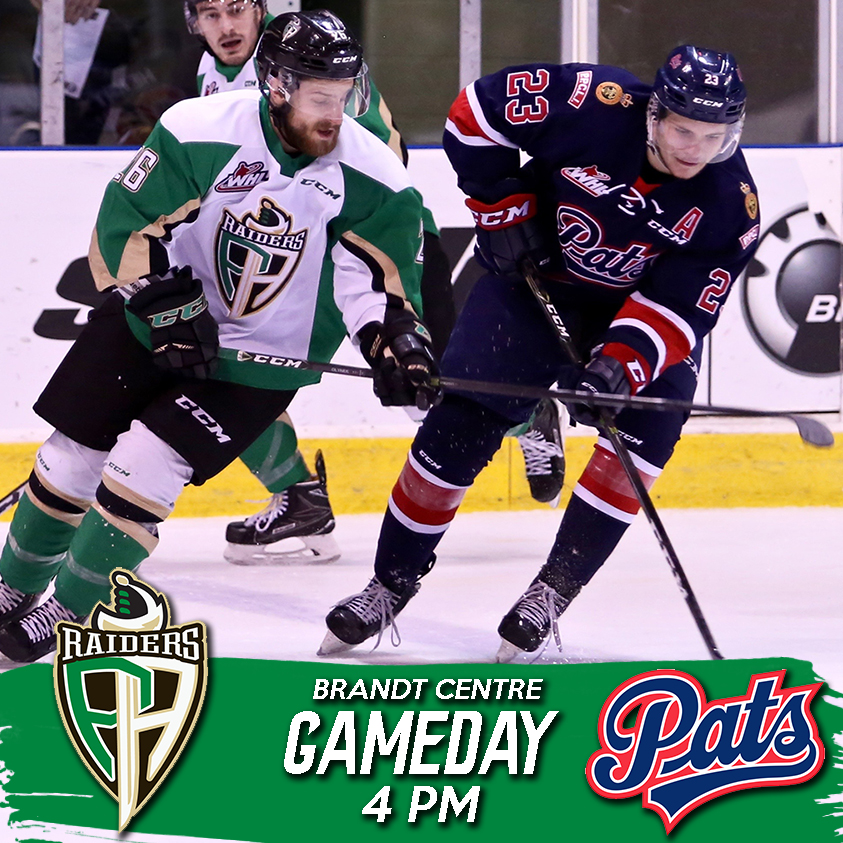 RAIDER REVIEW: The Prince Albert Raiders (8-28-1-1) open 2017 with a Sunday afternoon tilt with the Regina Pats at the Brandt Centre, closing out the home-and-home series between the two teams. In the first leg of the series, the Raiders were shut out 8-0 by the Pats on Friday night at the Art Hauser Centre. Liam Schioler and Austin Wagner gave the Pats a 2-0 lead by the end of the first period. In the middle frame, Nick Henry scored twice, while Lane Zablocki and Sam Steel found the back of the net to increase the Pats’ lead to 6-0. In the third, Zablocki tallied his second of the game and Rykr Cole scored to round out the scoring at 8-0. Ian Scott started the game, making 10 saves before being pulled early in the second period. Nicholas Sanders played the remainder of the game, stopping 14 saves on 19 attempts.

VS. REGINA: This is the fifth meeting of the season between the Raiders and the Pats and the third in Regina. The teams have split the games in Regina, with the Raiders claiming an overtime victory on the opening night of the 2016-17 regular season.

AT THE WORLDS: Simon Stransky, Vojtech Budik and Team Czech Republic wrapped up the round robin at the 2017 IIHF World Junior Hockey Championships on Saturday afternoon with a 5-2 loss to Sweden. The Czech Republic squad finished in third place of Group A and will take on Canada in the quarter-finals on Monday.

AT THE MAC’S: The Mac’s Midget AAA World Invitational Tournament is over for all five Prince Albert Raiders prospects in attendance. Tyler Lowe (1g-3a) and Chase Felgueiras (1a) finished the tournament as their Calgary Northstars posted a 1-3 record. Adam Herold (1a) and Eric Pearce of the Regina Pat Canadians finished in a second-place tie their pool with Quinn Olson (2a) and the Calgary Buffaloes.

NEXT UP: The Raiders return to the Art Hauser Centre for two home games next week, beginning on Tuesday when the Moose Jaw Warriors visit the Art Hauser Centre. On Friday, the Tri-City Americans come to town for the first and only time this season. Both games begin at 7 p.m. Tickets are available at raiderhockey.com, at the Raider Office or by calling 306-764-5348.