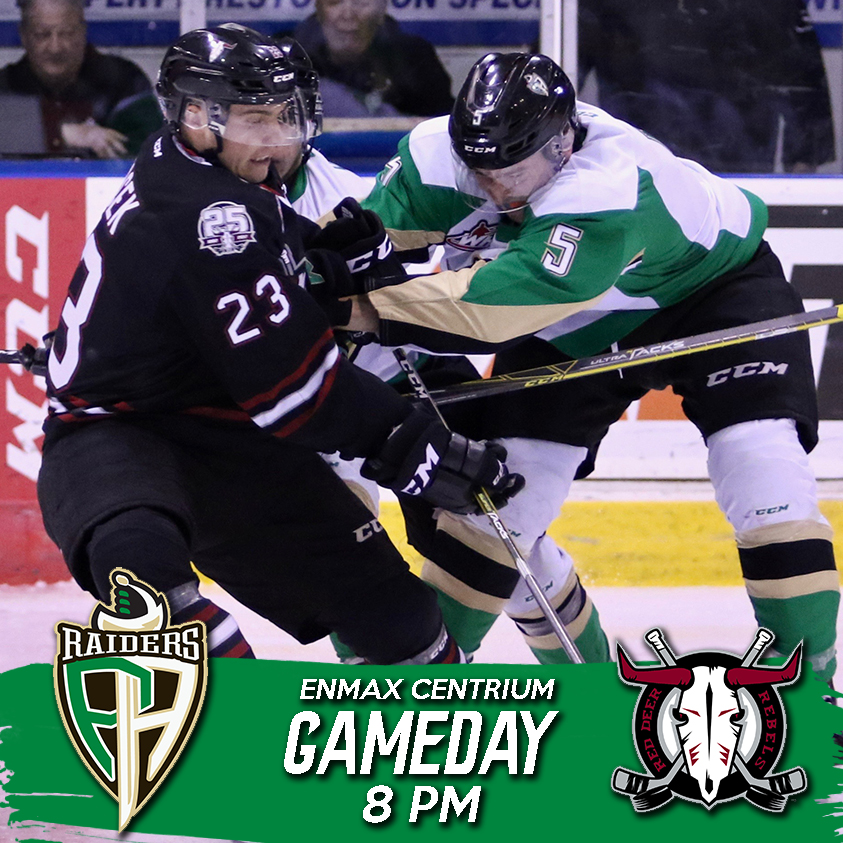 RAIDER REVIEW: The Prince Albert Raiders (8-34-3-2) start a three games in three nights Alberta swing tonight when they take on the Red Deer Rebels (20-19-4-3) at the Enmax Centrium. On Wednesday, the Raiders were dealt a 6-3 loss by the Kootenay ICE at Western Financial Place. Zack Hayes opened the scoring just 1:28 into the game to give the Raiders a 1-0 lead after 20 minutes. In the second, Adam Kadlec buried a beautiful behind-the-back pass from Kolby Johnson to put the visitors up 2-0. However, Brett Davis, Noah Philp and Max Patterson all scored by the end of the middle frame to give the ICE a 3-2 advantage heading into the third. Early in the final period, Jordy Stallard tied the game with his third as a Raider and 11th of the season. The ICE regained the lead on a Peyton Krebs – who also had three assists – goal at the 9:29 mark. Colton Kroeker added the insurance goal, while Patterson scored his second of the game into an empty net to round out the scoring. Ian Scott stopped 21 shots in the loss, his first in four career starts against the ICE.

VS. RED DEER: This is the third meeting of the season between the Raiders and the Rebels and the final game in Red Deer this season. These two teams met a week ago and the Raiders suffered a 4-3 setback. The Raiders gave up two goals in the third period with Adam Musil scoring the game-winning goal for Red Deer with 3:08 to play.

FIRSTS: After being listed by NHL Central Scouting in the morning, Zack Hayes picked up his first career WHL Goal in the evening during the Raiders’ game against the Kootenay ICE. His slapshot from the point beat Payton Lee early in the first. Also, Kolby Johnson notched his first point with the Raiders when he assisted on Adam Kadlec’s second period goal. Johnson was acquired by the Raiders on November 18 from the Prince George Cougars.

HELPING HAND: 17-year-old Max Martin is helping out the offence from the blueline. The Winnipeg, MB product has four assists in the last four games, including two on Wednesday night against Kootenay. Martin has two goals and nine assists since coming to the Raiders on November 18 in the Brendan Guhle trade.

NEXT UP: The Raiders continue their road trip on Saturday night when they venture into Rogers Place for the second time this season to take on the Edmonton Oil Kings. Puck drop is 8 p.m. CST. The next Raiders’ home game is on Friday, Jan. 27 against the Lethbridge Hurricanes on Canada 150 Night. The Raiders will be wearing special jerseys that evening celebrating the three Prime Ministers with ties to Prince Albert. The jerseys are available through online silent auction. For more information on the auction, click here. Tickets can be purchased here, in the Raider Office, or by calling 306-764-5348.