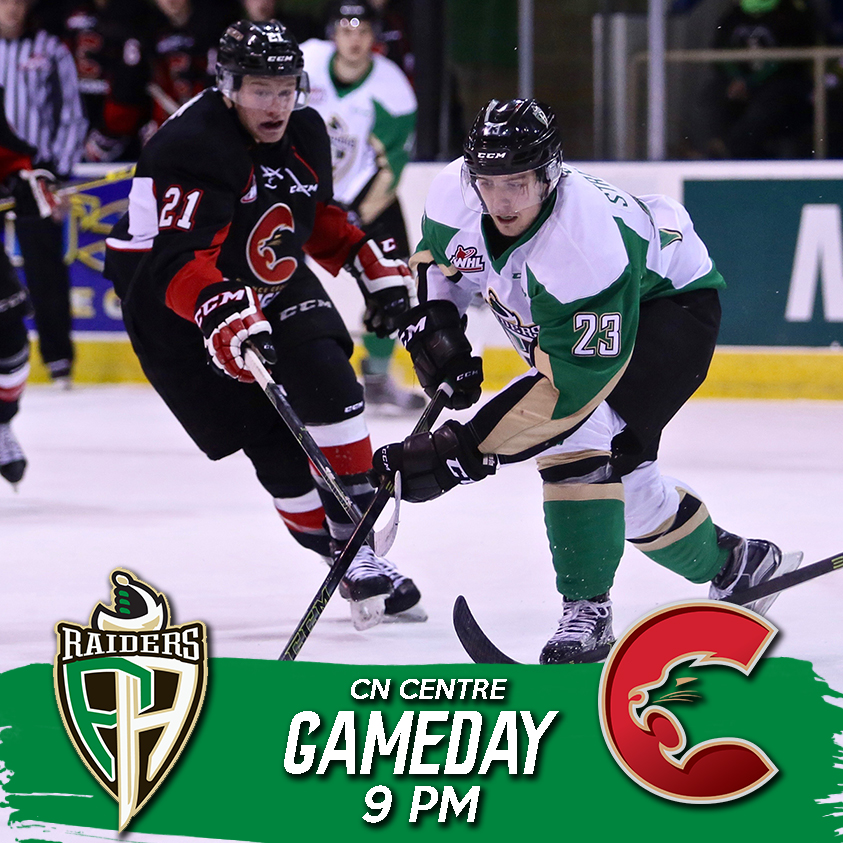 RAIDER REVIEW: The Prince Albert Raiders (5-15-1-0) conclude their B.C. road trip with a stop at the CN Centre to take on the Prince George Cougars (16-4-2-0) tonight. The Raiders are still searching for their first win of the trip after a late comeback came up short in a 5-3 loss against the Vancouver Giants on Wednesday night in Langley. The Giants jumped out to a 4-0 lead by the 2:07 mark of the second period. Near the end of the frame, Cole Fonstad scored to make it a 4-1 game. After Radovan Bondra found the back of the net in the third to complete his hat trick for the Giants, Cavin Leth and Sean Montgomery scored to cut the Giants’ lead to two, but they couldn’t get any closer. Ian Scott took the loss in goal after being pulled early in the second period.

VS. PRINCE GEORGE: Tonight marks the only meeting of the year between the Raiders and the Cougars. Last season, the Raiders knocked off the Cougars 3-1 at the Art Hauser Centre on February 3. Tim Vanstone, Reid Gardiner and Jordan Tkatch all scored for the Raiders in the victory.

MAKING THE LIST: Three Raiders were featured in the November edition of NHL Central Scouting’s Players To Watch List. Ian Scott improved on his previous ranking, earning an “A” grade, which equals a first-round pick. Simon Stransky was once again given a “C” ranking, which equates to a fourth-to-sixth-round pick. The newcomer to the list is rookie defenceman Zack Hayes.

MULTIPLE MAN: In Wednesday’s loss to the Giants, Cole Fonstad registered the first multi-point night of his WHL career with a goal and an assist. The fifth-overall pick of the 2015 WHL Bantam Draft has three goals and an assist in 19 games played and is the Raiders’ leading rookie scorer.

NEXT UP: The Raiders return home to the Art Hauser Centre on Wednesday, November 23 when they host the Swift Current Broncos, followed by Saskatchewan Rush Night on Friday, November 25’s home game against the Medicine Hat Tigers. Both home contests begin at 7 p.m. Tickets can be purchased at the Raider Office, by calling 306-764-5348 or by clicking here.