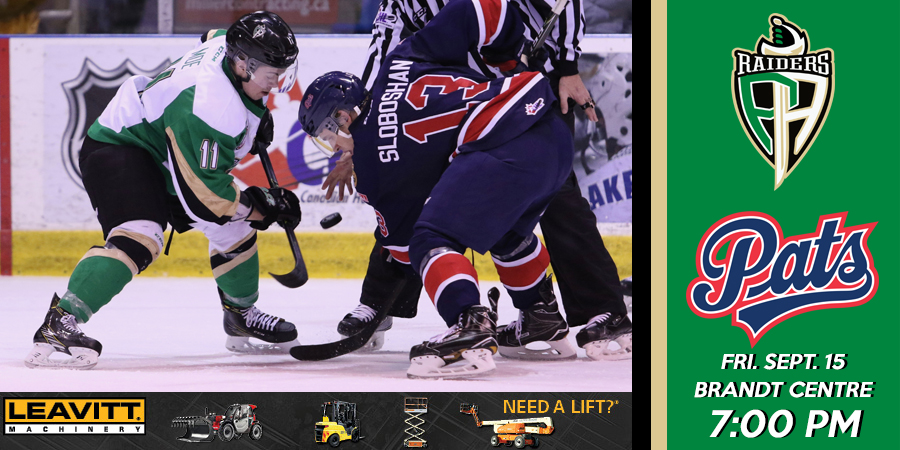 RAIDER REVIEW: The Raiders split their home-and-home series with the Saskatoon Blades following a 5-2 loss on Saturday night in Warman. Sean Montgomery had both goals for the Raiders, continuing his impressive start to the season. Curtis Miske had two assists, while D-Jay Jerome and Kaiden Guhle each added a helper. Brett Balas stopped 38 shots in his first WHL Pre-season start.

SEAN’S SNIPING: Speaking of Sean Montgomery, the Raider veteran has four goals this pre-season following Saturday night’s performance. He’s now tied for the team lead in pre-season points with D-Jay Jerome. Both players have four points in the exhibition contests.

ROSTER NEWS: Following Saturday’s game against the Blades, the Raiders re-assigned defenceman Kaiden Guhle and goaltender Josh Breznik. Guhle, the first overall pick in the 2017 WHL Bantam Draft, had an assist in two pre-season contests. He also scored in the Annual Green And White Game. Breznik was a camp invitee and did not draw into any pre-season game.

NEXT UP: The Raiders finish off the pre-season on Saturday night in Prince Albert against the Regina Pats at the Art Hauser Centre. Puck drop is 7 p.m. Tickets are $10 for adults and $5 for children.