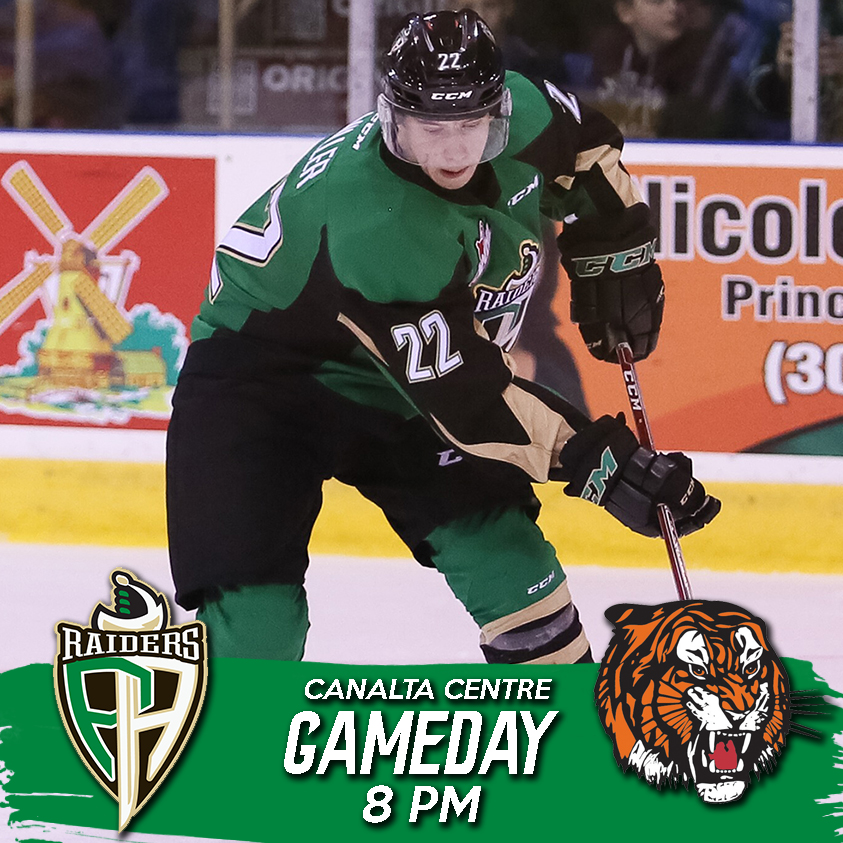 RAIDER REVIEW: The Prince Albert Raiders (5-18-1-0) look to get some revenge against the Medicine Hat Tigers (20-5-1-0) tonight at the Canalta Centre in the second half of a home-and-home series. The Raiders were bested by the Tigers 7-1 in the first half of the series on Friday night at the Art Hauser Centre on Saskatchewan Rush Night. The Tigers opened up a 3-0 lead four minutes into the second period with goals from Matt Bradley, Mark Rassell and Steven Owre. Cole Fonstad got the Raiders on the board 30 seconds later, finding the back of the net on a breakaway.  The Tigers continued to score, however, as Gary Haden, Zach Fischer, Max Gerlach and James Hamblin rounded out the scoring for the visitors. Nicholas Sanders made the start for the Raiders, stopping 12 shots in 35 minutes of action.

VS. MEDICINE HAT: This is the second of four meetings between the Raiders and the Tigers this season. Medicine Hat leads the season series with a 1-0-0-0 record. In recent years, the Raiders have struggled in Medicine Hat. Over the last five years, Raiders have two wins in six attempts.

HEATING UP:  Raiders rookie forward Cole Fonstad is starting to put points on the board. The fifth overall pick in the 2015 WHL Bantam Draft has points in three of his last four games, including the Raiders’ lone goal on Friday night against the Tigers. Fonstad has two goals and two assists in that span to raise his season total to six points on the season.

OUT OF THE BOX: The Raiders have been one of the most disciplined teams on the ice in terms of the penalty box this season. Heading into Tuesday night’s game, the Raiders have totalled just 290 penalty minutes in 24 games – the third lowest total in the league.

ROSTER NEWS: The Raiders re-assigned 1997-born defenceman Cameron Reagan to the AJHL’s Calgary Canucks on Monday. In 18 games with the Raiders, Reagan had three assists, eight penalty minutes and a minus-six rating. He was acquired by the Raiders in September.

NEXT UP: The Raiders finish their short two-game road trip on Wednesday night when they head to Lethbridge to take on the Hurricanes at the Enmax Centre. Game time is 8 p.m. CST. The next Raiders’ home game is on Friday when they host the Moose Jaw Warriors. Puck drop is 7 p.m. Tickets can be purchased at raiderhockey.com, in the Raider Office, or by calling 306-764-5348.