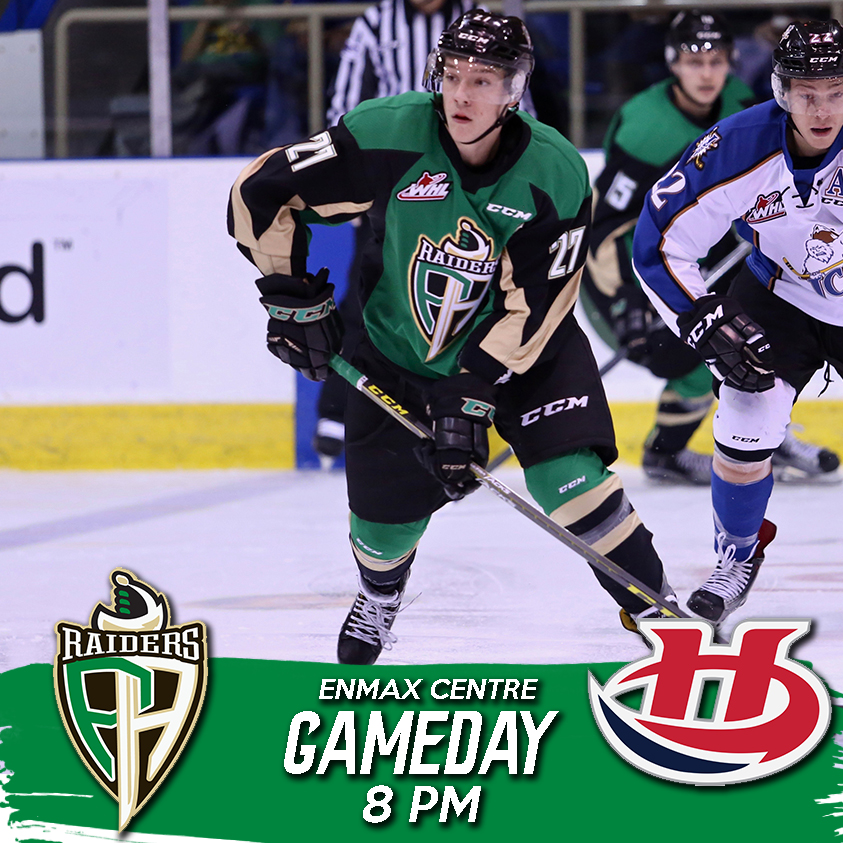 RAIDER REVIEW: The Prince Albert Raiders (13-37-3-2) continue their road trip tonight when they travel to the Enmax Centre to take on the Lethbridge Hurricanes (32-15-4-3). The Raiders opened their road trip on Wednesday night with a 3-2 loss against Medicine Hat, snapping a four-game road winning streak. Captain Tim Vanstone opened the scoring at the 7:06 mark of the first, pacing the Raiders to a 1-0 lead after 20 minutes. In the second, Mason Shaw and Jordan Henderson each solved Ian Scott to give the Tigers a 2-1 advantage heading into the final period. Less than five minutes into the third, Zach Fischer scored to increase the Tigers’ lead to two. That score held until there was 2:26 left in the game. D-Jay Jerome buried a nice pass from Vojtech Budik to bring the Raiders back within one, but it was as close as they got. Scott had a strong performance for the Raiders in the loss with 36 saves.

VS. LETHBRIDGE: This is the third meeting of the year between the Raiders and the Hurricanes and the last game this year at the Enmax Centre. In the last meeting between these two teams, the Hurricanes held off a Raiders’ comeback en route to a 5-4 victory at the Art Hauser Centre on January 27. Cavin Leth had a pair of goals to lead the Raiders’ offensive attack.

D-JAY’S FIRST: D-Jay Jerome netted his first goal as a member of the Raiders on Wednesday night, finishing off a pass at the side of the net from Vojtech Budik. The 16-year-old from Lethbridge now has a goal and four assists in 16 games since being acquired from the Raiders as part of the Austin Glover trade on December 28.

OFFENSIVE LETDOWN: Wednesday night’s loss to the Tigers was a rare off night for the offence since the WHL Trade Deadline. It was the first time since January 15 – a span of eight games – that the Raiders failed to score three or more goals. Since the deadline, the Raiders are averaging 3.5 goals per game.

NEXT UP: The Raiders end their road trip tomorrow night in Cranbrook when they face off against the Kootenay ICE. Game time is 8 p.m. The Raiders return home on Wednesday, February 15 when they host the Brandon Wheat Kings. Puck drop is 7 p.m. Tickets can be purchased here, in the Raider Office, or by calling 306-764-5348.