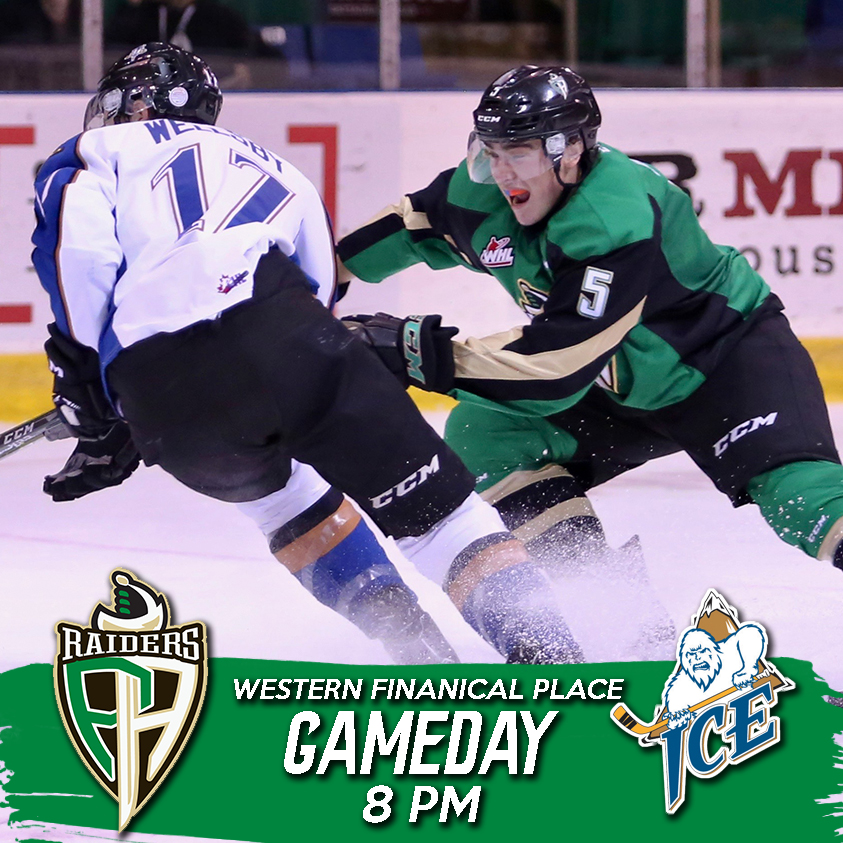 RAIDER REVIEW: The Prince Albert Raiders (13-38-3-2) close out their three-game road trip tonight in Cranbrook when they face off against the Kootenay ICE (12-34-7-1) at Western Financial Place. Last night, the Raiders were downed 4-2 by the Lethbridge Hurricanes at the Enmax Centre. The Hurricanes opened the scoring at the 5:30 mark when Alex Baer beat Ian Scott to make it a 1-0 game. In the second, Tim Vanstone scored a shorthanded goal to tie the game. The ‘Canes responded with two goals in the third period from former ICE overagers Matt Alfaro and Zak Zborosky, making it a 3-1 game. Curtis Miske found the back of the net with Scott pulled for the extra attacker, but Baer buried his second goal of the game soon after into the empty net to round out the scoring. Scott finished the game with 30 saves in the loss. Skinner made 37 saves to pick up the win.

VS. KOOTENAY: This is the third meeting of the year between the Raiders and the ICE and the last game this year in Cranbrook. The Raiders dropped the last meeting against the ICE 6-3 at Western Financial Place on January 18, tying the season series at one win apiece. Zack Hayes, Adam Kadlec and Jordy Stallard all scored for the Raiders, but 15-year-old Peyton Krebs stole the show with a goal and three assists for Kootenay.

INJURY REPORT: The Raiders lost two more players to injury on Friday. Drew Warkentine is out indefinitely after suffering a lower-body injury in Wednesday night’s loss to the Medicine Hat Tigers. Carson Miller underwent successful shoulder surgery on Friday and will be out for the remainder of the season.

MIGHTY MISKE: Curtis Miske seems to be fitting in fine with the Raiders. With a goal on Friday night, the 19-year-old from Beaumont, AB has seven goals and 14 points since being acquired by Prince Albert late in December. Miske has now matched his point total from his time in Spokane in 11 fewer games. Between the Chiefs and the Raiders this season, Miske has 12 goals and 16 assists in 45 games played.

NEXT UP: The Raiders return home on Wednesday night when they host the Brandon Wheat Kings, beginning a stretch of three of the next four games at home. Puck drop is 7 p.m. Tickets can be purchased here, in the Raider Office, or by calling 306-764-5348.