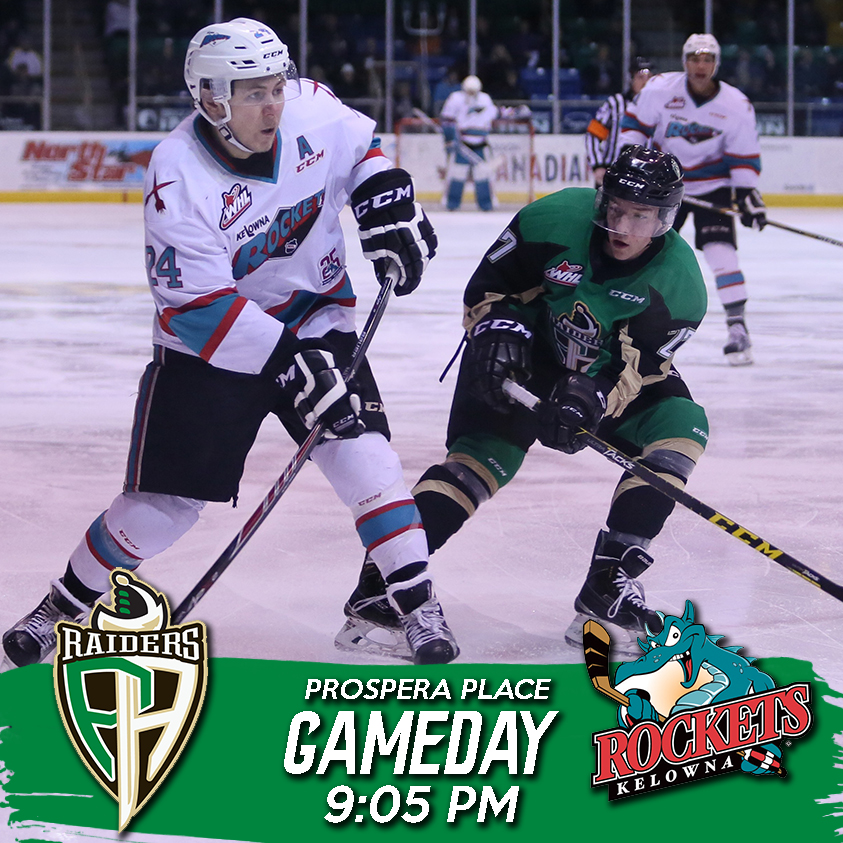 RAIDER REVIEW: The Prince Albert Raiders (5-12-1-0) continue their B.C. road trip tonight in Kelowna when they take on the Rockets at Prospera Place. Last night, the Raiders opened their trip through the B.C. Division with a 5-2 loss to the Kamloops Blazers at the Sandman Centre. Brendan Guhle opened the scoring for the Raiders on a beautiful end-to-end rush, but the Blazers responded with four consecutive goals to take a 4-1 lead midway through the second. Austin Glover brought the Raiders back within two later in the period, but the Blazers added another goal in the third to round out the scoring. Ian Scott started for the Raiders, making 15 saves before being pulled following the Blazers’ fourth goal. Nicholas Sanders took over between the pipes and made 16 saves in relief.

VS. KELOWNA: The Raiders and the Rockets face off tonight for the only time this season. Last year, the Raiders downed the Rockets 3-1 at the Art Hauser Centre on December 18. Ian Scott made 31 saves for the victory, while three different Raiders found the back of the net. Lucas Johansen scored Kelowna’s only goal of the game. In the last meeting between the two teams in Kelowna, Dillon Dube scored the game’s lone goal in a 1-0 Rockets victory on December 6, 2014.

RECENT HISTORY: In the last five years between the teams, the Rockets hold a slight edge over the Raiders with three wins in five games. The Raiders are searching for their first win in Kelowna since January 31, 2007 when they knocked off the Rockets 4-1.

PENALTY SHOT SPECIALIST: Nicholas Sanders faced his second penalty shot of the season on Friday night in Kamloops, denying Rudolfs Balcers’ attempt. Sanders has been in net for both of the penalty shots against the Raiders this season. He stopped the other penalty shot attempt by Jayden Halbgewachs of the Moose Jaw Warriors on November 1.

TRADING PARTNERS: Two years ago, the Raiders and the Rockets pulled off two trades that sent Josh Morrissey and Leon Draisaitl to Kelowna. While those two players have started their NHL careers, the Raiders have pieces from those trades on their roster for this meeting. Austin Glover was acquired in the Morrissey deal, along with a couple of picks. The Raiders picked up a 2015 WHL Bantam Draft first-round pick in the Leon Draisaitl trade, which turned into rookie forward Carson Miller. Prospects Eric Pearce and Brett Balas were also selected by the Raiders due to WHL Bantam Draft picks as a result of the trade.

NEXT UP: The Raiders venture to Victoria to take on the Royals at the Save-On-Foods Memorial Arena. Puck drop is 9:05 p.m. CST. The Raiders return home to the Art Hauser Centre on Wednesday, November 23 when they host the Swift Current Broncos, followed by Saskatchewan Rush Night on Friday, November 25’s home game against the Medicine Hat Tigers. Both home contests begin at 7 p.m.