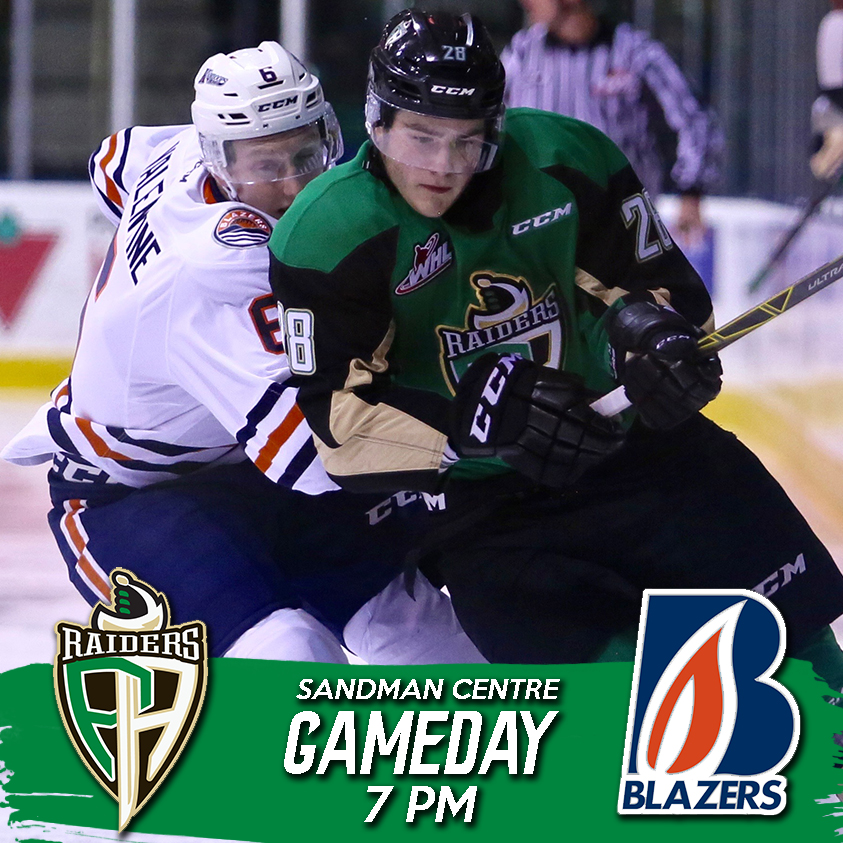 RAIDER REVIEW: The Prince Albert Raiders (5-11-1-0) start their biennial road trip through the B.C. Division tonight in Kamloops against the Blazers (10-9-1-0) at the Sandman Centre. The Raiders are trying to build some momentum following a 6-0 victory over the Kootenay ICE in their last game on November 4 at the Art Hauser Centre. Sean Montgomery led the charge on offence with two goals. Tim Vanstone chipped in a goal and an assist in the victory. Also scoring for the Raiders were Cole Fonstad, Adam Kadlec and Cavin Leth. Goaltender Ian Scott stopped all 22 shots to pick up his first shutout of the season.

VS. KAMLOOPS: This is the only meeting of the season between the Raiders and the Blazers. Last season, the Blazers knocked off the Raiders 5-2 on Teddy Bear Toss Night at the Art Hauser Centre. Deven Sideroff sparked Kamloops’ offensive attack with two goals and an assist, while Jesse Lees had a goal and an assist for the Raiders.

VS. B.C. DIVISON: Last year, the B.C. Division made their trip through the Art Hauser Centre. The Raiders finished with a 3-1-1-0 mark against the Western clubs, earning wins over the Vancouver Giants, Kelowna Rockets and Prince George Cougars. In their last road trip through British Columbia, the Raiders came back with a 2-3-0-0 record with wins over the Blazers and the Cougars.

REPPING THE DUB: Raiders defenceman Brendan Guhle returned to the team following his stint with Team WHL at the 2016 CIBC Canada Russia Series earlier this week.  Guhle dressed in both games as the WHL split their two games against the Russians, dropping a 3-2 overtime game on Monday and winning 4-1 on Tuesday. The Sabres draft pick finished the games with two shots and a minus-one rating.

GETTING SOME POWER: The Raiders scored twice on the power play in their last game against the Kootenay ICE, with Tim Vanstone and Sean Montgomery finding the back of the net with the man advantage. It was just the second time this season the Raiders have scored multiple power-play goals in a game. The last time came on October 28 in a 4-2 loss to the Spokane Chiefs.

NEXT UP: The Raiders continue their trip through B.C. in Kelowna against the Rockets. Puck drop is 9:05 p.m. CST. The Raiders return home to the Art Hauser Centre on Wednesday, November 23 when they host the Swift Current Broncos, followed by Saskatchewan Rush Night on Friday, November 25’s home game against the Medicine Hat Tigers. Both home contests begin at 7 p.m.