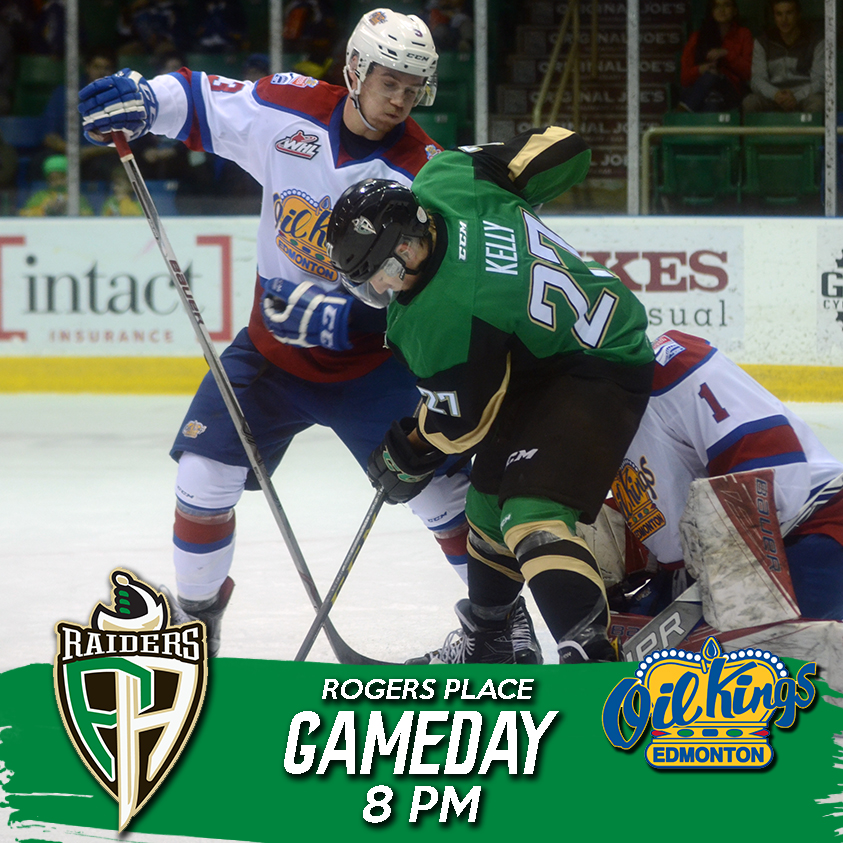 RAIDER REVIEW: The Prince Albert Raiders (9-34-3-2) are in Rogers Place tonight to take on the Edmonton Oil Kings (18-23-3-1) as they continue their weekend jaunt through Alberta. Last night, the Raiders picked up their first win since Dec. 27 by knocking off the Red Deer Rebels 3-2 at the Enmax Centrium. Jordy Stallard opened the scoring five minutes into the first period with his fourth since joining the Raiders. In the second, Michael Spacek and Evan Polei scored for the Rebels to give the home team a 2-1 lead. Parker Kelly tied the game late in the second when he buried a rebound from the side of the goal. In the third, the Raiders took the lead on a late power play. Brayden Pachal snapped a shot through Lasse Petersen for his first goal of the season to put the Raiders up 3-2. Nicholas Sanders held the fort for the final five minutes of the game, including a point-blank save on former Raider Austin Glover with less than 30 seconds left. Sanders finished the game with 40 saves for the win.

VS. EDMONTON: This is the fourth and final game of the year between the Raiders and the Oil Kings. The Raiders have won two of the three meetings between the teams, including a 4-3 overtime victory in the last game. The only loss against the Oil Kings came in Edmonton in October.

MORE FIRSTS: The firsts keep coming for the Raiders. On Friday, Nicholas Sanders earned his first win with the team with a 40-save performance against the Rebels. In that same game, Brayden Pachal picked up his first goal as a Raider, which was also his first of the season and first career game-winning goal.

SEEING THE PUCK: Nicholas Sanders was busy for the Raiders on Friday night against the Rebels. It’s been a trend for the Calgary-born netminder in 2017. Since the New Year, Sanders has faced more than 35 shots in all four of his starts.

UPPING THE OFFENCE: 17-year-old Parker Kelly has found his offensive touch following the WHL Trade Deadline. In the six games following the deadline, the Camrose, AB product has three goals and three assists in six games. With a goal and an assist on Friday, Kelly tied his goal total from last season with eight and surpassed last year’s assist total with his 12th helper of the year.

NEXT UP: The Raiders finish off their road trip on Sunday afternoon when they close out the season series against the Calgary Hitmen at the Scotiabank Saddledome. Puck drop is 5 p.m. CST. The next Raiders’ home game is on Friday, Jan. 27 against the Lethbridge Hurricanes on Canada 150 Night. The Raiders will be wearing special jerseys that evening celebrating the three Prime Ministers with ties to Prince Albert. Tickets can be purchased at raiderhockey.com, in the Raider Office, or by calling 306-764-5348.