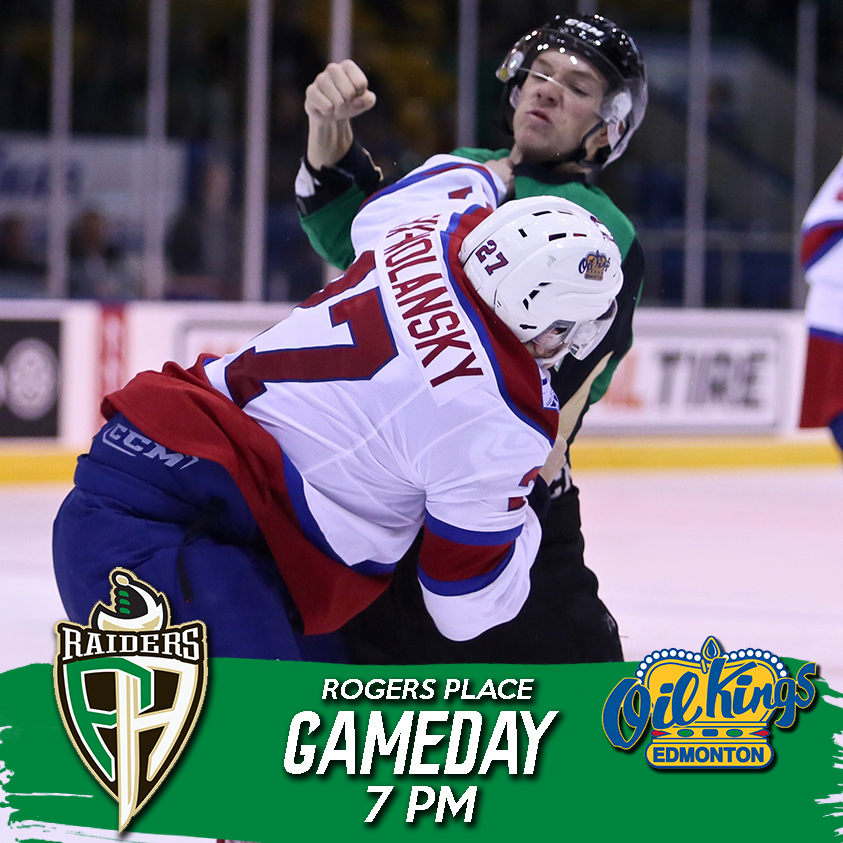 RAIDER REVIEW: The Prince Albert Raiders (3-5-1-0) begin their Alberta road trip tonight when they visit the Edmonton Oil Kings (3-5-2-0) at Rogers Place. In their last game, the Raiders fell 4-3 in overtime to the Brandon Wheat Kings. Simon Stransky increased his team lead in points to 15 with two goals, while Nic Holowko found the back of the net for the second time in as many games in the loss.

VS. EDMONTON: This is the second meeting of the season between the Raiders and the Oil Kings. In the previous meeting, the Raiders knocked off the Oil Kings 5-2 at the Art Hauser Centre on a Sunday afternoon. Sean Montgomery scored twice, while Parker Kelly and Tim Vanstone each picked up a goal and an assist.

NEW DIGS: Tonight is the Raiders’ first game at the recently opened Rogers Place. In the last five years, the Raiders had some success at the old Rexall Place. In that span, the Raiders beat the Oil Kings six of the 10 times they visited the City of Champions.

SERIES SELECTION: Raiders defenceman Brendan Guhle was named to Team WHL’s roster for the 2016 CIBC Canada Russia Series on Thursday morning. This is the second consecutive season Guhle has represented the league in the Canada Russia series. During last year’s event, Guhle played in both games and finished with a plus-one rating.

STRIKING SHORTHANDED: Saturday night’s game saw the Raiders score a shorthanded goal for the first time this season when Simon Stransky beat Jordan Papirny in the second period. It was the team’s first shorthanded goal since Brendan Guhle’s on Dec. 27, 2015 against the Saskatoon Blades.

KEEP ON DEALIN’: The Raiders completed another early-season trade on Tuesday. They acquired ’99-born centre Adam Kadlec from the Prince George Cougars in exchange for ’99-born winger Josh Maser and a sixth-round pick in the 2017 WHL Bantam Draft. It was the Raiders’ eighth trade since the beginning of September. They made seven total trades during the 2015-16 season.

NEXT UP: The Raiders continue their weekend road trip on Saturday night in Red Deer when they take on the Rebels at the Enmax Centrium. Game time is 7 p.m. The trip concludes on Sunday when they visit Calgary to take on the Hitmen in a 4 p.m. matinee. The next Raiders’ home game is on Friday, October 28 against the Spokane Chiefs. Puck drop is 7 p.m. For tickets, click here or call 306-764-5348.