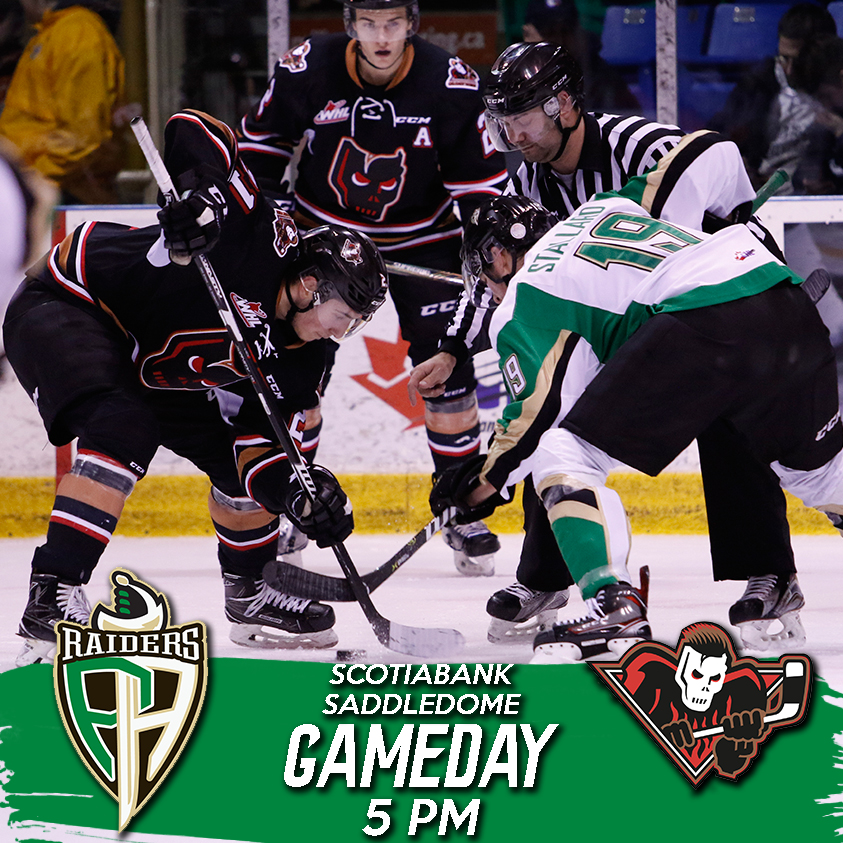 RAIDER REVIEW: The Prince Albert Raiders (10-34-3-2) finish off their four-game road trip this evening when they visit the Scotiabank Saddledome to take on the Calgary Hitmen (17-21-5-2). The Raiders enter Sunday’s contest riding a two-game winning streak after knocking off the Edmonton Oil Kings 5-2 on Saturday night at Rogers Place. Curtis Miske opened the scoring 7:30 into the first period. The Raiders exploded in the second period by scoring three goals in 90 seconds. Jordy Stallard made it a 2-0 game at the 8:51 mark of the middle period. 15 seconds later, Cavin Leth jammed home a rebound to give the Raiders a three-goal advantage. About a minute later, Cole Fonstad tallied an unassisted marker to give the Raiders a 4-0 lead after 40 minutes. In the third, the Oil Kings ended Nicholas Sanders’ shutout bid just 1:02 into the period. Sean Montgomery restored the Raiders’ four-goal lead just two minutes later. With 1:35 remaining, the Oil Kings added another goal to make it a 5-2 game. Sanders was strong in net again for the Raiders, making 29 saves to pick up his second win in as many games.

VS. CALGARY: This is the fourth and final game of the season between the Raiders and the Hitmen. The Raiders have won one of the three meetings between the teams so far this season. That win came on a Sunday afternoon in October that closed out a three-in-three scenario. The Hitmen won the last game between the clubs 11 days ago.

LINING UP: Parker Kelly, Curtis Miske and Jordy Stallard have seemingly found some chemistry together. In the last five games, the trio have combined for 15 points (8g-7a). Stallard leads the three with seven points (4g-3a) in that span. Kelly and Miske each have contributed two goals and two assists.

SATURDAY NIGHT’S ALRIGHT: Saturday night’s victory was a long time coming for the Raiders. It was the club’s first win on a Saturday night this season. Entering last night’s game, the Raiders held an 0-8-2-1 record on the sixth day of the week.

CROSSED OFF THE LIST: One career milestone is now off the list for rookie defenceman Austin Crossley. The 17-year-old from Fort St. John, BC picked up his first WHL point on Saturday night when he assisted on Cavin Leth’s second-period goal. Leth knocked in the rebound generated from Crossley’s shot.

NEXT UP: The Raiders return to the Art Hauser Centre on Friday night when they host the Lethbridge Hurricanes on Canada 150 Night. The Raiders will be wearing special jerseys that evening celebrating the three Prime Ministers with ties to Prince Albert. Tickets can be purchased here, in the Raider Office, or by calling 306-764-5348.