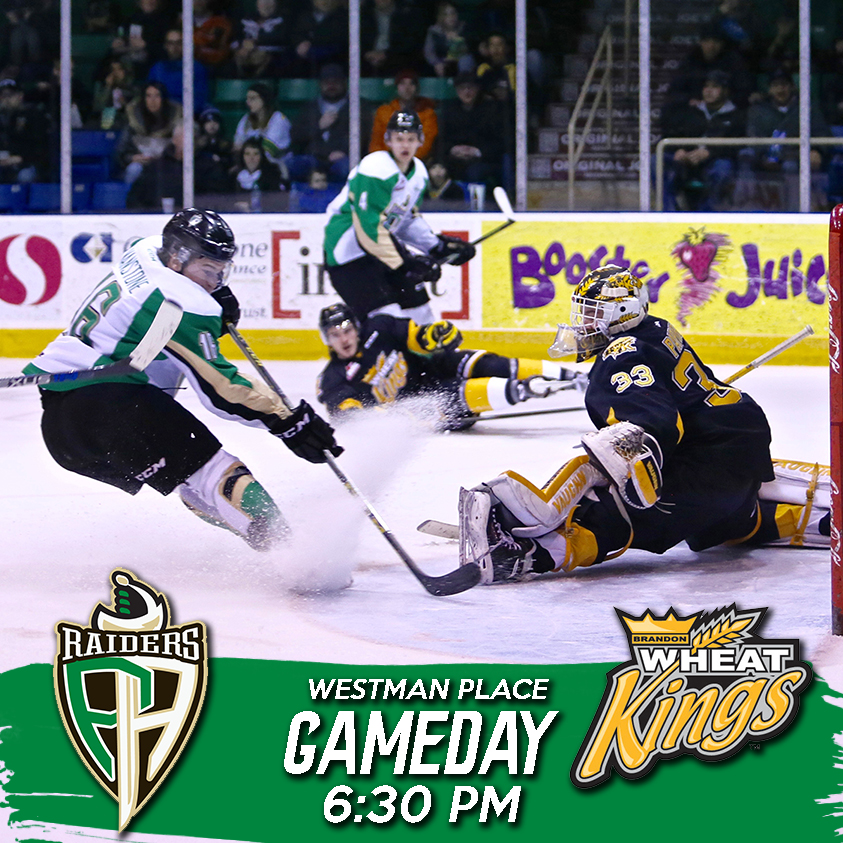 RAIDER REVIEW: The Prince Albert Raiders (2-5-0-0) head to Brandon for the first time this season for a Friday night tilt with the Wheat Kings (2-3-1-0) at Westman Place. The Raiders are coming off a 4-3 loss to the Swift Current Broncos last Saturday night. Tim Vanstone, Luke Coleman and Austin Glover all scored for the Raiders in a losing effort.

GUHLE RETURNS: The Buffalo Sabres returned defenceman Brendan Guhle to the Raiders on Tuesday afternoon. Guhle was drafted by the Sabres in the second round of the 2015 NHL Entry Draft. With Guhle returned to the team, the Raiders re-assigned forward Evgeni Astrouski and defenceman Lane Kirk to the AJHL’s Drumheller Dragons and the MJHL’s Swan Valley Stampeders, respectively.

BETWEEN THE PIPES: The Raiders and Tri-City Americans exchanged goaltenders on Thursday. Prince Albert acquired 1998-born goaltender Nicholas Sanders and a third-round pick in exchange for overage goaltender Rylan Parenteau. Sanders played in 23 games for the Americans, posting a 9-6-01 record to go along with a 2.99 goals-against average and a 0.901 save percentage.

SIGNING DAY: On Thursday, Reid Gardiner signed an AHL contract for the 2016-17 season with the Wilkes-Barre/Scranton Penguins. The ’96-born forward from Humboldt led the Raiders in goals (43), assists (49) and points (92) last season. The Penguins open the AHL season on Saturday night when they open the 2016-17 AHL Regular Season against the Hartford Wolf Pack.

NEXT UP: The Raiders complete their home-and-home series with the Wheat Kings on Saturday night at the Art Hauser Centre. Saturday is also Pink In The Rink Night at the Art Hauser Centre. There will be haircuts in the lobby courtesy of Hair Revolution. For every walk-up ticket sold, $1 will be donated to Victoria Hospital.  For tickets, click here or call 306-764-5348. When purchasing online, use the promo code PINK to save $2.