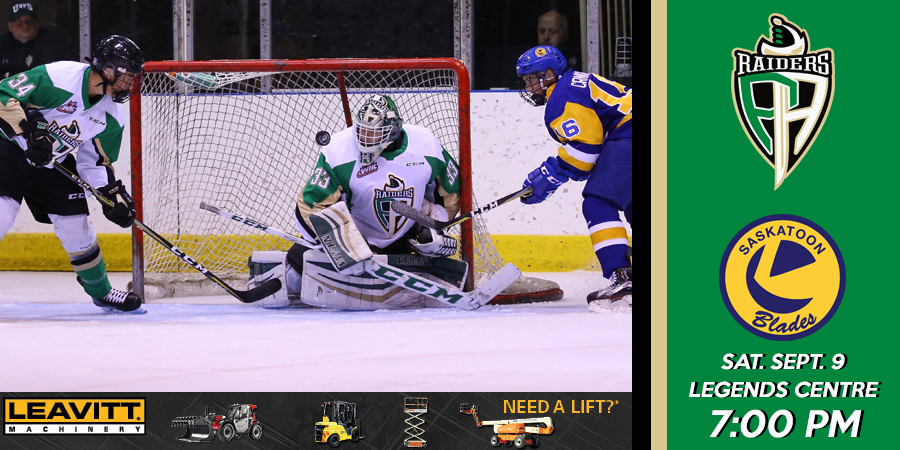 RAIDER REVIEW: The Raiders picked up their first win of the WHL Pre-season on Friday night in a 3-2 victory over the Saskatoon Blades at the Art Hauser Centre. Sean Montgomery scored two goals in the third period to lift the Raiders to the win. Curtis Meger got the start in goal, stopping 20 saves in the win.

WARMAN WELCOME: The Raiders faced off against the Blades last year in Warman. Parker Kelly had a goal and two assists to lead the Raiders to a 7-5 win.

MILLER TIME: Including pre-season contests, Carson Miller has a point in four of the last six games he has played. In that span, he has a goal – which he scored on Friday night – and three assists. Miller finished last season with seven goals and 12 assists in 46 games played.

PUTTING UP POINTS: 1999-born winger D-Jay Jerome currently leads the Raiders with three points this pre-season after registering an assist in Friday night’s win over Saskatoon. Jerome, who was acquired by the Raiders from the Red Deer Rebels last season, had five goals and three assists in 23 games played in Prince Albert.

NEXT UP: The Raiders wrap up the WHL Pre-season with a home-and-home series against the Regina Pats, beginning Friday night at the Brandt Centre. The next Raiders’ home game is on Saturday, September 16 in the rematch against the Pats at the Art Hauser Centre. Game time is 7 p.m.