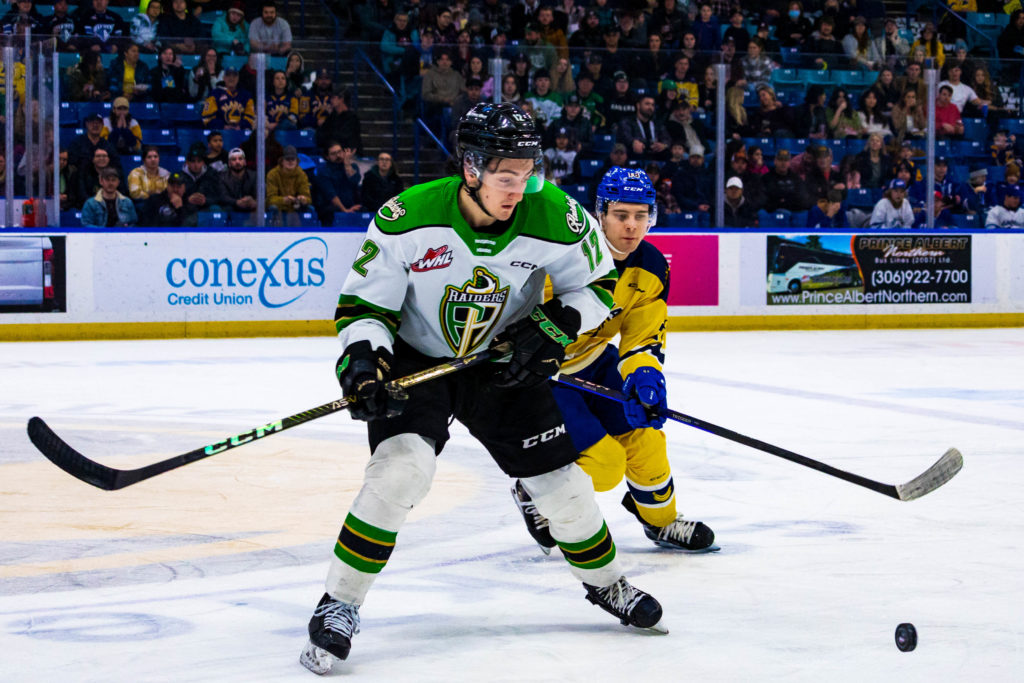 SETTING IT UP: The Raiders (15-25-3-0) wrap up the second half of a home and home set with the Blades tonight, looking to avange a 6-1 loss in Saskatoon on Friday night. It’s the last game before the green and gold head to their B.C. road trip.

HOME ICE ADVANTAGE: The Raiders will be looking to shift the tide in their season series with the Blades tonight, and they’ll hope that playing at home will be the start of that. Saskatoon has gone 5-0-0-0 against the Raiders so far this season, and with five games left against each other, the Raiders will be aiming to make up some ground tonight in front of their home fans.

BUNCH OF BANANAS: Last night’s 6-1 loss in Saskatoon had its share of high’s and low’s. The game got off to a weird start after a linesman was struck in the face, leaving the game, and the contest would be left without a full referee unit until the second period. The Blades fired in four goals in the first period to take a commanding lead into the second. Sloan Stanick got the Raiders on the board in the middle frame, but Saskatoon scored twice more to take a 6-1 lead into the third, and they would never look back, winning by a 6-1 final in their Saskatoon ‘Bananas’ jerseys.

KOZY’S BACK: Friday night marked the return of Raider defenceman Landon Kosior to the lineup. After missing games with an upper body injury, it was a welcome return to have the most tenured d-man back on the lineup sheet.

UP NEXT: The Raiders will make their farthest road trip of the season next week, as they travel to B.C.. It’s their longest road trip of the season, starting on Jan. 28 in Prince George. The club will then travel for games in Victoria, Vancouver, Kamloops, and Kelowna, before returning to Saskatchewan for one more road game in Swift Current, which will be the start of a home and home set with the Broncos. PA returns home on February 11th.