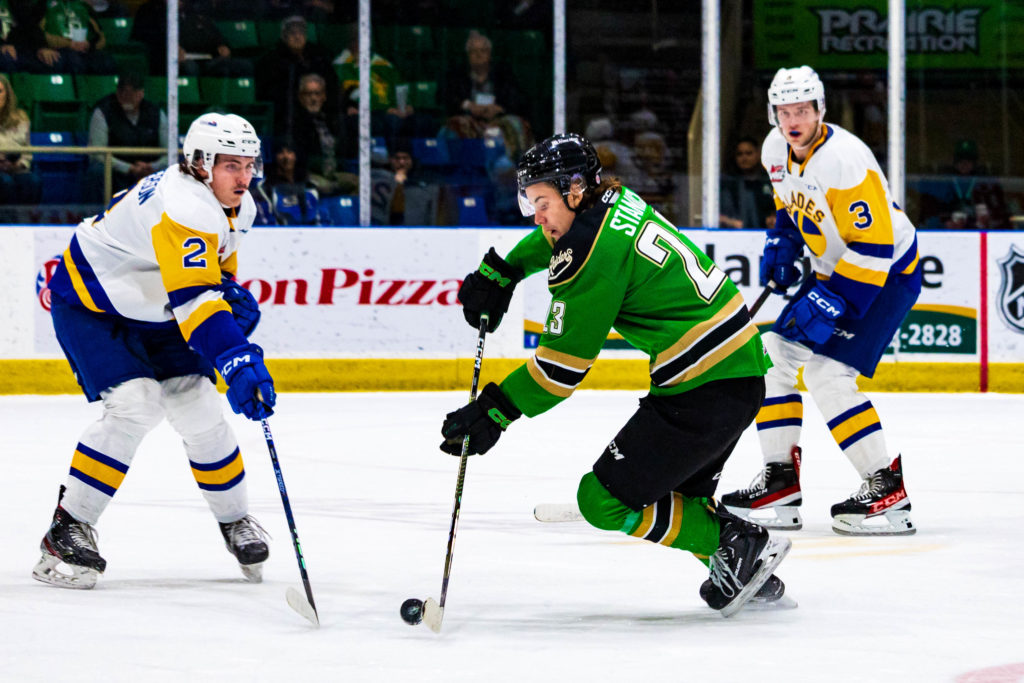 SETTING IT UP: The Raiders (15-24-3-0) head to Saskatoon tonight to kick off the first game of a home and home set between the two clubs. Prince Albert is coming off of a loss Winnipeg, while the Blades fell to the Warriors in OT. Both games were on Wednesday.

ICE COLD: The Raiders couldn’t find their groove offensively on Wednesday night in an 8-1 loss against the #1 ranked team in the CHL, the Winnipeg ICE. One goal in the second period from Hayden Pakkala was the only offense generated, while the ICE scored twice in the first period, and added three goals each in the second and third to cruise to their 31st victory of the season.

FORMER TEAMMATES IN BATTLE: In Carson Latimer’s return to the Art Hauser Centre, the forward scored a goal to help Winnipeg beat Prince Albert. On the other side, former Winnipeg ICE forward Hayden Pakkala struck against his old club. Wednesday night also marked  the return of Vladislav Shilo to the AHC for the first time since he was traded on September 29th. Once again on the other hand, it marked Raider defenceman Owen Boucher’s second game against his former squad, and Aiden Oiring’s first game against his former Winnipeg teammates.

ANOTHER TOP RANKED TEAM: In what has been the toughest stretch for the Raiders in terms of their schedule this season, they aren’t out of the woods quite yet. Saskatoon is ranked third in the Eastern Conference with a 27-9-3-1 record, and haven’t dropped a contest to the Raiders in four meetings so far this season.

UP NEXT: The Raiders and Blades will hit the highway back to Prince Albert for the second half of the home and home series on Saturday night. After that, the Raiders will head out west for their B.C. road trip for five games. When they head back to Sask, they will pay a trip to Swift Current before hitting the ice at home again on February 11th against the Broncos.