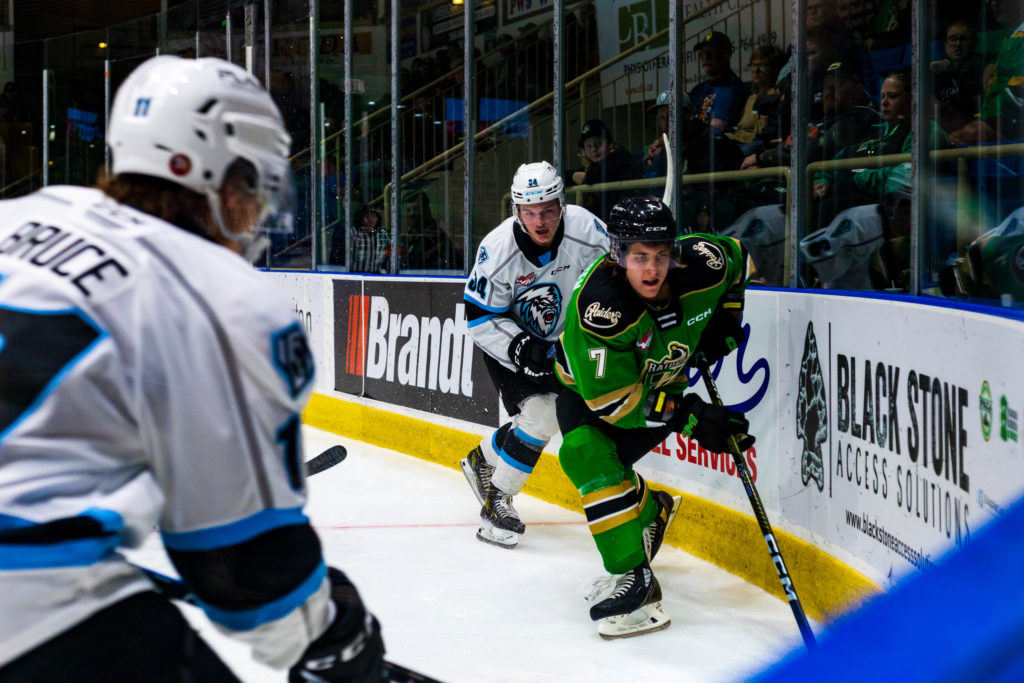 SETTING IT UP: The Raiders (10-14-2-0) play the last game of their five game road trip tonight in Winnipeg to take on the top ranked ICE. The Raiders are coming off of a 5-4 setback to the Brandon Wheat Kings on Friday night, in a game where they fought back from a 4-1 deficit, but just couldn’t find the game’s tying goal in the third period. The ICE, meanwhile, are fresh off of a 4-3 setback to the Swift Current Broncos at home ice on Friday night. Winnipeg sits atop the league standings with a 22-4-0-0 record, but have lost their last two games with a defeat to the Saskatoon Blades by a 5-2 score being their other setback on Saturday, November 26th.

BREAKING EVEN ON THE ROAD: The Raiders have gone 2-2-0-0 so far through four out of five games on the road. The trip began with a 5-2 win over the Hitmen in Calgary, followed by a 6-1 setback to the Red Deer Rebels. In their third game in three nights’ the Raiders took their second win out of Alberta, beating the Medicine Hat Tigers 4-2. Less than a week later in Brandon on Friday night, the Raiders suffered their second loss on the road swing. It was a game against the Wheat Kings where the Raiders trailed 4-1 and 5-2, but they clawed back to cut the score to 5-4, ultimately failing to find an equalizing goal late in the third period, as the club fell to four games under .500 on the season.
THE BIGGEST TEST YET: If the Raiders want to return home with a winning record on their road trip, they will have to get it done against their toughest competition yet. They head into Winnipeg to take on an ICE team looking to snap their longest losing streak of the season: two games. Winnipeg is not a team that experiences losing a lot, so expect them to come out flying in the early stages of the game.
HOME DATES: The Raiders will head back to the friendly confines of the Art Hauser Centre for the first time in 18 days next week. They will play their first home game since November 19 on Wednesday night when they welcome the Wheat Kings to town. In total, the Raiders will have a five game homestand before the holiday break, with that game against Brandon, and also games against the Regina Pats on Friday night which will be teddy bear toss night. The Raiders will also welcome the Saskatoon Blades, Medicine Hat Tigers, and Spokane Chiefs to town before the break.