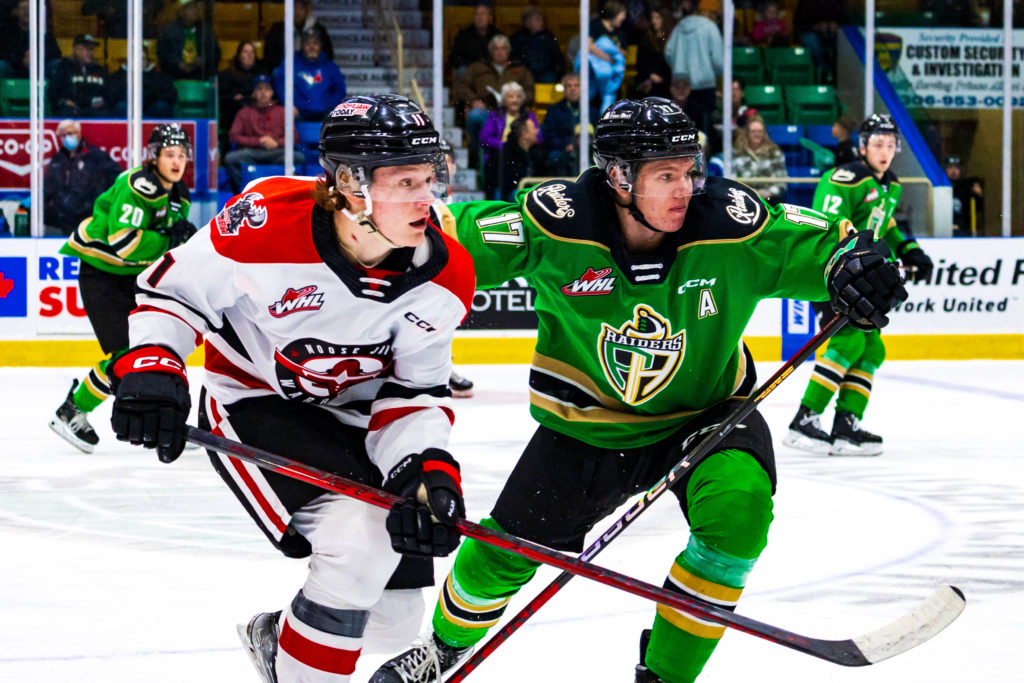 SETTING IT UP: The Raiders (6-12-2-0) head to Moose Jaw to take on the Warriors in a Tuesday night tilt. It’ll be the third meeting of the season between the two teams, who last met on November 4th at the Art Hauser Centre. Prince Albert is fresh off of a 4-2 win over the Edmonton Oil Kings on Remembrance Day Friday. The win brought the Raiders within two points of the final playoff spot in the Eastern Conference. They sit tenth overall in the standings, tied with the Medicine Hat Tigers with 14 points overall. The Warriors (11-7-0-0) are sitting in a tie for the fourth playoff spot with 22 points on the season. Moose Jaw is coming back from a home and home split with the Tigers on the weekend.

STEADY PAST SIX: The Raiders have been playing close to .500 hockey over their last seven games with a 3-4-0-0 record. Looking back so far on the start of the season, it’s the best stretch Prince Albert has had so far this year. Three of their four losses in that stretch have been one goal games (5-4 L vs Swift Current, 3-2 L vs Moose Jaw, and 2-1 L @ Lethbridge). The only exception was a 4-2 setback to the Everett Silvertips on Nov. 5.

SETTLING IN BETWEEN THE PIPES: It’s been an exceptional four game stretch for Raiders’ netminder Tikhon Chaika. The import goalie has stopped 136 of 144 shots thrown at him, good for a .944 SV% over his last four starts dating back to November 5 against Everett. While the team went just 2-2-0-0 in those games, that has been to no fault of the play of Chaika, whose SV% is now over .900 (.903).

UP NEXT: It’ll be a busy stretch on the road for the Raiders for the rest of the month. After a home game this Saturday against the Medicine Hat Tigers, the club will head on a five game road swing starting in Alberta, and ending in Manitoba. The Raiders will head to Edmonton, Red Deer, and Calgary next weekend for three games in three nights, which will be the second time the team has done that this season on an Alberta road trip. A week later, they will hit the road east for a pair of games in Brandon and Winnipeg for games on Friday, Dec. 2 and Saturday, Dec. 3. After that, they will come back home for five straight games before the Christmas break with games against Brandon, Regina, Saskatoon, Medicine Hat, and Spokane, before taking a week off for the holidays.