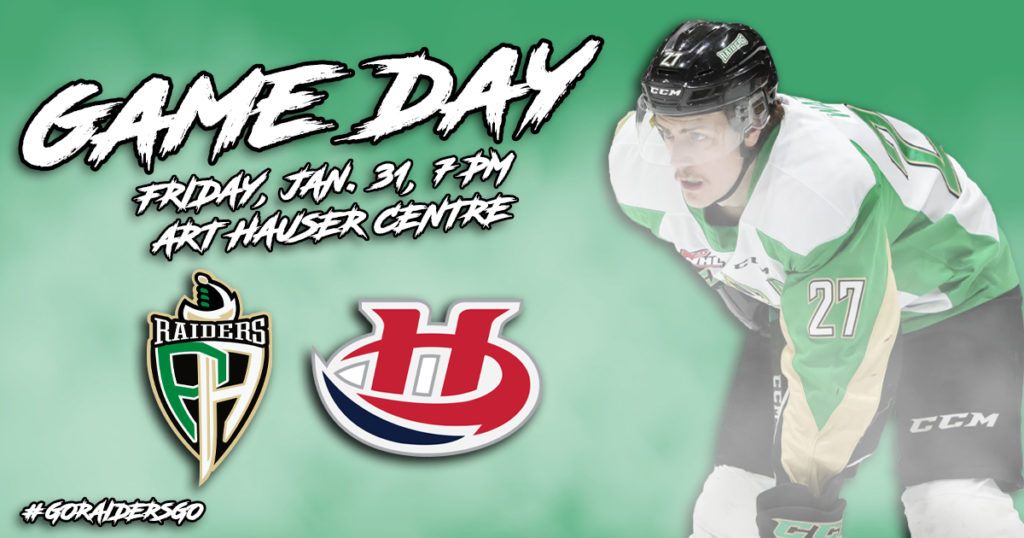 RAIDER REVIEW: The Raiders (25-14-5-4) wrap up their four-game homestand tonight against the Lethbridge Hurricanes (29-11-2-5). On Wednesday night against Victoria, the Raiders blanked the Royals 3-0. Ilya Usau and Kaiden Guhle each had a goal and an assist. Reece Vitelli buried the empty netter. Max Paddock recorded the shutout with a 17-save effort.

MR. 300: Brayden Watts is set to play in his 300th career WHL game tonight against Lethbridge. The Bakersfield, CA product was a third-round draft pick of the Moose Jaw Warriors in the 2014 WHL Bantam Draft. In his WHL career, Watts has 58 goals and 85 assists. He has compiled 19 goals and 24 assists in 45 games since joining the Raiders in September.

LOCKED IN: Max Paddock earned his first shutout as a Raider and third of the season overall on Wednesday against Victoria. He faced 17 shots on the evening, which was the lowest number in his WHL career when playing the full game. Since joining the Raiders at the WHL Trade Deadline, Paddock has a 4-0-0-2 record with a 1.44 goals-against average and a 0.946 save percentage.

SCORING IN BUNCHES: With a goal on Wednesday night, Kaiden Guhle has scored in consecutive games for the third time this season. His longest stretch is four games from Nov. 16 to 22. This year, the 2020 NHL Draft prospect has nine goals and 21 assists while playing in all 48 games.

CLOSING THE GAP: Ozzy Wiesblatt is creeping closer to the team lead in assists. He picked up a helper last night to give him 33 assists on the season, which is two behind Aliaksei Protas’ team lead. The 2020 NHL Draft prospect is five points off Protas’ pace for the team lead in scoring as well. Wiesblatt is averaging over a point per game this season with 52 in 48 contests.

NEXT UP: The Raiders open a stretch of four road games on Saturday night in Swift Current against the Broncos at the Innovation Credit Union i-Plex. The next Raiders’ home game is on Friday, February 14 against Swift Current. Puck drop is 7 p.m. Tickets are available at the Raiders Office and online here.