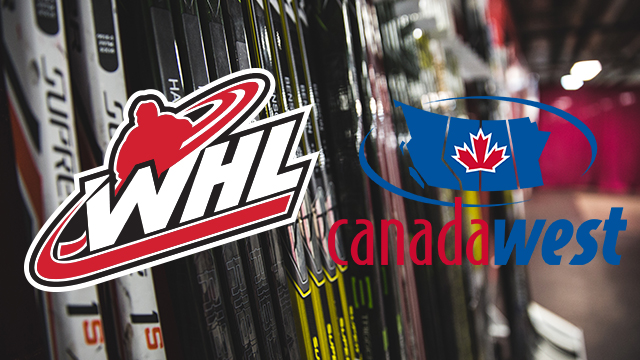 EDMONTON – The connection between the Western Hockey League (WHL) and Canada West men’s hockey was on full display Tuesday, as the conference all-star and all-rookie teams were unveiled ahead of this weekend’s CW Final between Saskatchewan and Alberta.

In total, 16 of the 18 combined all-stars and all-rookies are graduates of the WHL, while the two players who didn’t lace up in Western Canada’s premier junior circuit are products of the Ontario Hockey League (OHL).

The 16 WHL graduates are making the most of their WHL Scholarship, which provides players with tuition, compulsory fees, and textbooks for each season played in the WHL.

The Canada West all-stars and all-rookies were selected by the conference’s eight head coaches, who also voted on the Canada West major awards, which will be unveiled Thursday, March 2 at 2 p.m. MT.

The trio led their respective teams to the conference semis last weekend, with Cooke’s Huskies advancing to this weekend’s CW Final, which will feature a combined six all-stars when the Huskies and Alberta Golden Bears open their best-of-three series Friday in Saskatoon at 7 p.m. CT. Game 2 Saturday and Game 3 Sunday (if necessary) are also slated for 7 p.m. CT.

All Canada West final games can be seen live on CanadaWest.tv.

After crowning a conference champion, both Saskatchewan and Alberta will head to Fredericton for the U SPORTS University Cup, which runs Thursday, March 16 through Sunday, March 19 at the University of New Brunswick.

Canada West is the premier athletic conference in the country and is home to champion student-athletes that excel on the field, in the classroom and in their communities. Canada West and its 17 member institutions commit to a student-athlete experience where competitive excellence, scholarship and sportsmanship contribute equally towards moulding outstanding graduates and community leaders.

About the WHL Scholarship:

The WHL provides the top young talent in the west with the opportunity to develop their skills on the ice at the highest possible level, without compromising their academic goals. The WHL is committed to recognizing academic excellence. For each season played in the WHL, a player is awarded with a one-year post-secondary scholarship, which includes: tuition, compulsory fees and required textbooks. The WHL is also a leading supplier to U Sports hockey programs.