Fonstad Drafted By Canadiens In Fifth Round 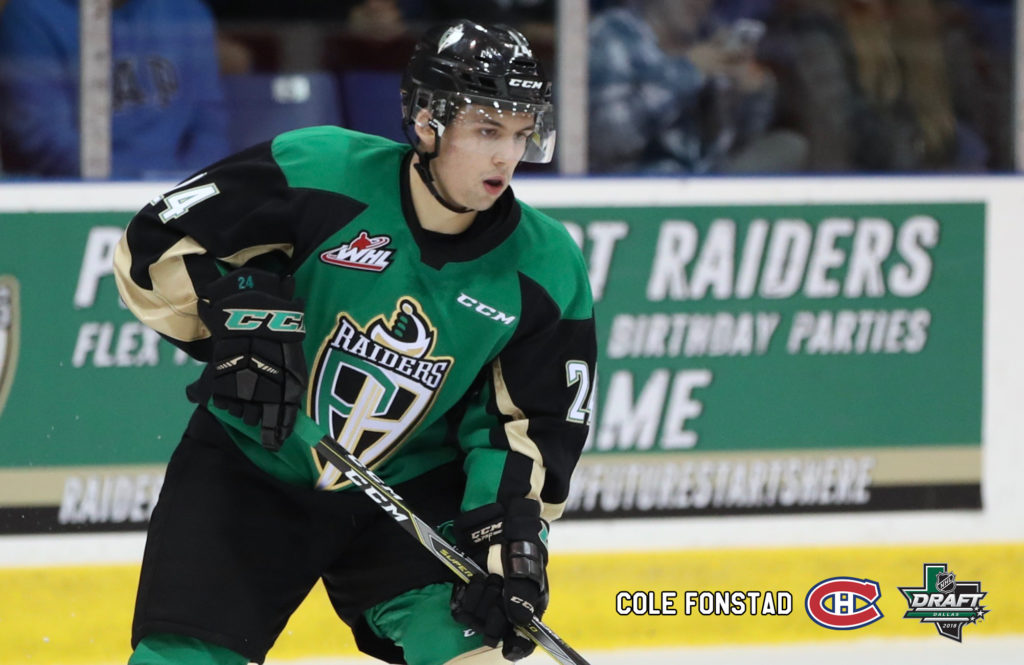 Prince Albert, SK – Cole Fonstad is heading east to one of the most storied franchises in NHL history.

On Saturday morning, Fonstad was selected by the Montreal Canadiens in the fifth round, 128th overall at the 2018 NHL Entry Draft in Dallas, TX. He’s one of four players in franchise history to be drafted by the Canadiens and first since Kyle Chipchura went 18th overall in 2004.

With the 128th pick, the Canadiens have selected forward Cole Fonstad.#NHLDraft #GoHabsGo

Fonstad is coming off an impressive draft eligible season, which was his second in the WHL. The Estevan product set new career highs in all statistical categories with 21 goals and 52 assists in 72 games played. He added four goals and an assist in the Raiders’ seven-game series with the Moose Jaw Warriors.

The fifth overall pick in the 2015 WHL Bantam Draft used his stellar campaign to earn an invitation to the 2018 Sherwin Williams CHL/NHL Top Prospects Game in January. He also represented Canada for the first time in April at the 2018 World U18 Hockey Championship in Russia.

Hey @CanadiensMTL, here's a small sample of what Cole Fonstad (@cole_fonstad) can do! #NHLDraft #GoHabsGo pic.twitter.com/AZajrhlKuk

With Fonstad being drafted, the Raiders have had a player picked in the NHL Entry Draft each of the past eight seasons. It has also been a run of players from the Raiders drafted by the Atlantic Division. Ian Scott was selected by the Toronto Maple Leafs last season, while Brendan Guhle and Vojtech Budik went to the Buffalo Sabres in the 2015 and 2016 NHL Drafts, respectively. Also, Parker Kelly signed an entry-level contract with the Ottawa Senators in September.

The Canadiens will hold their annual Development Camp next week, opening on Thursday in Brossard, QC.

The next step for the Raiders is the CHL Import Draft, which will get underway on Thursday morning.