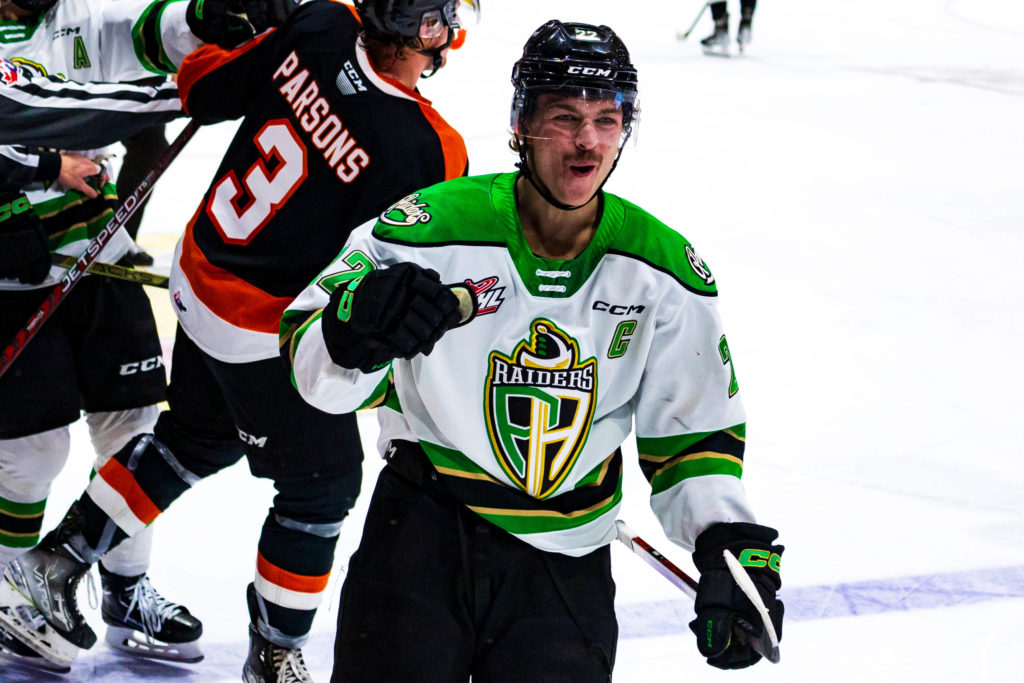 The Prince Albert Raiders picked up their tenth win of the season on Sunday night with a 4-2 win over the Tigers in Medicine Hat. All four Raider goals were scored in the second period, while the Tigers scored once each in the second and third period.

It took until the 1:49 mark of the second period to find the icebreaker between the two teams. Oasiz Wiesblatt found the game’s first goal on a Tigers powerplay early in the second period. From the right circle, Wiesblatt sniped a shot top corner past a screened Tikhon Chaika and in. His tenth goal of the season gave the Tigers a 1-0 lead early on in the middle frame.

With 10:44 left in the second, the Raiders tied the score, and it was one of the rookies getting on the board. Cole Peardon tipped a point shot from Terrell Goldsmith home, snapping a 10 game goal-less drought for his second goal of the season. Picking up the secondary assist was Brayden Dube, who picked up his first point in a Raider jersey. The goal tied the game at 1-1 midway through the middle frame, as the momentum in the game seemed to be shifting in Prince Albert’s favour.

The Raiders weren’t done there, adding three more goals in the frame. Sloan Stanick scored twice in the second period, while Evan Herman added another. On the powerplay, Stanick buried a rebound after a point shot from Landon Kosior resulted in a rebound in front. Stanick’s first of the night gave the Raiders their first lead of the night at 2-1 with just over five minutes to play in the second.

Just over three minutes later, Herman got in on the scoring. A point shot from Eric Johnston was neatly deflected in front by the Raider captain, beating Beckett Langkow to make it 3-1 with his sixth goal of the season.

With 25 seconds left in the middle frame, Stanick added his second goal of the game, converting on a feed from Herman. Stanick took a pass and walked in, before roofing a backhand beauty over Langkow. The late marker made it a 4-1 Raider lead.

After giving up the first goal of the contest, the Raiders stormed back to take a 4-1 lead heading into the third period, while leading 16-10 in shots. Part of the reason Prince Albert had a three goal lead was thanks to Tikhon Chaika, who made a save of the night candidate with a larcenous stop on Wiesblatt midway through the frame, going full splits to deny the forward of his second goal of the night.

The Tigers cut into the lead with 7:44 left in the third period. Dallon Melin struck with his fifth goal of the season for Medicine Hat to make it a 4-2 Raiders lead.

With just under four minutes left, the Tigers had a powerplay and chose to pull the goalie for the 6 on 4 powerplay. Evan Herman missed an empty net chance from center ice on the penalty kill which would have put the game away for good, but the Raiders were able to kill off the rest of the penalty anyway. On top of that, Prince Albert was able to survive the late push by Medicine Hat in the offensive zone, taking a 4-1 win on the road, and finishing the Alberta part of the road trip with a 2-1-0-0 record.

Tikhon Chaika stopped 20 of 22 shots thrown at him in his eighth win of the season, while Langkow stopped 24 of 28 shots in the loss for the Tigers.

The Raiders improved to 10-13-2-0 on the season, and will head to Manitoba for games in Brandon and Winnipeg on Friday and Saturday night.