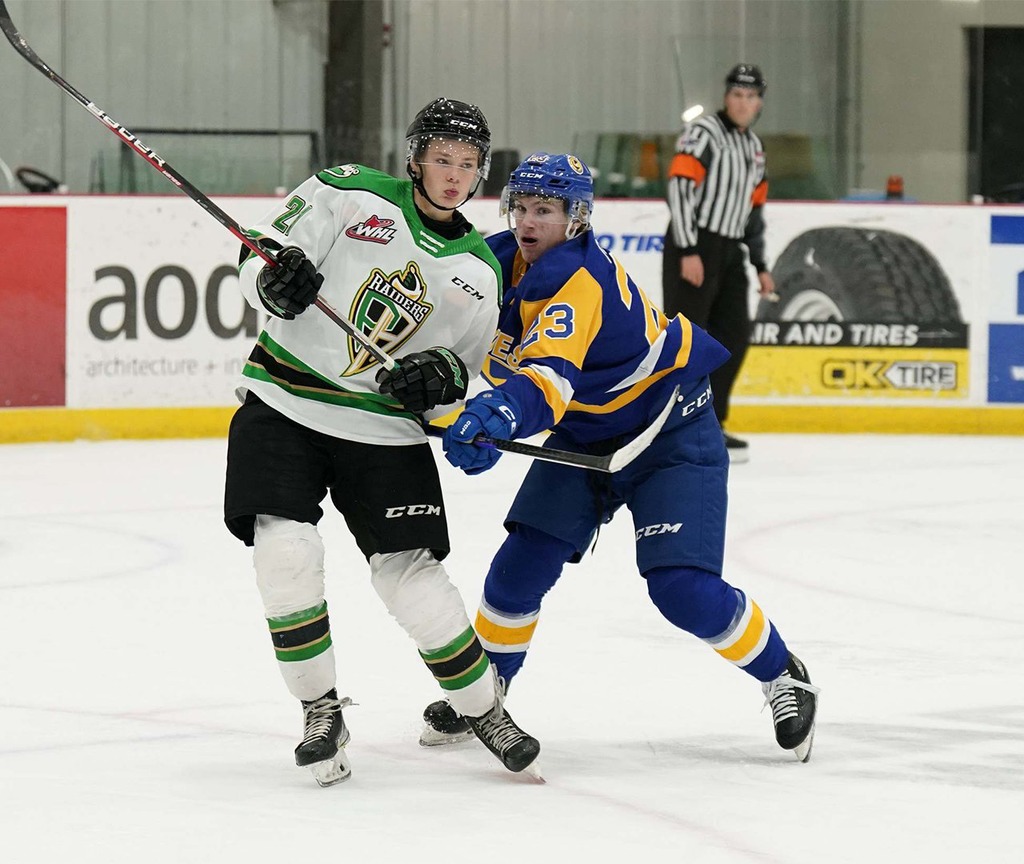 The Prince Albert Raiders defeated the Saskatoon Blades 2-1 on Saturday night in Warman, picking up a home and home split with the Bridge City Bunch to end the preseason.

The Raiders wasted no time welcoming themselves into the Legends Centre, opening the scoring just 44 seconds into the game. A beautiful centering pass from Keaton Sorensen in the corner was converted nicely by Evan Herman, who picked up his first goal of the preseason. With a split of Raiders and Blades fans in the building for the contest, the goal was met with a mix of boos and cheers, as Prince Albert jumped ahead to a 1-0 lead.

With 11:55 to go in the first the Blades tied things up. Tanner Molendyk, who finished Friday night’s game in Prince Albert with a pair of assists, added a goal to his weekend. Taking an entry pass from Smyth Rebman, Molendyk wired a shot from the slot, beating Max Hildebrand five hole, evening things up near the midway mark.

The Raiders ran into some penalty trouble after the opening two goals. They managed to kill off the opening penalty of the game dished out to Trevor Thurston, but quickly found themselves down two men with five and a half to play. First it was Cole Peardon sent to the box on a checking from behind call, and shortly after Evan Herman was sent to the box for goalie interference. The penalty kill from Prince Albert held up strong, getting the team back to even strength unscathed.

After the first period, both teams entered the dressing room deadlocked at 1-1.

While there was no scoring in the second period, it wasn’t for a lack on chances for the green and gold. The most prominent opportunity was when a pass was slid across in front to Ryder Ritchie, who narrowly missed tapping the puck into the empty net. A number of roughing penalties were dished out in the middle frame, as the intensity started to ramp up on both sides of the ice. Just 49 seconds in, Evan Herman had a meeting with Rebman, which resulted in both players being escorted to the penalty box. Cole Peardon of the Raiders, as well as Marek Scheider and Zach Moore were assessed roughing minors on top of that.

Neither team was able to convert on any powerplay opportunities in the second period, while both Hildebrand and Austin Elliot put up perfect periods in goal, sending both teams into the third period still even at 1-1.

In the third period, the Raiders had one more powerplay chance than the Blades, and it was that extra man advantage that proved to be the difference. Niall Crocker called game with 3:20 left in regulation time, converting on an original chance by Herman. Right on the doorstep, Crocker banged home his first preseason goal, and it stood up as the game winner, as the Raiders took a late 2-1 lead.

The Blades called a timeout in the late stages of the third and pulled the goalie for a neutral zone faceoff, but couldn’t get anything past Hildebrand, who secured the win for the visitors, as well as third star honours.

The 2-1 win was the third victory of the preseason for the Raiders, who kick things off for real on Friday night with their home opener once again coming against the Saskatoon Blades. Puck drop is at 7pm.