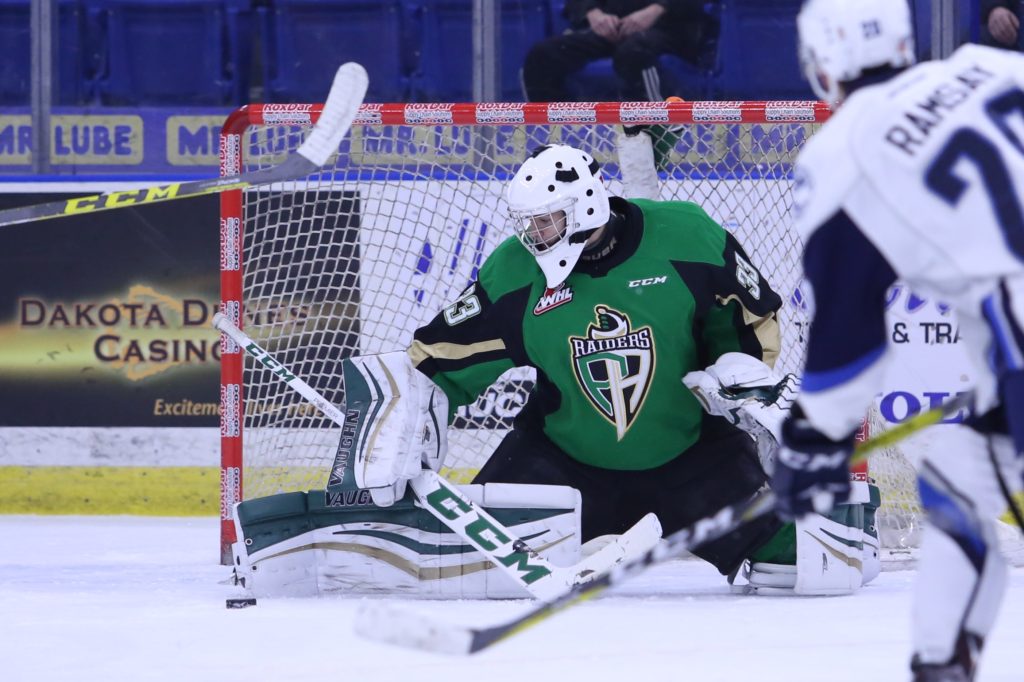 Saskatoon, SK – The young guns of the Prince Albert Raiders (8-27-1-1) sparked a third period comeback, but it wasn’t enough as they dropped a 3-2 decision to the Saskatoon Blades (14-20-3-1) on Wednesday night at the SaskTel Centre.

Miller scored both of the Raiders’ goals in the final six minutes of the game. However, with goaltender Ian Scott on the bench, they were unable to find the equalizer. The loss gave the Raiders a split of the home-and-home series that opened the second half of the 2016-17 season.

It appeared to be a scoreless first period, but Braylon Shmyr gave the Blades a 1-0 lead with five seconds remaining in the opening period. In the second, Mark Rubinchik extended the Blades’ lead with a goal at the 9:32 mark.

That two-goal lead held until there was 5:48 remaining in the third period. Miller notched his first of the game on a four-on-three power play, snapping a shot through a Luke Coleman screen on Blades goaltender Brock Hamm.

The Blades restored their lead with 3:28 remaining when Josh Paterson converted on a late power-play goal. However, Miller and the Raiders wouldn’t go away. Miller stripped Rubinchuk of the puck at the Blades’ blueline and beat Hamm to make it a one-goal game again.

Carson Miller is playing out of his mind, strips Rubinchik at the line and scores his second of the game to make it 3-2 pic.twitter.com/in3Ht23V28

It was as close as the Raiders would get. In the final minute, Coleman had a chance at the side of the net with the extra attacker, but he was unable to convert.

Scott made 39 saves in the loss for the Raiders. Hamm stopped 24 shots to pick up the win for the Blades.

The Raiders return home on Friday to tangle with the East Division-leading Regina Pats at the Art Hauser Centre. Puck drop is 7 p.m. Tickets are available here, the Raider Office or call 306-764-5348.