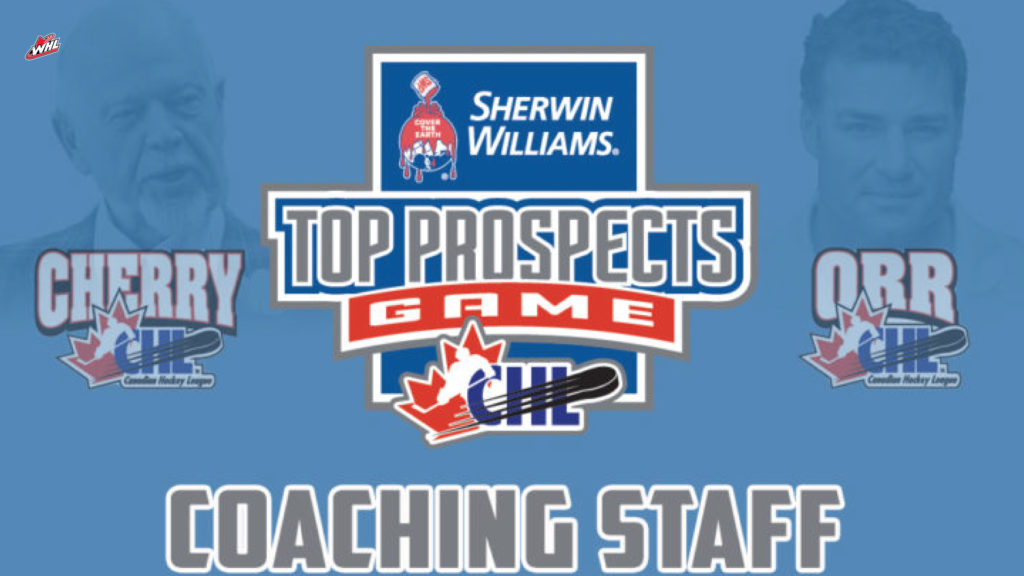 CHL alumni including Canadian hockey icon Don Cherry and 2016 Hockey Hall of Fame inductee Eric Lindros will serve as head coaches for the 23rd annual showcase that features 40 of the top CHL prospects eligible for the 2018 NHL Draft.  Team Cherry will also include the legendary Ottawa 67’s coaching pair of Brian Kilrea and Bert O’Brien along with Mississauga Steelheads head coach and general manager James Richmond.  Lindros, who will lead Team Orr, is joined behind the bench by members of the Storm coaching staff that include head coach and general manager George Burnett, associate coach Jake Grimes, and assistant coach Luca Caputi.

Cole Fonstad, who was named to the Sherwin-Williams CHL/NHL Top Prospects Game in December, will suit up for Team Orr.

“The CHL is honoured to have Don Cherry and Eric Lindros part of the 2018 Sherwin-Williams CHL/NHL Top Prospects Game,” said CHL President David Branch.  “Don is one of the key architects of this event from the inaugural game in 1996 to building the showcase it is today, and Eric is one of our league’s all-time greatest players whose contributions to the game are evidenced by his Hockey Hall of Fame induction last season.  Their participation in Guelph will certainly make this a very special experience for the players and for the fans.”

Before establishing his legacy as the star of Hockey Night in Canada, Cherry was a Memorial Cup champion as a member of the 1953 Barrie Flyers.  Earlier this season the Kingston, Ont., native was named Honourary Chairman of the CHL’s 100th Mastercard Memorial Cup Celebration large in part for his longstanding and unwavering support of Canadians in uniform which has earned him Honourary Lifetime Membership into the Royal Canadian Legion and the appointment as an Honourary Patricia by the Princess Patricia’s Canadian Light Infantry.  Recognized with Bobby Orr as a builder of the Sherwin-Williams CHL/NHL Top Prospects Game, Cherry will be participating in this event for the 17th time since 1996.  The 1976 Jack Adams Trophy winner holds an all-time record of 5-11 which includes four head-to-head wins against Orr (1996, 1998, 2003, 2010) in 13 games between 1996 and 2016, a win over John Davidson in 2005, plus losses opposite Doug Gilmour and Wendel Clark in 2011, and Mike McPhee in 2013.  Since 2006, the winning team has been presented with the Don Cherry and Bobby Orr CHL/NHL Top Prospects Game Trophy engraved with the names of every player to ever participate in this prestigious event.

Lindros earned his prestigious Hockey Hall of Fame induction for achieving success at all levels of the game.  The London, Ont., native hoisted the Memorial Cup as a member of the 1990 Oshawa Generals, received CHL Player of the Year honours in 1991 with 149 points including 71 goals and 78 assists in 57 games, and was chosen first overall in the 1991 NHL Draft.  Over the course of his distinguished NHL career, Lindros accumulated career totals of 372 goals and 493 assists for 865 points. The 6-time NHL All-star was the recipient of both the Lester B. Pearson award and the Hart Trophy.  He represented Canada on multiple occasions including the World Junior tournaments winning gold in both 1990 and 1991.  He was also a member of the championship team in the 1991 Canada Cup, played in the World Cup in 1996, and represented Canada in three separate Olympic games winning both silver and gold medals.  As the Honorary Chair for the annual See the Line symposium, Lindros continues to make a difference with his support as an advocate of world-class sport concussion research, care and awareness. In 2016, he was appointed to the Rowan’s Law Advisory committee tasked with implementing Canada’s first concussion related legislation, and in 2017 received the Meritorious Service Medal, one of the highest civil decorations within the Canadian system of honours.  His number 88 jersey was retired by the Generals in 2008 and will soon hang from the rafters in Philadelphia following a ceremony scheduled by the Flyers for January 18 when they face the Toronto Maple Leafs.

Team Cherry will feature members of the host Storm including forward Cam Hillis and defenceman Ryan Merkley, while Lindros’ Team Orr fittingly includes Generals Allan McShane and Serron Noel.  Captains and alternates for both teams will be announced at a later date.

Nine WHL players were named to the annual game back in December 2017.

All 14 CHL players chosen in the first round of the 2017 NHL Draft competed in last year’s game played in Quebec including first overall pick Nico Hischier of the Halifax Mooseheads who captained Team Orr opposite Team Cherry who was led by captain Nolan Patrick of the Brandon Wheat Kings selected second overall in June.  In 22 years, a total of 307 CHL players from this event have been chosen by NHL clubs in the first round of the NHL Draft representing close to 47% of all players selected.  Since the event was first introduced in 1996 the game has featured 14 players selected with the first overall pick in the NHL Draft including Hischier, Connor McDavid, Aaron Ekblad, Nathan MacKinnon, Ryan Nugent-Hopkins, Taylor Hall, John Tavares, Steven Stamkos, Patrick Kane, Marc-Andre Fleury, Rick Nash, Vincent Lecavalier, Joe Thornton, and Chris Phillips.

The 2018 Sherwin-Williams CHL/NHL Top Prospects Game is proudly supported by title partner Sherwin-Williams, and CHL associate sponsors CIBC and Cooper Tires.  The game will be broadcast live on Sportsnet and TVA Sports.

Tickets are still available through the box office at 1-519-837-9690 or visit Ticketmaster to purchase online.

Ask Sherwin-Williams™
For 150 years, Sherwin-Williams has been an industry leader in the development of technologically advanced paint and coatings. As North America’s largest specialty retailer of paint and painting supplies, Sherwin-Williams is dedicated to supporting both do-it-yourselfers and painting professionals with exceptional and exclusive products, resources to make confident colour selections and expert, personalized service at its more than 4,000 neighbourhood stores. For more information, visit sherwin-williams.ca. Join Sherwin-Williams on Facebook, Twitter, Pinterest, Instagram, LinkedIn and Tumblr.