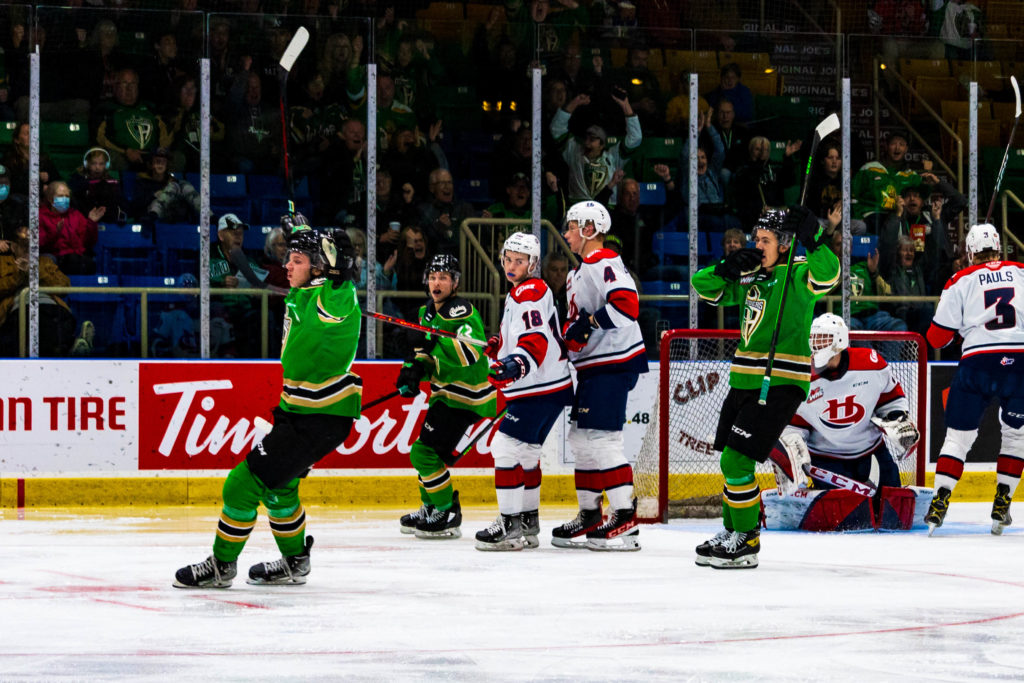 The Prince Albert Raiders picked up their second straight win on Wednesday night, shutting out the Lethbridge Hurricanes 3-0 at the Art Hauser Centre. Playing a large part in the win was goaltender Tikhon Chaika, who turned aside all 29 shots he faced.

The Raiders were heavily outplayed in the first period, outshot 10-2 in the opening 20 minutes, but followed up with a better second period, outshooting the ‘Canes 8-5 in more of a back and forth frame. However both periods saw no score, and both teams went into the third in search of a winner.

It was at the 2:40 mark of the final regulation frame when the opening goal was scored, and it came off the stick of Carson Latimer, who was playing his first game with an ‘A’ on his jersey. On the Raiders’ sixth powerplay of the game, Latimer struck with a snipe from the slot on a follow up chance from Sloan Stanick. His shot through traffic beat Jared Picklyk for the first goal of the contest, putting the Raiders up 1-0.

Less than two minutes later, Keaton Sorensen capitalized on an outstanding solo effort from Stanick. Stanick worked his way through Hurricane defenders and went for the highlight reel wraparound goal and was denied, but Sorensen came crashing to the net looking for the loose puck. Finding it, he kicked it to his stick and banged a shot home to put the Raiders up 2-0 early in the third for a couple of quick tallies.

With less than three minutes to go in the third, with the Raiders shorthanded for the sixth time and the Lethbridge net empty, Landon Kosior sealed the deal with a long clearing attempt from inside his own blue line. The shot found the back of the net with 2:55 left in the game, and put the Raiders up 3-0.

Chaika shut the door the rest of the way, turning aside 14 shots in the third period. He earned his fourth career shutout, taking home first star honours in the process.

The Raiders improved to 2-3-1-0 on the season with the win. The team will hit the road for three straight games starting on Friday night in Swift Current.