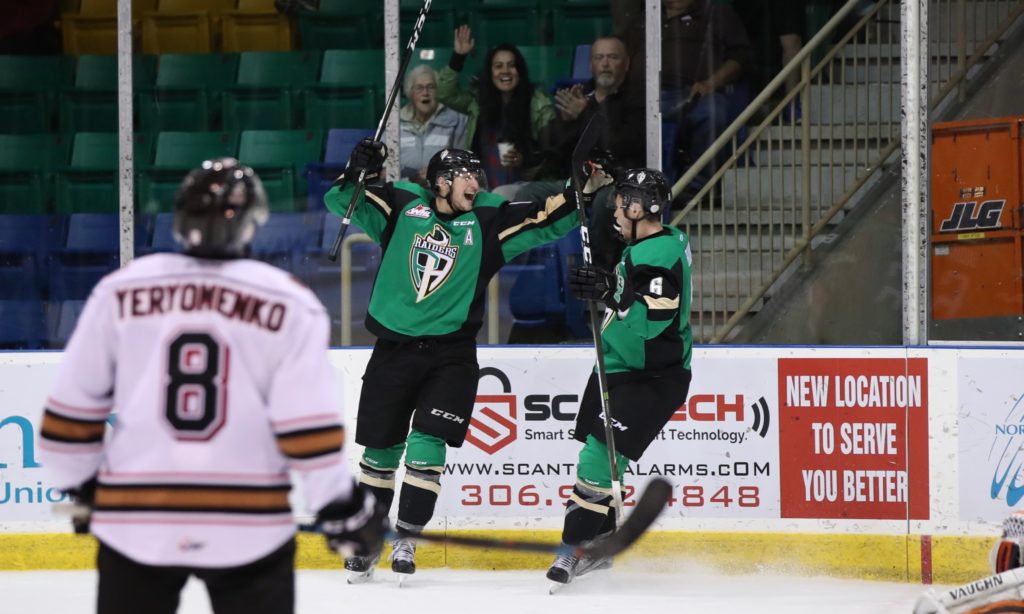 Prince Albert, SK – Vojtech Budik scored at the 3:07 mark of overtime to give the Prince Albert Raiders a 6-5 win over the Calgary Hitmen on Friday night at the Art Hauser Centre.

Budik batted in a rebound off of Jordy Stallard’s shot to give the Raiders their first win of the 2017-18 season.

The Raiders took their first lead of the WHL season when Parker Kelly got the Raiders on the board with 10:03 to play in the opening period. About three minutes later, Justyn Gurney tied it up for the Hitmen. Before the end of the period, Devon Skoleski beat Nick Schneider to give the Raiders a 2-1 advantage after 20 minutes.

In the second, the Hitmen scored three goals in about two-and-a-half minutes to take a 4-2 lead. First, former Raider Matteo Gennaro scored a shorthanded goal to tie the game. Then, Andrei Grishakov and Jakob Stukel each solved Nicholas Sanders to put Calgary up two.

Those three goals spelled the end of the night for Sanders, who finished the game with 15 saves on 19 shots.

Late in the period, Max Martin scored off the post, off Schneider, and in to bring the Raiders back within one.

Jordy Stallard tied the game 10:35 into the third period. With 2:59 remaining in the third, Spencer Moe scored his first goal of the year to give the Raiders a 5-4 lead. However, Gennaro found the back of the net for the second time just a minute later to tie it up and send the game to overtime.

In the extra frame, Stallard and Budik entered the zone on a two-on-one rush. Stallard’s shot was stopped, but Budik followed up and pounced on the rebound to give the Raiders the win.

In relief, Curtis Meger stopped six shots to pick up his first career win. Schneider made 24 saves in a losing effort.

Tomorrow night, the Raiders are hosting WHL Suits Up with Don Cherry to Promote Organ Donation – Presented By RE/MAX Night when the Medicine Hat Tigers come to town. The Raiders will be wearing specially designed Don Cherry-themed jerseys that will be auctioned off with 100 per cent of the proceeds being donated to the Saskatchewan Branch of The Kidney Foundation of Canada.