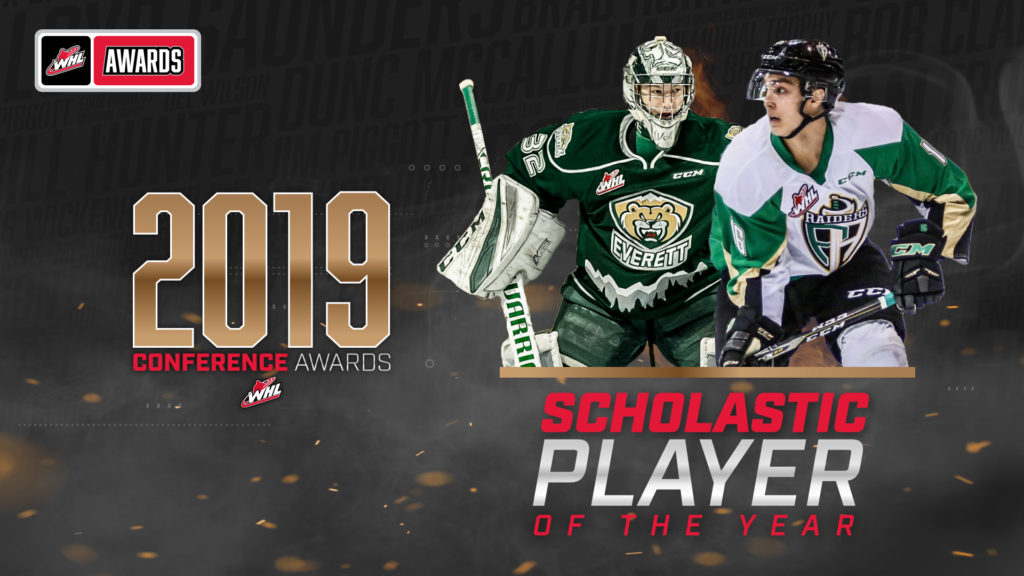 The Daryl K. (Doc) Seaman Memorial Trophy will be presented at the 2019 WHL Awards on Wednesday, May 1, in Red Deer, Alta. It is awarded annually to the WHL’s Scholastic Player of the Year and recognizes a player who has demonstrated academic excellence while competing in the WHL.

In 1996, the Scholastic Player of the Year Trophy was named in honour of Daryl K. (Doc) Seaman, a pioneer in promoting higher education and hockey as well as a leading supporter of the WHL’s education and scholarship programs.

Eastern Conference – Jakob Brook (Prince Albert Raiders)
In his first full season in the WHL, Brook skated in 61 games and enjoyed a strong start to his WHL career by registering 12 points (6G-6A).

On March 18, Brook was recognized as the Raiders Scholastic Player of the Year for the 2018-19 season.

“Jakob is an outstanding Grade 11 student who has excelled in his academic studies this year,” said Geraldine Arpin, Education Advisor for the Raiders. “His work ethic, maturity, and diligence to his class work make him an exemplary leader for those around him.”

Brook was originally selected by the Raiders in the second round (40th overall) of the 2017 WHL Bantam Draft.

Western Conference – Dustin Wolf (Everett Silvertips)
In his second season in the WHL, Wolf enjoyed a career year, registering a record of 41-15-2-2 with a 1.69 goals-against average, .936 save percentage and seven shutouts in a career high 61 appearances.

The product of Tustin, Calif., excelled in the classroom as well, maintaining a 100 percent average for the current academic year, as well as an overall average of 98.8 percent for his high school years. In Grade 12 courses, Wolf achieved perfect grades in English 12, Statistics, Economics, and American Government.

“Dustin is very dedicated and driven to graduate with a 4.0 GPA,” said Darren Parsons, Education Coordinator for the Silvertips. “He is very mature, reliable, and very organized. He has done an excellent job with combining the rigors of hockey to his high educational demands.”

Ranked 17th among North American goaltenders by NHL Central Scouting for the 2019 NHL Draft, Wolf was originally selected by the Silvertips in the fifth round (104th overall) at the 2016 WHL Bantam Draft.