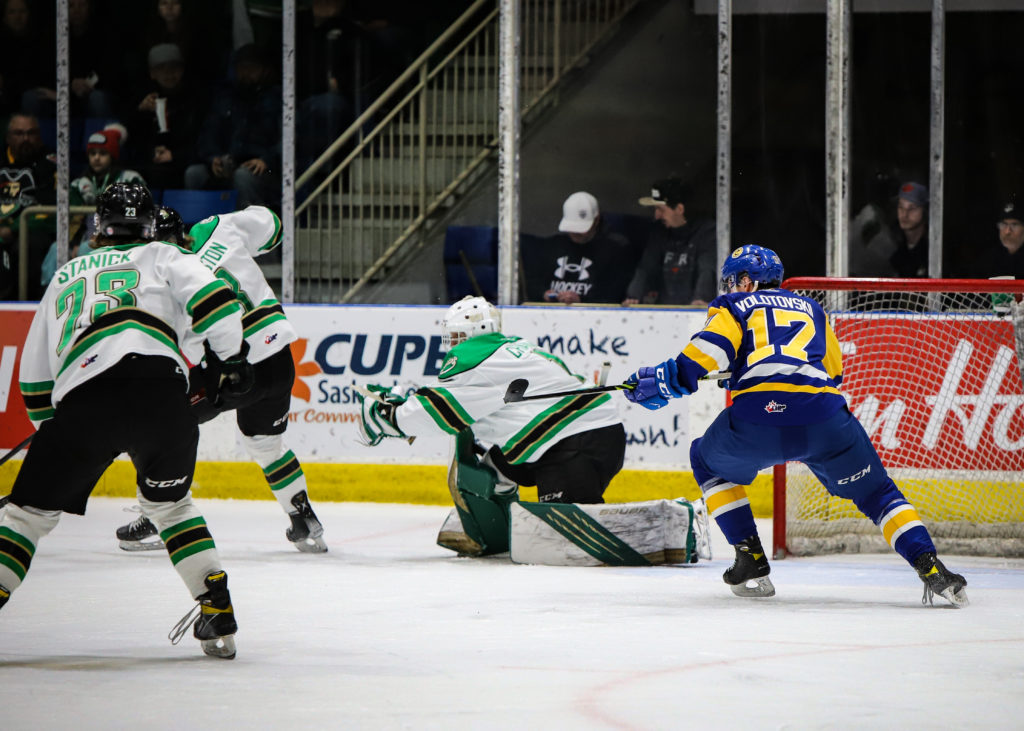 The Prince Albert Raiders erased a two goal deficit in the third period on Friday night at the Art Hauser Centre and forced overtime, but the Saskatoon Blades scored in the extra frame to come out with a 4-3 win. Special teams proved to be the difference, especially during a five minute stretch in the third period, which saw Saskatoon work with three 5 on 3 man advantages, where they scored two goals.

The Raiders saw themselves on two man advantages in the first period, and capitalized on the second one. With Morgan Tastad in the box serving a hooking penalty, Prince Albert took just 41 seconds on the powerplay to open the scoring. Receiving a pass from Terrell Goldsmith, Justice Christensen wired a point shot through traffic, beating a screened Ethan Chadwick to put the Raiders up 1-0 on his first goal in a Raider jersey.

A couple of minutes later, Trevor Thurston introduced himself into the game with a thunderous hit near the benches. The physicality continued on the green and gold side, with hits thrown around until the final buzzer of the first period. Outshooting Saskatoon 7-6 in the opening frame, the Raiders brought a 1-0 lead into the second period.

The second period did not fare as well for the home side, who saw themselves killing three consecutive 5 on 3 Saskatoon powerplays. Two of those powerplays ended up with the puck finding the back of the net. Trevor Wong and Vaughn Watterodt scored 1:22 apart, giving the Blades a 2-1 lead just seven minutes into the second. After Watterodt’s goal, Trevor Thurston was sent to the penalty box to serve a spearing double minor, putting the Raiders down two men once again.

A strong penalty kill allowed the Raiders to come away surrendering just two goals, thanks in part to a key block by Eric Johnston which shattered his stick.

However, with 6:31 to go in the second, Spencer Shugrue added another goal for the Blades, cashing in on a rebound in front. All three Blades players potted home their first goals of the preseason, as the visitors took a 3-1 lead into the third.

A massive turnaround in the third period saw the Raiders pull even early. Just 2:09 into the final regulation frame, Trevor Thurston pounced on a loose puck in the high slot after a traffic jam in front of the net. After Chadwick couldn’t cover the rebound, the puck was poked right to Thurston, who fired a shot beating everything in front, cutting the Blades’ lead to 3-2. Just over three minutes later, it was Christensen who tied things up with his second goal of the night; another laser shot from the point beating traffic.

The rough stuff started to happen with just over two minutes left in the third when Jesiah Bennett dropped the gloves with Tyler Parr near centre ice. A heated exchange saw both forwards’ night end with less than five minutes to go in the game. On the ensuing faceoff, Ben Saunderson of the Blades was assessed an interference penalty, possibly saving the game for Saskatoon, and the Raiders went to the powerplay with a chance to win it late. However the man advantage went by the waist side, and the game went to overtime searching for a winner, deadlocked at 3-3.

In the extra frame, it took just 1:15 for Lukas Hansen to ice the game for Saskatoon. A nifty hand-eye play resulted in the puck beating Tikhon Chaika and finding the back of the net, sending the Blades home with the 4-3 win.

Chaika stopped 18 of 22 shots thrown at him, while Chadwick stopped 28 of 31 shots in the win.

The Blades went 2/7 on the powerplay, while the Raiders went 1/4.

Next up for both clubs is the second half of a home and home set to wrap up the preseason. While it’s a home game for the Blades, the game will be played in Warman at the Legends Centre. Puck drop is slated for 7pm.