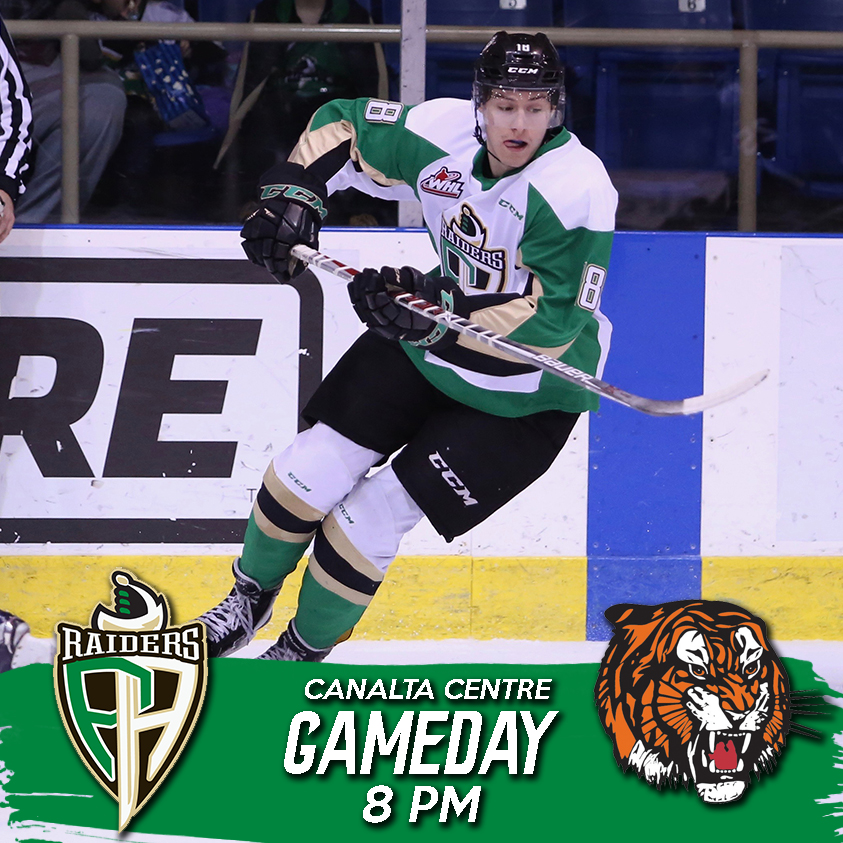 RAIDER REVIEW: The Prince Albert Raiders (13-36-3-2) open a three-game road trip tonight at the Canalta Centre when they take on the Central Division leading Medicine Hat Tigers (37-16-1-0). The Raiders are coming off of a 6-3 loss to the Red Deer Rebels on Friday night. The Rebels jumped out to a 2-0 first period lead on goals from Evan Polei and Michael Spacek. The Raiders tied it in the second with goals scored by Simon Stransky and Sean Montgomery. Cameron Hausinger and Spacek scored back to back to restore the Rebels’ two-goal lead. Cavin Leth scored with 32 seconds left in the second to make it a 4-3 game after two. In the third, the Rebels tacked on two empty-net goals to round out the scoring. Nicholas Sanders stopped 27 shots in the loss for the Raiders.

VS. MEDICINE HAT: This is the third meeting of the year between the Raiders and the Tigers and the final game this year in Medicine Hat. These two teams last squared off on November 29 at the Canalta Centre when the Tigers skated to a 4-1 victory. Cole Fonstad scored the Raiders’ lone goal in the loss.

ROAD WARRIORS: The Raiders have been stringing together wins away from the Art Hauser Centre. The team is riding a four-game road winning streak after knocking off the Broncos in Swift Current last weekend. Since the New Year began, the Raiders have points in five of their eight road games.

TAKING ON THE TIGERS: The rookies have had the most offensive success against the Tigers so far this season. Cole Fonstad has scored both goals against Medicine Hat, while Carson Miller has registered the primary assist on both markers.

INJURY UPDATE: Raiders centre Jordy Stallard will be out for the remainder of the season after undergoing successful surgery on Monday. The Winnipeg Jets prospect is expected to be ready for training camp.

NEXT UP: The Raiders continue their road trip on Friday night when they take on the Lethbridge Hurricanes at the Enmax Centre. The trip wraps up the following night when the Raiders visit the Kootenay ICE in Cranbrook. Both games begin at 8 p.m. The Raiders return home on Wednesday, February 15 when they host the Brandon Wheat Kings. Puck drop is 7 p.m. Tickets can be purchased here, in the Raider Office, or by calling 306-764-5348.