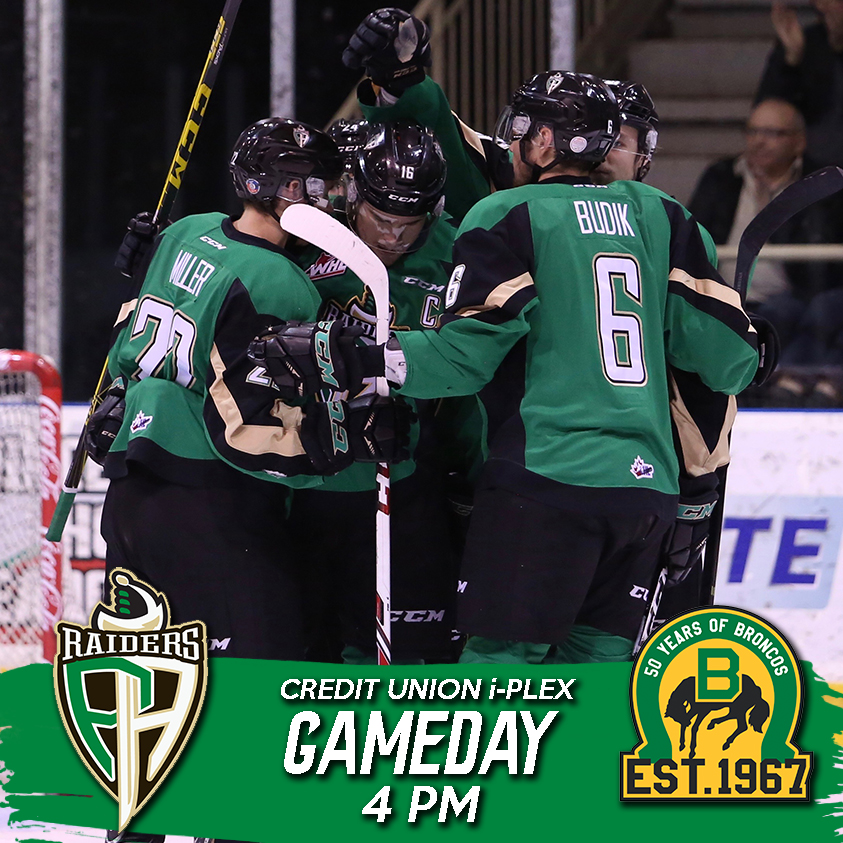 RAIDER REVIEW: The Prince Albert Raiders (12-35-3-2) wrap up the month of January on the road when they visit Swift Current to tangle with the Broncos (25-16-3-5) this afternoon. The Raiders are coming off their fourth win in five games after taking down the Moose Jaw Warriors 5-4 at the Art Hauser Centre on Saturday night. After Moose Jaw scored first, Parker Kelly and Curtis Miske responded with first period goals to give the Raiders a 2-1 advantage. Early in the second, Simon Stransky tallied his 14th of the year. However, the Warriors scored twice to make it a 3-3 game after 40 minutes. In the third, the Warriors regained the lead at the 4:12 mark. However, Cavin Leth scored shorthanded to tie the game and Cole Fonstad tallied the game-winning goal on a late power play to give the Raiders the win. Nicholas Sanders made 27 saves to earn his fourth win of the year in goal.

VS. SWIFT CURRENT: This is the seventh of eight contests between the Raiders and the Broncos this season and the last one at the Art Hauser Centre. In the last game between the two clubs, the Raiders fell 5-2 to the Broncos in Swift Current on Jan. 7. Kolten Olynek and Simon Stransky scored the Raiders’ goals in the game.

ROAD WARRIORS: The Raiders are heading into Swift Current with three consecutive road wins under their belts. Last weekend, the Raiders swept a three-game trip through Alberta.

FILLING THE NET: Overage forward Cavin Leth has settled into an offensive groove over the last week. The former Swift Current Bronco has four goals in the last four games, including the game-tying goal on Saturday night. Leth now has 15 goals and 18 points (both career highs) in 43 games with the Raiders this season.

FULL SLATE: Sunday marks the conclusion of the Raiders’ busiest month as the team plays their 15th game of the January. It is also the third consecutive weekend that the Raiders have played three games in three nights. The Raiders have a 4-7-2-1 record in January. The four wins in January are the most in a month so far this season.

NEXT UP: The Raiders are back on the ice on Friday night when they host the Red Deer Rebels. Game time is 7 p.m. Tickets can be purchased here, in the Raider Office, or by calling 306-764-5348.