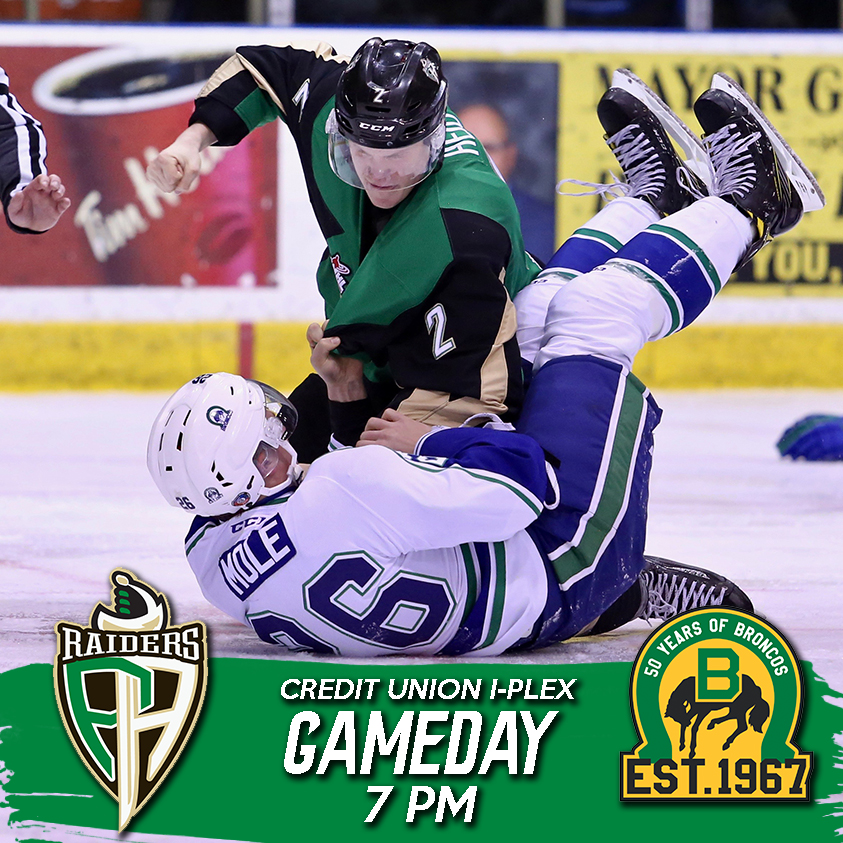 RAIDER REVIEW: The Prince Albert Raiders (7-24-1-1) venture to Swift Current to begin a home-and-home series with the Swift Current Broncos (16-10-3-4) tonight at the Credit Union I-Plex. The Raiders are coming off of a 4-1 loss to the Moose Jaw Warriors at Mosaic Place on Wednesday night. After a scoreless first period, Jayden Halbgewachs and Noah Gregor found the back of the net in the second period to give the Warriors a 2-0 lead after 40 minutes. In the third, Tanner Jeannot and Josh Brook also scored for the Warriors. Late in the period, Austin Glover continued his point streak to break the shutout for the Raiders. Ian Scott got the start in net and made 42 saves in a losing effort.

VS. SWIFT CURRENT: This is the fourth meeting of the season between the Raiders and the Broncos and the second in Swift Current. The Broncos have won all three games in the season series so far. In the last contest, Ryan Graham had two goals for the Broncos in a 3-1 win over the Raiders on November 23. Cavin Leth scored the Raiders’ lone goal in the loss.

GLOVER KEEPS GOING: 20-year-old Austin Glover has been on a tear since the calendar turned to December. Glover has recorded at least a point in all seven games in the final month of 2016, picking up five goals and five assists in that span. The Clavet product now has 11 goals and 12 assists this season, which places him second in team scoring behind Simon Stransky.

TOP PROSPECT: Raiders goaltender Ian Scott will be taking on some of the best NHL Draft eligible players in the CHL in January when he takes part in the 2017 Sherwin-Williams CHL/NHL Top Prospects Game. Scott was one of two goaltenders named to Team Cherry for the game on January 30, 2017 in Quebec City, QC. In NHL Central Scouting’s November Player To Watch List, Scott was given an “A” rating, which indicates a potential first-round pick in the NHL Draft.

NEXT UP: The Raiders close out the first half of the season in the second leg of the home-and-home series with the Broncos on Saturday night at the Art Hauser Centre. Puck drop is 7 p.m. Tickets can be purchased here, in the Raider Office, or by calling 306-764-5348. After Saturday’s game, the players depart for the holiday break, returning in time to host the Saskatoon Blades on December 27. Game time is 7 p.m.