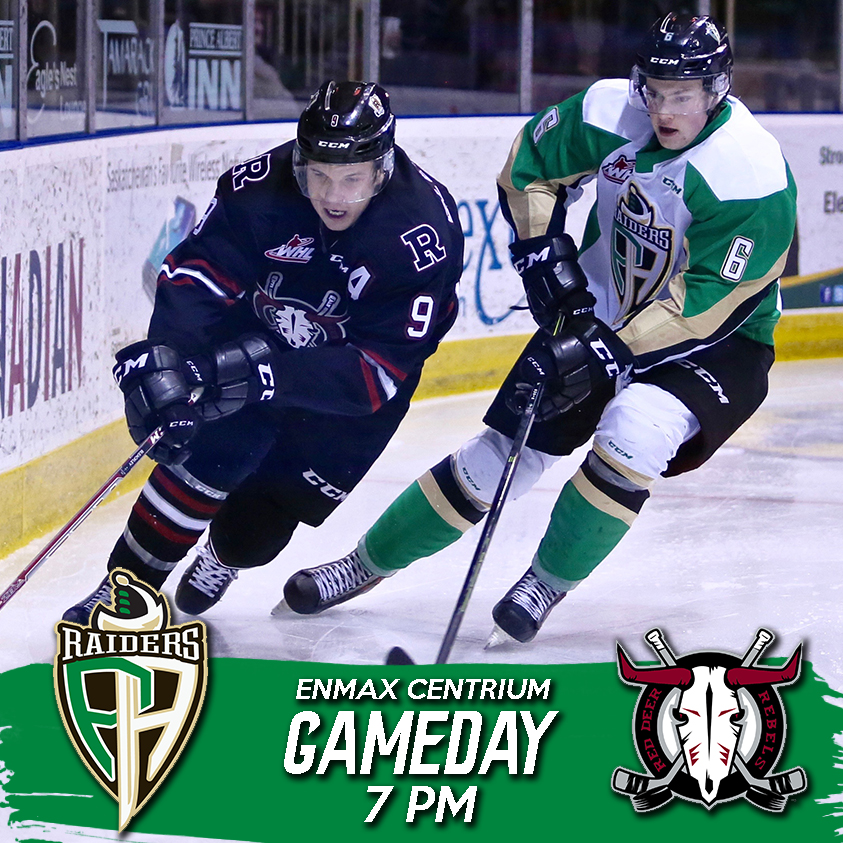 RAIDER REVIEW: The Prince Albert Raiders (3-6-1-0) take on the Red Deer Rebels (6-3-1-1) for the first time this season as the Raiders’ Alberta road trip continues. Last night in Edmonton, the Raiders fell 3-1 to the Oil Kings at Rogers Place. Parker Kelly scored the lone goal for the Raiders in a losing effort. Ian Scott made 35 saves in goal for the Raiders.

VS. RED DEER: This is the first meeting of the season between the Raiders and the Red Deer Rebels. Last season, the Rebels won the season series 3-1, including two wins at home over the Raiders.

HOMETOWN HERO: Luke Coleman’s eyes must light up when he sees the Red Deer Rebels appear on the schedule. In his short time in the WHL, the Red Deer product has five points in six games against his hometown team. He scored his first career WHL goal in Red Deer on February 27, 2015 after joining the Raiders late in the season.

MILESTONE MAN: While it was Cavin Leth’s first game as a Raider on Friday night in Edmonton, he’s much longer in the tooth. Leth dressed in his 200th career WHL game on Friday night after being acquired by the team on Thursday evening He previously suited up for the Swift Current Broncos and the Seattle Thunderbirds.

MAKING THEIR DEBUTS: Along with Cavin Leth, Adam Kadlec and Nicholas Sanders were in uniform for the first time as a member of the Raiders. Kadlec was the only one to get his name on the scorecard, finishing the game with a minus-two rating. Sanders served as Ian Scott’s backup on Friday night.

U16 UPDATE: Rhett Rhinehart will be playing for gold at the 2016 Western Canada U16 Challenge on Sunday afternoon. With Team Alberta’s 3-2 win over Team B.C., Rhinehart and Alberta advance directly to Sunday’s final. Team Saskatchewan, which features Adam Herold, Luc Marleau and Eric Pearce, will take on B.C. on Saturday in the semifinal.

NEXT UP: The Raiders conclude their weekend road trip when they head to Calgary to tangle with the Hitmen. Game time is 4 p.m.  The next Raiders’ home game is on Friday, October 28 against the Spokane Chiefs. Puck drop is 7 p.m. For tickets, visit raiderhockey.com or click here.