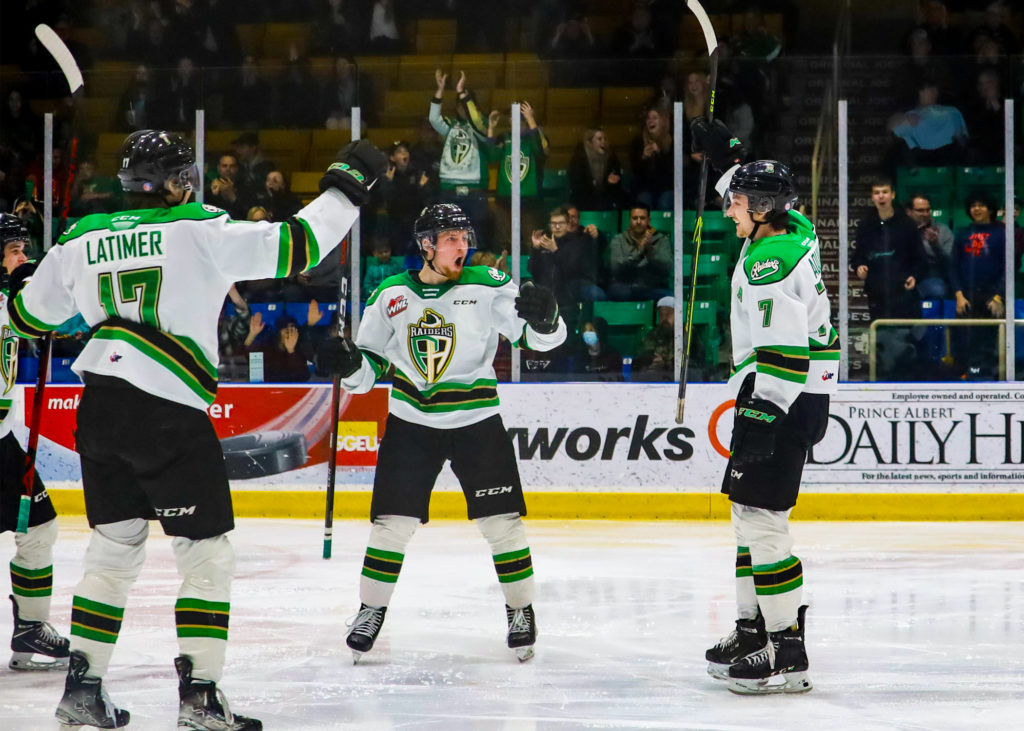 Prince Albert, Sask. – The Prince Albert Raiders stayed alive with a 3-1 win over the Winnipeg ICE in Game 4 of their Round 1, best-of-seven series on Wednesday night in front of a boisterous crowd at the Art Hauser Centre.

Remy Aquilon, Eric Johnston, and Sloan Stanick all scored in the series-extending win for the Raiders.

The teams traded chances in the first period. Stanick pulled away to create a breakaway, but his backhander was turned away by Daniel Hauser. At the other end of the ice, Tikhon Chaika used his blocker to deny a partial breakaway by Conor Geekie.

The Raiders broke the deadlock early in the second period on the power play. Aquilon fired a shot from the middle of the point that got through a pair of screens in front of Hauser at the 1:53 mark of the period for his first goal of the WHL Playoffs.

Related Links
Game Highlights Gallery Post-Game Highlights
Late in the frame, the two teams played end-to-end hockey with quality chances at both sides. Chaika was able to follow the bouncing puck on a Zachary Benson pass to deny Matthew Savoie of a shot in the slot. Going the other way, Stanick deked around Jonas Woo but his backhanded attempt found the corner of the crossbar and left post.

The Raiders extended their lead 1:06 into the third period. Johnston picked off a clearing attempt at the top of the right faceoff circle. He put a shot towards goal that redirected off the skate of Tanner Brown and past Hauser to give the Raiders a 2-0 lead with Johnston’s first of the postseason.

Chaika kept the ICE at bay with another big save after Savoie set up Benson with a great pass. Benson tried to cut across the top of the crease, but Chaika met him at the right post with his pad to keep the puck out.

The ICE broke the shutout attempt with 1:09 remaining in the third with a power-play goal off the rush. Geekie slipped a backhanded pass across the crease to Mikey Milne who one-timed it past Chaika to make it a 2-1 game.

The Raiders responded quickly with an empty-net goal. Stanick was rewarded by burying the empty-netter from the blueline for his first of the WHL Playoffs to round out the scoring at 3-1 with 49.3 seconds left.

Chaika finished the game with 26 saves for his first win of the WHL Playoffs. Hauser stopped 20 shots in the loss.

The Raiders head back to Winnipeg for Game 5 on Friday night at Wayne Fleming Arena. Game time is 6 p.m. CST. Catch the game on 900 CKBI with Rob Mahon, watch on WHL Live on CHL TV, or head to The Rock and Iron Club House or Original Joes.

If necessary, the series returns to the Art Hauser Centre for Game 6 on Sunday evening. Game time would be 6 p.m. CST.