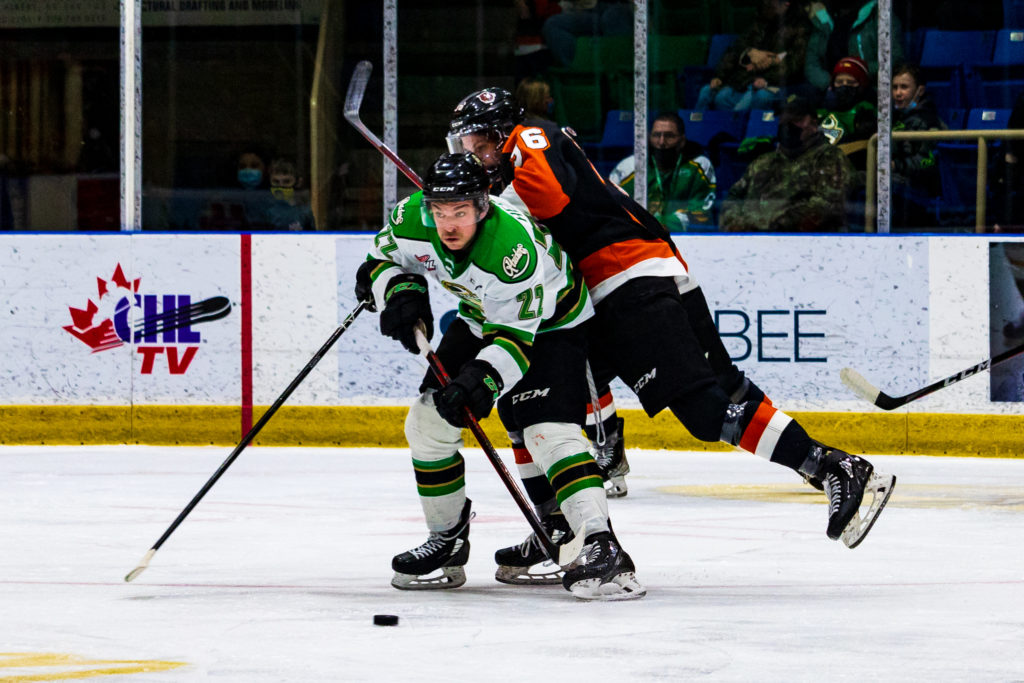 Herman potted a pair of goals and added an assist in the loss. Harrison Lodewyk and Zachary Wilson also scored in the loss for the Raiders.

The Tigers opened the scoring midway through the first period. Noah Danielson sent Oasiz Wiesblatt in on a partial breakaway. He made a move to his backhand to slide the puck past Tikhon Chaika to make it 1-0.

With 4:05 left in the opening frame, the Raiders tied things up. After Carson Latimer made a beautiful deke to get into the zone on the power play, he worked the puck around to Remy Aquilon. The overage blueliner hit Herman with a pass on the left wing. Herman stepped in a shot and picked the left corner over Garin Bjorklund’s shoulder for his team-leading 15th of the season.

Medicine Hat regained the lead 4:03 into the second period. Brendan Lee tipped Reid Andresen’s shot through Tikhon Chaika to give the Tigers a 2-1 lead.

Just 18 seconds later, the Raiders tied things up again. Tayem Gislason carried the puck into the zone on the right wing. He found Herman with a cross-zone backhanded pass and the The Pas, Man. product finished off the backdoor feed for his second of the night and 16th of the season.

Wilson gave the Raiders their first lead at the 6:04 mark of the second. Nolan Allan was able to skate to the left faceoff circle and get a shot on Bjorklund, who got a piece of it. The puck trickled behind him and Wilson was able to dive to knock the puck over the goal line for his second of the season.

The Tigers tied things up with 8:57 to go in the middle frame during a period of four-and-four hockey. Gleb Ivanov found the training Noah Danielson with a pass. Danielson was able to skate into the slot and fire a shot through a screen to beat Chaika and make it 3-3.

Related Links
Game Highlights Gallery Post-Game Interviews
The Raiders regained their lead with 3:06 left in the second. Lodewyk picked off a Pavel Bocharov feed deep in the Tigers end. He went off the right post and in for his second of the season, putting the Raiders ahead 4-3.

Before the end of the second, the Tigers tied things again. Ivanov finished off a one-timer from the right point to send the game to the intermission tied at 4-4.

At the 3:33 mark of the third, Wiesblatt struck again for the Tigers. On a two-on-one rush, Lee set up Wiesblatt with a one-timer for his second of the contest to make it 5-4 for Medicine Hat.

The Raiders pressed for the equalizer for the rest of the period, including a power play with 6:52 remaining. On the man advantage, Landon Kosior whistled a shot just wide of the right post from the left wing. Sloan Stanick nearly tipped home the tying goal from the top of the crease.

It was the Tigers that scored the next goal as Wiesblatt found the empty net with 1:31 to wrap up his hat trick and the scoring at 6-4 for the Tigers.

Chaika made 21 saves in the loss for the Raiders. Bjorklund turned aside 31 Raider attempts to pick up the win.

The Raiders are off until Tuesday night when they travel for the first of two consecutive games in Regina against the Pats. Game time is 7 p.m. Catch the game on WHL Live on CHL TV, or head to either The Rock And Iron Club House or Original Joe’s to take in the action.

The next Raiders’ home game is on Saturday, January 29 when the Brandon Wheat Kings visit the Art Hauser Centre. Puck drop is 7 p.m. Tickets are available at SaskTix.ca.