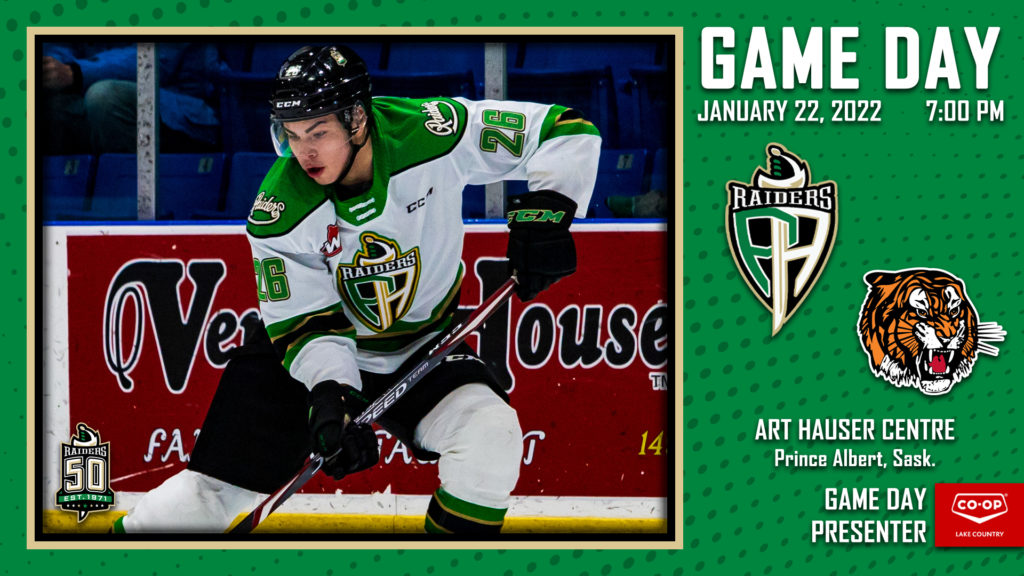 RAIDER REVIEW: The Raiders (15-20-1-1) host the Medicine Hat Tigers (7-25-3-1) at the Art Hauser Centre for the final time this season. Last night at home against Winnipeg, the Raiders dropped a 5-2 game to the ICE. Tayem Gislason and Reece Vitelli were the Raider goal scorers in the loss. Tikhon Chaika stopped 13 shots to pick up the loss in his seventh consecutive start.

FILLING THE NET: Captain Reece Vitelli scored in his third consecutive game when he found the back of the net in the third period of Friday’s game against Winnipeg. It is the longest goal-scoring streak of the Winnipeg, Man. product’s career. His goal on Friday night brought him into a three-way tie for the team lead in goals with 14 to go along with 25 points in 34 games. Since being named the Raiders’ captain on Dec. 8, Vitelli has six goals and 11 points in 12 contests.

GISLASON’S GOAL: After not scoring in his first 44 games, Tayem Gislason has two goals in his past 10 games. The Winnipeg-born defenceman has smashed his previous career bests with a pair of goals and eight points in 31 games during his sophomore season in the WHL.

MAKING HIS DEBUT: Rookie goaltender Max Hildebrand made his first WHL appearance on Friday night, coming for Tikhon Chaika midway through the second period. Hildebrand, a 13th round pick of the Raiders in the 2019 WHL Prospects Draft, stopped 12 shots in just more than 28 minutes of action. Hildebrand was added to the Raiders roster for the remainder of the season prior to the New Year.

ONE AWAY: Niall Crocker’s next assist will tie his career best for helpers in a season. The Delta, B.C. product had four assists in the Hub Centre last season. Crocker has already set highs in goals and points this season with three and six, respectively.

UP NEXT: The Raiders travel to Regina to take on the Pats on Tuesday night at the Brandt Centre. Game time is 7 p.m. The next Raiders’ home game is on Saturday, January 30 when the Brandon Wheat Kings come to town. Puck drop is 7 p.m. Tickets are available at SaskTix.ca.